The official trailer for Hulu’s new star-studded limited series Dopesick has dropped and promises to tug at your heartstrings.

The eight-episode drama premieres Wednesday, Oct. 13 and features executive producer and star Michael Keaton as one of the central figures in its chilling and new two-minute promo.

Keaton plays Samuel Finnix, a doctor in a small Virginia mining town who unwittingly prescribes OxyContin to his trusting patients without realizing the addictive and destructive effect the drug would ultimately have on his community, and the country as a whole.

“My patients trusted me,” Finnix can be heard saying regretfully. “I can’t believe how many of them are dead now.” 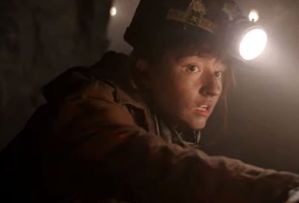 In addition to Keaton, Dopesick boasts a cast that includes Kaitlyn Dever (Unbelievable) as a miner named Betsy; Peter Sarsgaard (The Killing) as Assistant Attorney General Rick Mountcastle; Michael Stuhlbarg (Boardwalk Empire) as Pharma boss Richard Sackler; Will Poulter (The Maze Runner) as one of the thousands of pharmaceutical sales reps who bribed and lied to doctors; and Rosario Dawson (Briarpatch) as a DEA agent.

Dopesick, which dramatizes real-life stories and events, also humanizes the opioid crisis in America and shows every side of the story from Big Pharma to Betsy and Dr. Finnix’s small hamlet, which is ravaged by the drug.