When will Riverdale‘s Toni make music again? Will #OneChicago speed past its big cliffhangers? When might Disney+ power up Ms. Marvel? Read on for answers to those questions plus teases from other shows. (Email any brand-new Qs to InsideLine@tvline.com.)

I’m anxious about how long Riverdale‘s Toni is going to be gone due to Vanessa Morgan’s maternity leave. Do you have any info on when we might expect her to turn up in the back half of Season 5 (which premieres Aug. 11)? I’m hoping she’ll at least make the yearly musical. –F.G.
“Toni is back in plenty of time for our annual musical episode,” showrunner Roberto Aguirre-Sacasa tells Inside Line. “In fact, she’s back in time for our ‘Pussycat’ episode. And she’s performing a musical number with Tabitha Tate and special visitor Alexandra Cabot, which is heavenly.”

The last time we heard from RAS [Riverdale showrunner Roberto Aguirre-Sacasa] about Betty and Archie, he said they were “more than just a booty call” … only for them to end their fling the next episode with Archie referring to her as a booty call LOL. What can we expect from them in the second half of the season? –Anon
I relayed your (ahem) pointed question to RAS, and he wrote back, “LOL. That’s fair. But I will add: Betty and Archie’s story isn’t over yet, and their relationship does deepen, especially as we enter the last stretch of episodes.”

Will Raven and Beast Boy’s relationship be more than friends in Titans Season 3? –Danielle
I’d love to help you out, but Raven/Rachel hasn’t shown up in the screeners I have binged thus far — though Gar has been endeavoring to stay in touch with her while she is off in Themyscira.

Keşfetimde Titans ile ilgili daha çok bilgi istiyorum. –Esmanur
One thing you need to know about Titans‘ Season 3 trailer is that the footage is almost exclusively just from the first two episodes. The story moves fast! 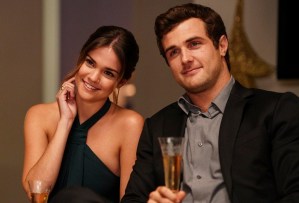 Is there any hope left for Good Trouble’s Callie and Jamie? –Mary
Callie and her new fella, Gael, may be steaming up showers at the moment, but as showrunner Joanna Johnson points out, “Jamie and Callie have a chemistry you can’t really deny, and even though they have conflicting beliefs on some things, I don’t know that Callie is really 100 percent over Jamie, nor is he 100 percent over her,” Johnson says. “What really broke them up was ethical differences, and maybe once they can see that in a different light, they may realize that they’ve overreacted.” Johnson also notes that despite their breakup, “Jamie keeps ending up in [Callie’s] life. There must be something there that’s meant to be in the sense that he keeps ending up being a complication in her life.”

I know that details surrounding the new seasons of #OneChicago are being kept under wraps, but are we in for any kind of post finale time jumps? –Krista
Excellent question! I am hearing that Chicago Fire and P.D. will in fact pick up right where their respective finales left off. I’m not entirely sure about Med‘s plan just yet, though.

I don’t see Game of Talents on Fox’s fall lineup. Is it cancelled, or coming back midseason? –Maddy
The renewed-or-cancelled fate of Game of Talents, as with Name That Tune, remains TBD. 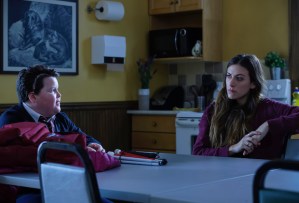 Are we ever going to see Chloe again on In the Dark? –Marie
I am hearing that yes, Calle Walton will appear again as Chloe on the CW series.

On Stargirl, will Courtney’s brother Mike end up in the Johnny Lightning role with Thunderbolt? –Peter
I can assure you that whomever does first avail themselves of Thunderbolt and its very unpredictable powers has a whole lot of fun with it. It’s a highly entertaining episode, helped along by some very nifty visual effects.

Anything on SEAL Team? –Jeffrey
I can confirm that series vet Judd Lormand will put in an appearance as Blackburn in the Season 5 premiere (airing Sunday, Oct. 10). I can also confirm that I told showrunner Spencer Hudnut that, since Bones alum Emily Deschanel guested as Nathan Fillion’s ex-wife on The Rookie, it is now his turn to have Castle leading Lady Stana Katic appear alongside David Boreanaz on SEAL Team. After processing my reciprocal crossover pitch, he responded, “That would be fun! I’m a good fan of hers.” 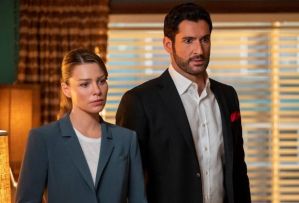 How much is the time jump between Lucifer Season 5 and Season 6? –Sally
It doesn’t feel like too huge a jump, though it is long enough that Chloe is getting a bit curious about why Lucifer hasn’t yet officially started his new job in the Silver City….

Can we expect to any familiar faces to return for Lucifer‘s farewell run? –Isaac
The killer from the supernatural series’ pilot — music producer Jimmy Barnes — plays a pivotal role in an early episode, as Lucifer works through exactly what it will mean to be God.

I binged Season 1 of Evil on Netflix last year and loved it! Do you know if Season 2 will make its way to Netflix even though the show is on Paramount+? –Shea
I think you answered your own question there. Because Evil is now a Paramount+ show, its days of streaming anywhere else are dunzo. 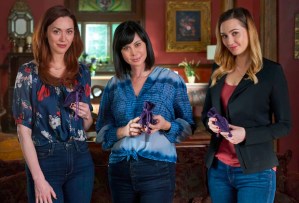 Will Good Witch have any spin-offs? –Pallas
There are no plans at this time for any TV-movies or spinoffs of the cancelled Hallmark Channel charmer.

Any news on Ms. Marvel‘s Disney+ premiere date? Only a week or two ago they were saying 2021, but now by my calculations (after the announcement of the Hawkeye premiere date) they don’t have enough weeks on the schedule without doubling up a couple of episodes. –Lee
I asked around and it is very safe to assume at this point that Ms. Marvel is now on track for an early 2022 premiere.

If you want the Inside Line on a favorite show, email InsideLine@tvline.com! Questions left in Comments will not be read and may very well count against your final score. (With additional reporting by Vlada Gelman)