Warning: The following contains spoilers for Sunday’s Animal Kingdom. If you’d rather watch first, read later, off you go.

Well, OK, Deran! We didn’t know that the youngest of Animal Kingdom’s Cody brothers had it in him, but we’ll be damned. In Sunday’s episode (recapped in full here), he not only stepped up, he walked all over J to the point that his grandkids are gonna be born with footprints on ‘em. What got into Deran? And how concerned do we have to be about big brother Pope’s deteriorating mental state? Here to provide answers to TVLine — and, by extension, you — is showrunner Daniele Nathanson.

TVLINE | Deran freakin’ took charge this week. What possessed him?
Deran gave up the love of his life, in the end, for his family. So with J, there becomes this element of, “Wait, you’re telling me what to do?” He’s paying attention now. A lot of the reason why Deran wasn’t involved in the family business more in the past was because he didn’t want to be around Smurf. But now she’s gone, so he exerts his alpha power. 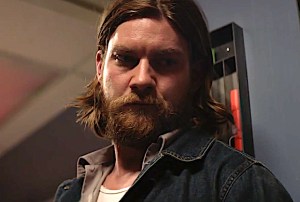 TVLINE | I was surprised that J let Deran push him around so much. “You want money? Here. You want my combination? Here. You want me to sell my condo? Sure.”
Well, J is super, super smart, so he can see that getting into a fight about this right now doesn’t really serve him. It might serve his ego, but doing that wouldn’t bring him any closer to Deran or, for that matter, Craig or Pope. So he’s just trying to manage those shifting dynamics.

TVLINE | I loved that Pam all but laughed at Deran for bringing a gun with him to meet her. He knew by then that killing her wouldn’t get him and his brothers their inheritance, so what was up with that? Is he even thinking straight at that moment?
He is. He just brought it in case something happened and also to show her that he was serious. Keep in mind, he didn’t know how serious she was.

TVLINE | And she is damn serious, just not necessarily the packing-heat kind of serious.
Exactly. [The gun] was more just for protection. Deran doesn’t know who’s in her house or what’s going to happen, so it’s his backup — which Pam calls him on. 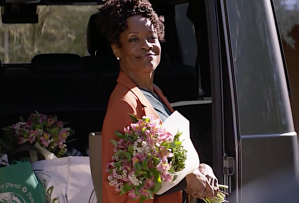 TVLINE | I got the distinct impression that she kinda loved her interaction with Deran. In those first few seconds, she knew who he and his brothers were and was like, “Oh, man — suckers.”
I think this is fun for Pam, first of all because she’s such a confident woman, she’s not threatened at all. And on top of that, she sees aspects of Smurf in Deran. So she’s amused more than anything else.

TVLINE | How worried would you say we should be about Pope after his hospitalization?
He wasn’t hospitalized, exactly.

TVLINE | Well, he was taken to the hospital in a sorry state.
True. And there’s no doubt that Pope is going through something based on the loss of his mother and also the way she went. So we should be concerned, but he’s still Pope. He’ll be making it through. 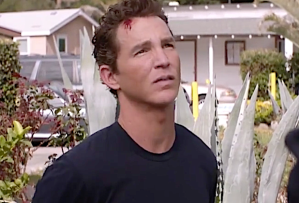 TVLINE | In a way, it’s scarier having him go through this mental thing than it would be a physical one.
Definitely. He’s always had his issues, but if he can have even less control than he usually does… that can be concerning not just for him but for everyone around him. That volatility means we don’t know what’s going to happen with him, and neither does J or anyone else. They don’t know what’s going to happen to themselves based on that.

TVLINE | He’s no longer Smurf’s tool, he’s a weapon potentially.
Exactly. It’s like if you’re a dog handler, and suddenly, that animal is released and nobody controls it. Then it’s even more dangerous in a way.