Although “quieter” than usual, Sunday’s Animal Kingdom was nonetheless monumental for three reasons: 1. Pope, maybe for the first time in his life, got a little help. 2. Deran basically smacked J right the hell down. And 3. Pamela not only smacked Deran right the hell down, but in Charlayne Woodard’s first appearance in the role, Janine’s old ride-or-die evinced a cunning that suggested that she was more than fit to take a load off in Smurf’s throne. Read on for all the details…

‘WE COULD BE SWIMMING IN SOMEBODY ELSE’S FISH BOWL’ | In our 1980s flashbacks, Pope spied Janine getting it on with married man Jake, an eyeful that left the youngster so unnerved that Julia fretted over him more than usual. Later, Janine encouraged Manny to loosen up at a party. And why was she feeling so festive, aside from the fact that she was herself? She’d figured out a way to get ATMs open without setting the money on fire by blowing them up. “Jake’s in,” she noted. “Of course he is,” Manny shot back. “His balls are tethered to your wrist.” Despite Manny’s skepticism, the heist went off without a hitch and left the trio standing in a downpour of wet cash. (Filling the ATM with water before inserting a stick of dynamite seemed to be the trick.) Inspired, Manny wanted to repeat the procedure all the way up the coast. But Janine wasn’t into that; Oceanside was home — right, Andrew?

Speaking of whom… in our present-day story, Pope was in such a state after seeing Smurf blown away by J that he got himself picked up by the police. “Why am I in handcuffs? What did I do?” he asked. Apparently, he’d been wandering around, bleeding and knocking on doors. He hadn’t even known his own name. The partner of the corrupt cop that Deran so recently bribed was eager to let it slide, but his partner for the day insisted that Pope get a psych eval, per protocol. Which, of course, turned out to be a good thing. In no time, kindly Dr. Franklin had deduced that Smurf’s death — by cancer (as if!) — had left Pope so traumatized that he’d begun suffering from memory loss. “Have you ever been diagnosed with anything?” she asked. Mm, no, but “my mom used to give me medicine.” For what, he didn’t know — and now might never know. After advising Pope to remove himself from situations that remind him of the trauma, Dr. Franklin suggested that “I can admit you for 24 hours if you’d like so we can talk again.” To his credit, Pope agreed, almost eagerly. 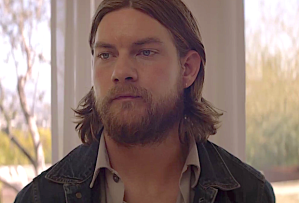 ‘GOTTA RUB HIS STOMACH, DUDE; HE’S LIKE A PUPPY’ | Elsewhere, Deran found himself being stalked by Livengood while he was hanging 10. The DEA agent knew that someone had been sending Adrian money and warned that, soon enough, Deran’s ex would get homesick enough to come back. In other words, “your window for playing ball with us is closing. You don’t want to miss your chance.” Meanwhile, with Renn away at a bachelorette party, Craig hilariously played Mr. Mom, going so far as to body-check a guy on an electric scooter who sped by too close to Nick. He then hired a wise-beyond-his-years surfboard salesclerk — the brother of Crackhead Dave, don’t ya know? — to babysit while he confronted Frankie about her dealings with J. The upshot of that negotiation? She’d settle for two percent of whatever her fence moved for the Codys. “And stay away from J,” Craig added.

Speaking of J… he spent a good portion of the day alternately screwing Allie and fielding — well, dodging — questions from Deran, who was about as over his nephew as a person could possibly get. He even showed up at the bowling alley and demanded both a cut of the petty cash and the combination to the safe — which J handed over, thus allowing Deran to return later and obtain Pam’s address from the file Frankie had procured. Later, on an absolute tear, Deran stopped by Pete’s to inform him that “from here on out, you can talk to me first,” not J. But since the youngest Cody had held up his end of the bargain thus far, Pete wasn’t inclined to rock the boat. “Whatever you’re trying to do with your family,” he told Deran, “you’re gonna have to find another way.” At the same time, Officer Chadwick showed up the Codys’ looking for Deran but settled for J, informing him that Pope had been hospitalized. 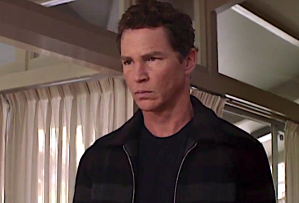 ‘RISK IS EXPENSIVE’ | Once J arrived at the hospital, Pope totally changed his tune about talking further with Dr. Franklin; he wanted to leave, like, now. Heartbreakingly, he had J drop him off to pick up his truck near the house in which he used to live with his mom and Julia (after Pam kicked them out). “Did you find her?” asked a neighbor upon seeing him wandering anew. “Your sister?” Aww, Pope. Elsewhere, J paid a visit to Pete, during which he learned that Deran had been by. Under pressure from his uncle to get rid of the coke, J agreed to cut Pete in for another 20 percent if he’d take it off their hands. So at least it was out of the Codys’ house. At that very moment, Deran was approaching Pam, telling her that he was “hoping we could work something out. The houses, the apartments, everything… It’s supposed to come to us.” Pam couldn’t help but laugh. “I’m supposed to be 10 pounds lighter. S—t happens.” Within seconds, she had put Deran in his place and called him on the stupidity of bringing a gun to a negotiation (at least unless he intended to use it). “Power,” she explained, “can be taken, or it can be earned. Now, you ain’t gonna take a goddamn thing from me. But I might let you earn it — if you and your brothers are as good as you say you are.” In response, Deran just shrugged a kinda “OK, fine,” shrug, and just like that, we had on our hands a new Smurf.

As the hour drew to a close, Craig had the JV neighborhood thieves round up all the scooters they could for him to have them run over. (Dude really has a thing about electric scooters.) At the pool party Allie threw at the Codys’, Deran told Pope that he’d spent the day “handling some s—t.” And Pope? “Same,” he said, adding sadly, “I coulda used you.” As J reported to Deran that the coke was no longer in their possession, a girl at the party helped Pope remove his hospital bracelet. She wasn’t a nurse, she just worked at a pediatrician’s office. “Do the kids get better, the really sick ones?” he asked. “Yeah,” she said. Off that exchange, Pope approached J with a rage brewing right beneath the surface. “You shouldnt’ve done it,” Pope said. “You shouldn’t’ve shot her. You shot her right in front of us.” So, erm, yeah… good party! What did you think of “Power”? Deran’s power play? Charlayne Woodard’s debut? After you weigh in below, click here to find out what showrunner Daniele Nathanson has to say about the ramifications of the episode.