When one is a fugitive in a foreign country, one should probably lay low — unless one is Outer Banks‘ John B. Routledge, who in the Season 2 opener decides that an international manhunt isn’t going to keep him from the Royal Merchant’s gold.

The Netflix series’ return is as summery and caper-y as Season 1 was, albeit with a slight bummer of a start: The Pogues are grieving, under the impression that John B and girlfriend Sarah perished at sea while trying to escape during the storm that capped the show’s inaugural run. But don’t worry: We’ll soon be back to the blunts, bikinis and boats that make this series a frothy summer treat. Read on for the highlights of “The Gold.” 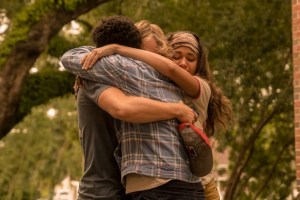 SAD POGUES | JJ, Kiara and Pope aren’t the only OBXers paying respects at the start of the hour: The town gathers for Sheriff Peterkin’s funeral — and of course Ward is there, though the sheriff’s department is suspicious of his involvement in the shooting, and he’s definitely lawyered up in the meantime. The Pogues are handling their grief in different ways: Kiara, for instance, spray-paints “MURDERERS” on the Camerons’ wall and then smokes a lot of weed and asks Pope if he wants to hook up. 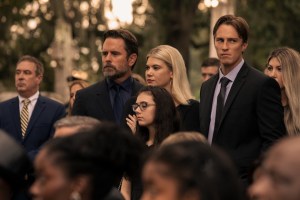 For the record, he totally does. But he knows that she’s in no state to give actual consent, plus, it’s almost time to go back to school. “I went off the rails. I lost my scholarship, and my best friend is dead. Getting high and overcompensating isn’t going to help,” he tells her, waving off the joint she offers. “It helps me,” she says, so very, very high. Meanwhile, JJ gets so angry at a kook in the middle of one of his shifts at the club that he announces that Rafe killed Peterkin, gets into a fight with one of Tapper’s friends and then gets fired. 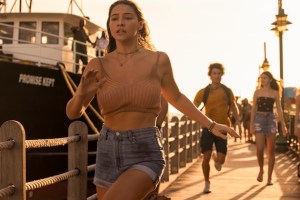 ‘LAYING SUPER LOW’ | Somewhere in The Atlantic, Sarah and John B wake up on a ship. The boat they were on is toast, but they’ve been taken in by a crew headed to the Bahamas. The pair has been there for some time, and there’s very little sense of urgency about them; as they cuddle in the early morning, John B asks Sarah if she wants to get married, and she smiles and says no.

They’d be a lot more worried if they knew that the crew has gotten wind of the $50,000 reward for finding John B. The captain announces to his team that they’ll turn him in once they arrive in Nassau and split the money. And the lovebirds become aware of this plan roughly about the time that the crew locks them in the bridge just as port officials board the ship. The teens bust a window, escape and run like hell, eventually eluding the cops and hiding out at a fancy hotel in Nassau.

And that’s where John B. (temporarily) swipes a housekeeper’s phone and texts his friends a photo of him and Sarah. Back in North Carolina, the Pogues all receive the text while they’re at school; they slip out of class, call the number to verify that it’s him, then cry happy tears as they celebrate their bud’s resurrection. Before he signs off, John B says he and his lady are “laying super low” in the Bahamas, and he asks them to clear his name in the Peterkin killing so he can come home. (And in case you’re wondering, John B returns the phone before the housekeeper even knows it’s missing.)

So Kiara, Pope and JJ go about getting proof that Rafe — and not John B — killed the sheriff. Their plan? Plant a phone in the car belonging to Ward’s pilot, who saw everything and knows the truth. Kiara calls the man, whose name is Gavin, and freaks him out by saying she knows Rafe was the real killer. As the kids hope, Gavin then calls Ward and says he wants to renegotiate their deal. Turns out, he kept the gun that Ward told him to get rid of, and now he wants triple the cash he was promised, plus Ward’s plane. As a hidden Pope eavesdrops, a highly not-pleased Ward tells Gavin to bring the gun to a meet-up, and he’ll bring the money. 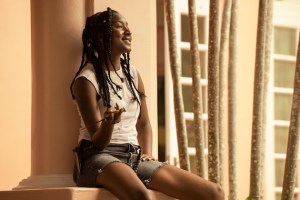 GOLDEN HOUR | For a short time, life as hotel stowaways is idyllic. Sarah and John B sneak food off room service trays, sleep on pool loungers dragged to a hidden section of the roof and slow-dance in front of the altar as the hotel staff sets up for a wedding. But the kids are very aware of the danger they’re in: One night, John B has a nightmare that Wade is choking him and screaming that he can’t take his gold.

Remind me: What’s the opposite of laying super low? Oh, it’s exactly what John B chooses to do after he wakes up from the bad dream? Cool. While Sarah snoozes on the lounge chair next to him, John B runs over to the Cameron estate, swings himself over the gate and breaks into the house… where he finds the safe full of gold, but can’t open it.

Sarah wakes up, notices John B is nowhere to be found and leaves the hotel, looking for him. But after a hotel staffer makes a call, the captain of the ship that brough her to the Bahamas catches up to her, and one of his crew grabs her from behind. And when John B returns to the hotel the next morning, one of the crew members — her name, we learn, is Cleo — informs him that his girlfriend is gone. John B threatens her, but she whips out a knife and manhandles him seven ways to Sunday but ultimately chooses not to slice him, mocking him by saying, “You’re too pretty to cut.”

Cleo brings John B to where the captain is holding Sarah hostage. They offer him the gold from their backpack — “143,000 reasons to let us go,” Sarah says — and he takes it… but then informs that that that is his rescue fee, and he wants the bounty for turning them in to the police. So John B blurts out that there’s a buttload of gold at Ward’s island home, and Sarah can lead them to it.

IS JOHN B CAUGHT? | So she does. But while John B, Sarah and the crew are in the vacation home, Ward gets an alert on his phone from his front-door security system. Just as the rental cops are arriving to check things out, Sarah enters her birthday into the safe and it opens: And yep, it’s really full of all of the Royal Merchant booty.

When the captain realizes that they’re about to get caught, he locks John B and Sarah in the house and he and his crew get away. Eventually, John B is Spider-Man-ing all over the roof and Sarah is sneaking around to a small cove at the back of the property. But then the wily captain and his men take the boat she was planning to use as a getaway vehicle, and John B gets captured and beat by the security guards.

The guards FaceTime Ward, who demands to see the face of the person who broke into his home. And as the guards haul John B’s face up and bring the phone around… the episode cuts to black!

Now it’s your turn. What did you think of the episode? Grade it via the poll below, then hit the comments with your thoughts.