Warning: This post contains spoilers from Kung Fu‘s Season 1 finale. Read at your own risk.

Whether it’s dropping out one semester shy of graduating from university or training for three years at a monastery, Kung Fu‘s Nicky Shen is keen on carving her own path in life.

Wednesday’s season finale saw Nicky again take control of her destiny when she decided to release Biange back to the earth, rather than destroy it or wield the ancient Sword of Liang Daiyu. Her decision seemingly breaks the tumultuous cycle her family has endured for generations as Daiyu’s direct descendants. 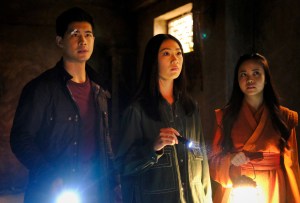 Releasing Biange is a game changer, which Nicky alluded to when she told her brother Ryan that she felt different. Whether she meant that physically (new powers???) or just emotionally remains to be seen — Kung Fu has already been renewed for Season 2 — but Liang has her own interpretation of what Nicky meant by that.

“After everything that we’ve seen her go through in Season 1, and how headstrong she’s been about finding Zhilan, finding the weapon, stopping Biange, it was really refreshing to see Nikki at the end be like, ‘I don’t know what’s next, but I know that I want to get boba with my boyfriend,'” Liang explains. “A huge weight has been lifted off her. As far as she’s concerned, things are going to go up from here, and the threat is not imminent. I think she just feels lighter.”

Nicky might be relaxed for now, but it looks like the trouble is just beginning. During the finale’s final moments, Evan revealed that Russell Tan has bought off politicians and the DEA and snatched up prime real estate. Plus, he’s hiding a secret weapon the Shens probably have no idea exists: Nicky’s long-lost cousin, who happens to be the daughter of both a guardian warrior and, according to Tan, is the “key to everything.” In one last twist, we saw a Biange blossom peek through the sidewalk.

“I know that Biange energy has definitely followed [Nicky] to San Francisco,” Liange teases. “Because she’s part of the bloodline of warriors, and the Shen siblings and Mama are also a part of this, I think they might get a little bit more involved with the magic and the mythology of it all.”

Liang doesn’t yet know what will happen in Season 2, but hopes the introduction of Nicky’s unknown cousin sets up a complicated family battle in which “someone who’s part of Nicky’s family now has to be her enemy.” As for other wishes for next season, she is also looking forward to exploring more of Nicky and Henry’s blossoming romance outside of the library. 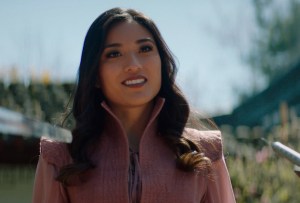 “I don’t want to see them researching ancient weapons anymore,” she shares. “I want to see them go on a real date that involves an activity and some food and they talk about some of the stuff that Henry teases in Episode 4 about his family and background. I’m excited for them to have a normal relationship that doesn’t revolve around magic, weapons and murderers, and destiny.”

When it comes to Zhilan, who was arrested at the end of the hour, Liang hopes to revisit the murderous guardian with a new mission. “I think it would be so cool to see Nicky go up against this bad person, and the only person that can help is Zhilan,” Liang muses. “We visit her in her jail cell, and she’s still as fabulous as ever, and she probably has some of the wards under her spell. I think that would be really fun.”

Liang’s additional Season 2 hopes include seeing resolution for Althea after breaking her NDA, seeing what happens with Harmony Dumplings, exploring Ryan finding love or flourishing in his career, and seeing Nicky find a job and move out of her family home.

What do you all think of Kung Fu’s finale? What are your hopes for Season 2? Grade the season ender below, and let us know your thoughts in the comments.