Loki‘s first season finale wasn’t just a stopping point for the Disney+ series: The episode also served as a farewell of sorts to the preceding 13 years of Marvel films, by way of an opening sequence that paid homage to the MCU’s existence thus far.

The July 14 finale, like most episodes of Disney+’s Marvel series, began with the Marvel Studios logo, this time accompanied by dozens of memorable sound bites from MCU characters. “Wakanda forever!” Black Panther‘s T’Challa shouted. “Higher, further, faster, baby!” said Captain Marvel‘s Carol Danvers. The voices of Thor, Steve Rogers, Natasha Romanoff and plenty more played over the logo, which eventually gave way to a trippy, physical representation of time and space. And alongside audio from the MCU, music and quotes from real-life personalities — like Nelson Mandela and environmental activist Greta Thunberg — could be heard, as well.

The opening sequence was particularly bittersweet for longtime MCU fans — but according to Loki director Kate Herron, the intro didn’t include Marvel characters until late in its development.

“We had this opening for Episode 6 that [writer] Eric Martin had written, where he said, ‘Oh, it’d be cool to do an homage to [the 1997 film] Contact,’ because we wanted the show to be a big love letter to sci-fi,” Herron explains to TVLine. “We were going to go through space until the end of time, and we’d see the Citadel in the physical timeline.”

As the idea came to fruition, one of Loki‘s storyboard artists suggested making the Sacred Timeline circular instead of a straight line, which Herron quickly co-signed. 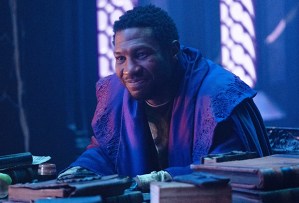 “I thought that was such a good idea, because it showed how the TVA always perceived [time], and how it’s so different in reality,” she says. “It shows how limited their knowledge is, which makes He Who Remains all the more impressive. I thought that was exciting.”

Herron’s ideas for the scene’s accompanying sound changed quite a bit. At first, she suggested total silence for the sequence, “because it’s space, and it’ll be silent, and it’ll be crazy!” she remembers. Later, though, she and her editing team settled on a “soundscape” of Earth, which included noises like a baby crying, ambient sounds from the city and the jungle, and famous quotes throughout history.

And though Marvel Studios execs enjoyed the initial soundscape when Herron presented it to them, it was Marvel boss Kevin Feige who suggested adding MCU sound bites over the logo.

“He was like, ‘It gives me an idea, hearing those quotes [from history]. We’ve never done quotes from the MCU ever on the logo,'” Herron recalls. “And I was like, ‘Oh, that’s so cool!’ That lit everyone’s brains up.”

Alongside editors Emma McCleave and Sara Bennett — both of whom “really crafted [the intro] and made it what it is,” Herron says — she then worked to pick suitable quotes from the Marvel films, which were aligned as much as possible with the characters who appear during the logo’s formation. All told, even though the opening sequence was completed “quite late” in the finale’s post-production process, it became a scene of which Herron — who will not be back for Loki‘s second season — is quite proud.

“It’s this beautiful [tribute] to what’s come before, but then we get this fun handoff [to what’s coming next],” she says. “I want to watch it in a planetarium or something. It was so much fun doing it.”