The Netflix series returned Thursday, serving Devi a whopper of a romantic quandry: Date smokin’ hot Paxton, whom she pursued with a passion last season, or super-smart Ben, her academic rival-turned-surprise-boyfriend-prospect? Both are distinct possibilities, as she and Ben make out in his car after she spreads her dad’s ashes on a beach. But when she returns home, she finds Paxton waiting outside her house, where he apologizes for being distant after they kissed. What’s more, he invites her to dinner the following night. 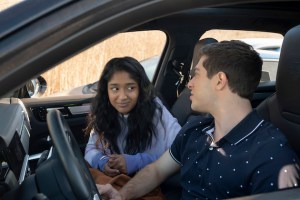 Of course, Devi shares none of this with her mother Nalini, who is preparing to travel to India to suck up to their relatives in advance of their big move. As part of the preparations, she meets with Dr. Jackson (played by rapper/Hell on Wheels‘ Common), a dermatologist in her office building. She wants to sell him her client roster and he eventually agrees to the transaction, mainly to humor her — in a charming way, he makes it clear that he’s got a very successful practice — and, yep, he’s definitely flirting with her.

Devi has Eleanor and Fabiola over to break the news of her move as well as of her Ben/Paxton situation. “This is my last chance for an American high school boyfriend,” she declares, and pretty soon, they’re making a pros/cons list for both boys — even though both Eleanor and Fab immediately choose Paxton. After all, as Fabiola points out, “Ben is an obnoxious hobbit who has tortured you for countless years. Paxton is a mixed-race hottie who got scouted to model while sitting in the audience at The Price Is Right.”

Armed with that sentiment, Devi goes to Ben’s to break up with him. But he greets her with his own enthusiastic update: He dumped Shira, because “it wasn’t real. What you and I have is.” And he wants to be her boyfriend, taking a page from Luke Danes’ playbook and vowing that he’s “all in.” So they kiss, and Devi leaves… and goes to Paxton’s for their dinner. 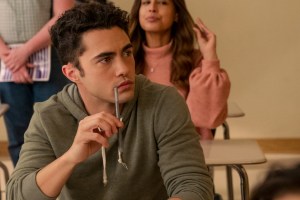 But Paxton’s idea of a date differs greatly from Devi’s: When she gets there, he’s playing Call of Duty with Trent and Marcus. They order pizza, it’s in no way romantic, and Devi leaves disappointed.

But, at least she gains some clarity! So at a school-run park clean-up soon after, Devi officially tells Ben that she wants to be his girlfriend. Paxton notices the two of them paired up and gets Devi alone for a minute, asking why she didn’t ask him to be her partner during the volunteer event. She references the Call of Duty night and he counters that that’s how his dates always go — his friends stick around until it’s time to hook up. He offers to take her on a real, one-on-one date to make up for it, but she says it’s not going to work, because she’s moving to India soon. “I guess we’ll have to make this time count,” he counters, kissing her.