With only two episodes of Good Girls left, there’s unfortunately still a lot of ground to cover. Despite the fact that we may (read: probably will) be left with an inevitable cliffhanger in lieu of the show’s recent cancellation, Thursday’s episode pushed the story forward in two major ways.

First, dissension between Rio and Nick was turned up to 11, and the drama of Beth being caught squarely in the middle was — and would’ve continued to be — absolutely delicious. Secondly: Was Beth’s complete annihilation of Denise’s confidence and campaign perhaps a preview of the absolute boss we always knew she’d become? We can now only daydream of the season where Beth would’ve been the one calling the shots and raising the hell.

Alas, so many questions remain! Will Beth win her seat on the city council? How will that affect her relationship with both Nick and Rio? And with the agents back in action and hungry for a kill, will anyone land behind bars before we have to bid farewell to these Michiganders? Sigh. While we might never get the answers we’re hoping for, let’s break down what did happen in the antepenultimate showing. 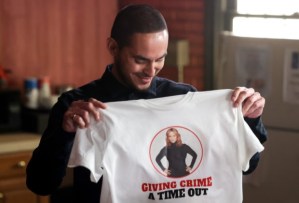 As Beth preps for her city council campaign, Dave and Phoebe explain that they need her to win the seat in order to help to bring down Rio and Nick. It’s a whole conundrum full of shell corporations, city budgets and yada, yada, yada, but the beauty of Beth’s situation is that Nick needs her just as much as the agents do. While Phoebe is definitely still miffed about the evidence Beth stole (“She’s great at pretending to be something she’s not.”), everybody wins, says Dave, if Beth can just get the signatures she needs to run and take the election home.

Dean tells the pyramid bros (whose names I refuse to ever know or remember) about Beth’s political endeavors, and as it turns out, they’ve got the county DA in their back pocket. “How do you think I win all my cases?” asks DoucheBro #2. Dean hopes everything will be as quick and painless as possible, buuut we’re going out on a limb and guessing it’s gonna be messy af.

Denise Carpenter, one of the women who tried to prevent the club’s reopening, is also running for city council. As Beth, Ruby and Annie approach her press conference, they hear her say the city can’t give away the seat to a woman “who doesn’t share our values.” “Looks like you just got out mom’d, brah,” Annie quips.

The women start hustling their club clientele for campaign donations, and as the cash flows in, Rio wonders what all this political mumbo-jumbo means for Beth. “So you just do whatever Nick says, huh?” he asks. “Don’t you?” she responds. (YES, BETH. GET HIM.)

“That’s what you think?”

“I just know he’s in city hall, and you’re in a strip club.”

Her retorts are savage and amazing… that is, until he swipes a cut of her funds. When she tells him it’s not his money, he says: “Take it up with city hall.”

A peeved Nick then pays Rio a visit and tries to explain that it “isn’t about her,” and that if everything goes to hell in a handbasket, it won’t be him doing the time. Rio knows exactly what that means. “You’d make sure it was me,” he says.

When Kenny gets in trouble at school for graffiti, inspiration strikes. Beth incorporates cleaning up the streets into her campaign, and as she explains her new position to the media, we see Ruby, Annie and Mick plastering some buildings with colorful art of their own. When Beth and Dean rewatch the interview on TV, Dean spots a man who looks awfully similar to the pyramid bros’ DA connection. And that man is slinging some lattes at Starbucks. Hmm…

Beth seems to be getting a leg up on her competition, until Denise offers her a job. She uses Dean’s legal trouble as leverage, implying that Beth should drop out of the race, and work for her instead. 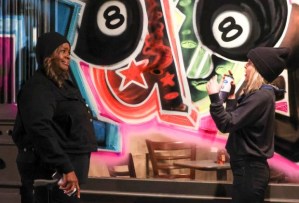 Later, Beth swings by Phoebe’s hotel to ask for the cash plate back. She wants to replace the evidence she took from the agent, so that Phoebe can say it was just misplaced. Despite the fact that Rio made her do it, Phoebe feels slighted that Beth didn’t trust her, but Beth can’t fathom how any trust could have possibly existed between them in the first place. It’s all moot, though. The plate is back in D.C. “Do to her what you did to me,” Phoebe suggests.

Beth struts over to Denise’s home and brings a little backup with her: Mick. The gangster smashes his way through the house, then points a gun directly at Denise’s head. Beth picks up a picture of the woman’s figure-skating daughter, and cheerfully says that Mick loves figure skating. And he’ll be at every practice and every show. In pure fear, Denise says she’ll leave him (Dean) out of it, and she won’t tell anyone a thing. “Oh, hey. Thank you for your support!” Beth cheerfully says on her way out. Mic. Drop.

Dean confronts DoucheBro #1 to ask WTF is up with Starbucks guy, and whether or not the evidence was submitted to a real DA. Homie only says to ask Stan. “You’re not the only one in a tight spot,” he tells Dean.

When Beth and Kenny get home from hockey practice, they find all of their old boxes back in the house, safe and sound. She gets a text message and opens the back door. Rio’s there with the shoebox of money he lifted from her. She asks why he decided to return everything, and in pure Rio fashion, he doesn’t actually answer. He comments on her campaign, before saying: “I told you you didn’t need him.” He grabs one of her campaign tees and leaves. As he walks to his car, one of the pyramid scheme guys watches him drive off.

Why did Rio return all of Beth’s stuff, and were you surprised by how she handled the Denise sitch? Drop your thoughts in a comment below!