Disney+’s Loki, with what we now know is but its first season finale, introduced a major character from the MCU. And Wunmi Mosaku’s Hunter B-15 just might have done a double take when she first laid eyes on him!

As highly speculated — though the actor just weeks ago attempted to throw our sister site Variety off the scent, saying of a possible Loki appearance, “I have no idea what you’re talking about” — Lovecraft Country‘s Jonathan Majors loomed large in the Marvel series’ Season 1 finale, playing a character referred to as He Who Remains.

Majors of course is due to star in the MCU film Ant-Man and the Wasp: Quantumania (in theaters February 2023) as the Marvel villain Kang the Conqueror. And though his Loki character acknowledged he has been known by “many names” including as a “conqueror,” the name Kang was never stated outright. 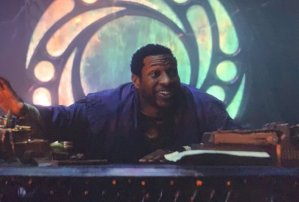 Kang’s backstory, though, matches up with a story that He Who Remains told about a variant of himself who, long, long ago, as a scientist from the 31st Century, discovered other universes stacked on top of our own. Alas, other variants of said scientist did same, a power struggle ensued, and…. yada yada yada… He Who Remains tamed and weaponized Alioth to end that multiversal war and formed the TVA to maintain one timeline and avoid others. (Read our full finale recap here.)

This news story won’t spoil the Loki finale any further, but suffice it to say, Majors will certainly be seen again — in Ant-Man 3, as known, if not other places.

Want scoop on Loki Season 2, or for any other show? Email InsideLine@tvline.com and your question may be answered via Matt’s Inside Line.