Speeding toward its milestone 150th episode (aka Part 1 of the Season 7 finale, airing this Tuesday at 8/7c), The CW’s The Flash reunited Barry Allen with grown daughter Nora… as well as introduced him to his and Iris’ son, Bart!

It’s a lot for the yet-to-be-dad (played by Grant Gustin) to process, especially amidst an explosive, season-ending war between Godspeed clones. Will having WestAllen’s speedster kids at the ready help, or possibly hurt, Team Flash’s cause? Jordan Fisher (Grease Live), who last week made his (brief but flashy) debut as Bart Allen, shared with a TVLine a peek at the 2049 superhero’s impulsive ways — as well as teased Cisco’s imminent encore.

TVLINE | Tell me all about Mr. Bart Allen. From his first scene alone, he seems quite full of life.
A hundred percent, my God. There are a lot of things I love about Bart, but the thing that makes him most attractive to me in terms of a superhero to play as an actor is the humanity that he has. Another thing I love about him is how cool he knows he is. [Laughs] He knows  — it’s not even a question! — that he has the most style of all the speedsters, he’s got the most flair, he’s got the moves, he’s the only one who is parkouring off of stuff…. It’s all fun for Bart. He understands that he has all of these crazy, awesome abilities, and instead of being really calculative with all of it and being cautious and careful, he’s like, “Dude!” [Laughs] His impulsivity, which is obviously where his name comes from, is a strength for him. No one can predict what he’s going to do because he doesn’t even really know! Saying he’s “full of life” is the best way to sum it up. He feels everything in extremes. When he is angry, he is angry. When he is thrilled, he is over the moon. And that is a direct reflection of his heart and his soul.

TVLINE | How would you describe the dynamic between Bart and Nora (played again by Jessica Parker Kennedy)? We haven’t seen her with a brother before.
No, we haven’t. We haven’t. But while he’s that “annoying little brother” for her, she loves him to death. They both just adore each other, because at the end of the day they are siblings. And they’re siblings first, before they are superheroes, before they are partners in crime.

TVLINE | But to be clear, they’re not twins, right?
Yes, yes. To be clear, they are not twins, and we learn about that instantly. People should be able to tell [Laughs], just in terms of how they are as people and how they act. He’s definitely a little younger! But that only adds to the dynamic of, “My God, you’re so freakin’ annoying!. But I love you and I got your back, I promise.” 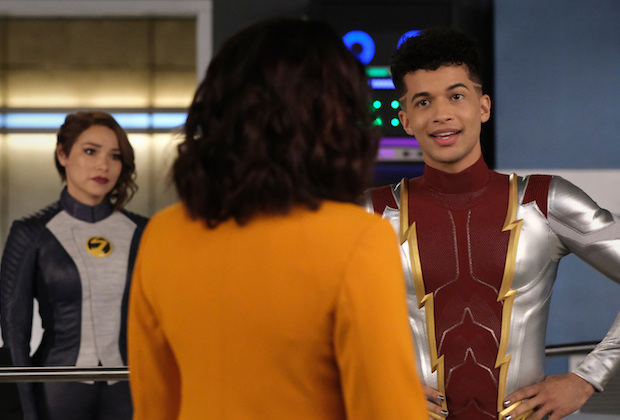 TVLINE | When Nora first appeared on the show, things were kind of chilly between her and Iris (Candice Patton), for reasons. How do Bart and this Nora get along with Mom?
Bart is a momma’s boy. At the end of the day, that’s what he is. What’s nice is that now that all four of us are established as Mom and Dad and daughter and son, we get to really mess around with what this dynamic is like as a family. Like, what’s the difference between Barry and Iris and Nora and Bart, rather than The Flash and XS and Impulse? How do they function when they are superheroes out in the field together as opposed to when they’re all at Joe’s house, hanging out talking?  With Bart being such a momma’s boy and loving Iris as much as he does, Nora gets to take little bits of what Iris does, or how Candice [Patton] has portrayed Iris, and have moments to be a calming force for Bart when things start to get out of hand — which of course whenever Bart is in the mix, it can be!

TVLINE | What are you allowed to say about what exactly has brought Bart and Nora to the year 2021?
I’m not! [Laughs] I’m not allowed to say. But we will find out very soon.

TVLINE | For much of Nora’s previous arc, she was hiding important things from her parents. Do Bart and Nora have secrets they’ll be keeping?
I think that anybody that comes from the future is going to have information that we do not, and I think that it is very important that those people keep what needs to be a secret a secret, so as to not affect the timeline. And I am doing the same thing right now, as to not affect the show! [Laughs] So that’s that. 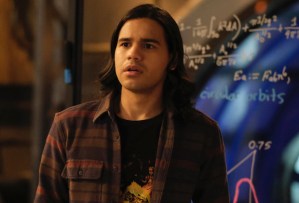 TVLINE | One thing we know for sure is that Mr. Carlos Valdes is due back in these final two episodes of the season. What can you tease about the first time we see Cisco again?
Carlos is one of the most fun people that I have worked with. We’re very similar in a lot of ways, I think that we just got each other pretty instantly, so hopefully that dynamic comes across.

As for the actual way he returns… it is epic. And he is epic. That moment is a huge moment.