The Chi character’s guilt over cheating on her wife, Dre, has been growing in intensity — and therefore ever harder for her to conceal — in the weeks since she went home with that rando from the bar. So it’s not surprising that Nina confesses to Dre in this week’s episode, but still… what’s that social media chestnut? Ah yes: You hate to see it.

The big admission takes place after a little baby shower at Nina and Dre’s place because Kiesha made good on her statement from the end of the previous episode: She’s reclaimed her infant son from Octavia, and has decided to raise him herself. So Tiffany, Jada (with a newly shaved head, thanks to her chemotherapy hair loss), Dre and Nina put together an impromptu celebration. It’s probably not a good sign when Emmett (who’s there to drop off a gift) sees Nina drinking and says, “You’ve got some s–t you’re trying to forget, huh?” and he’s so dead-on about what she’s feeling, she angrily asks him, “Boy, who you been talking to?” But it’s all just a guess, based on how he has acted in the past when he’s screwed around. And as they share some cocktails, he advises her to come clean about her secret, because it’ll only get worse the longer she waits. 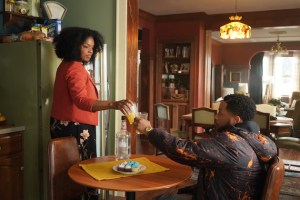 And in a quiet moment during the party, while Jada is thanking Nina for “sharing” Dre with her, Nina does a test run by admitting to the affair. The look on Jada’s face… oof. And then later, after everyone has left for the evening, Nina does it for real. She can barely get the words out, she’s crying so hard. “I was with someone else,” she says, apologizing as Dre starts to scream “No!” It’s rough.

* Kiesha takes her time naming her son. After she wakes from a nightmare about Omari and her kidnapping, she remembers Ronnie’s role in rescuing her. So she decides to name the little boy Ronnie.

* Emmett wants to take Tiff out for a real date, but she’s supposed to sell edibles at a sex party. So he goes with her, gets an eyeful and then they have a brief conversation with the party’s hosts about how to have a successful open relationship. 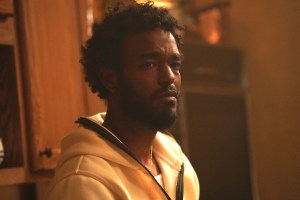 * With Douda’s help, Trig and Imani get Nuck bounced from the trap house. At first, the women being kept there are angry, demanding to know where they’re going to live and how they’re going to get by. But then Imani floats the idea of the women keeping the house for their own, and it seems like it might work.

* Trig and Tracy’s community protection group does also seem to be working well; we see a montage of community fridges, crimes being stopped and little old ladies being helped across the street. But things get less rosy when there’s a repeat domestic situation at Jamal’s apartment. This time, a gun is involved. And when Jamal gets the weapon away from his brother-in-law, who’s there to defend Jamal’s wife from her husband, he shoots the man in the chest and runs away. As the ambulances arrive, it looks like the brother-in-law is a goner. Douda’s take on the situation? He tells Trig to “be more careful.” Helpful! 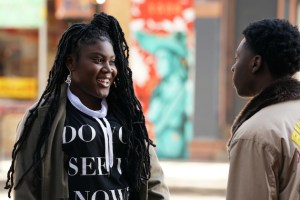 * Jake sets up an elaborate promposal in his room in order to ask Jemma to go to the Spring Fling with him, and she says yes, then they dance. It’s very cute!

* Kevin runs into Lynae — whom he bumped into when he was volunteering in the last episode — and realizes that she’s got a copy of a videogame he wants to play. She invites him to a lounge on the West Side where they play. Afterwards, he asks her out but she says she doesn’t think of him that way. Still, she puts her number in his phone before they part ways.