Warning: The following contains spoilers for Sunday’s Season 5 premiere of Animal Kingdom. If you’d rather watch first, read later, move away from this recap as quickly as a Cody from the straight life.

Almost two years (!) after the Season 4 finale of Animal Kingdom (refresh your memory here), the criminally addictive TNT drama came back with a vengeance Sunday night, teeing up a Season 5 premiere that left three characters dead and ushered in what might just be a whole new Pope. Or at least a somewhat different Pope. Read on, and I’ll explain…

‘THIS IS ALL SMURF’ | First, let’s discuss what went down in the ’80s flashbacks in “Red-Handed.” By that point in our timeline, twins Julia and Andrew were moppet age, the former already a pro at rolling Mom’s joints, the latter showing every sign of OCD short of writing the letters with the pickles that he retrieved from his Happy Meal. Janine, as you’d expect, was making herself a frontrunner for Mother of the Year, teaching the kids how to pick pockets and shoplift, and turning loose Pope on a brat who made the mistake of splashing his sister in the pool. After Andrew nearly drowned the offender, Janine began to pack up her children to vamoose before the cops answered the victim’s mother’s call. Smurf just couldn’t quite let it go, though. Instead of simply consider herself lucky that the police hadn’t shown up and asked where she’d gotten the stolen credit card she was using, she lit a fire that blew up the woman’s car — delighting Pope in a most troubling way. Later, sensitive Julia worried aloud that all their moving around wasn’t good for her brother. He needs more, she told Mom. More what? “Just more something.”

In the present, the Cody boys panicked, knowing that Pope’s now-fatherless cousins were aware of their Oceanside address and would soon be paying them a house call. Pope’s solution? Return the $1M in gold they’d stolen on Smurf’s last hurrah. Deran agreed. Craig, not so much. The rocket scientist of the family wanted them to just hide out until it all blew over. As if Smurf murdering these guys’ father was something that was going to blow over. No, said Pope, they had to give back the gold. It was that or kill them all, and they couldn’t do that. “They’re blood.” The following day, the guys staked out the mail-drop storefront to which the truck Pope had left behind at the compound was registered… and discovered that they’d already missed Jed’s boys. They’d beat up the clerk and taken the address of Smurf’s apartment. Um, what apartment? wondered the Codys as if they didn’t know Mama would never run out of secrets. While stashing the gold in a storage facility with Deran, J questioned whether something needed to be done about loose-lipped Adrian. “I handled it,” replied Deran. How? “It’s handled.” Well, OK then, Olivia Pope! 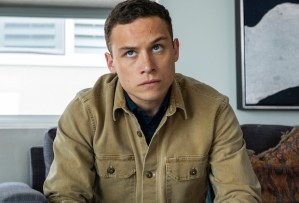 ‘MORNIN’, FELLAS’ | At Smurf’s secret hideaway, the Codys got the drop on Pope’s cousins — including Nick Stahl, fresh from Fear the Walking Dead — and negotiated to return the gold. Which was all well and good, but Jed was still dead. Yeah, well, so is Smurf, replied J. He’d shot her himself. What happened at the compound, “it wasn’t about you,” Pope told his newfound relatives. “It wasn’t about us.” It was all about Smurf settling old scores. Unusually reasonable, Nick Stahl (whose character’s name I never caught, did you?) not only agreed to take the money and run, he suggested that Pope come by sometime, seeing as Colin was buried on his brother’s land. Afterwards, Pope declared to his crew, “It’s done.” Which meant that obviously it wasn’t. That night, Nick Stahl & Co. cut the power at the Codys’ and lay siege to the place wearing night-vision lenses. One by one, Jed’s boys were dispatched — with Odin meeting an especially grim end at Pope’s hand in the pool. (He’s always been a drowning enthusiast, we’ve known since Season 1.) While the smoke cleared, Pope, Craig and J loaded up the bodies — including the not-quite-dead Nick Stahl’s — and scrammed, leaving Deran to pay off a cop not to investigate the neighbors’ complaints of gunshots too thoroughly. “This s—t never happened when Smurf was alive,” he remarked. “Better tighten up.”

Meanwhile, Pope sent away Craig and J — he’d deal with the bodies himself. Cue Nick Stahl’s eyes widening in horror. After driving to a remote location, Pope had Nick Stahl dig a grave in which they dropped the bodies of his brothers. Then it was Nick Stahl’s turn to climb in. “‘Take out the trash, Andrew,’” Pope could imagine his mother saying. “‘That’s what you do.’” Or at least that was what he would’ve done — would’ve had to do. “She’d make me do it,” he noted. However, left to his own devices, he could make a different choice — which, maybe for the first time in his life, he did. He let Nick Stahl go and… well, “enjoyed” is probably too strong a word. At least he got a taste of what life could be like out from under Smurf’s thumb. So, what did you think of the premiere? Will Pope come to regret sparing Nick Stahl? Read showrunner Daniele Nathanson’s take on the twist here, then grade the episode below.