What would a show about teens be without at least one hormone- and drug-fueled rager?

In the season finale of HBO Max’s Generation (now available to stream, SPOILERS ahead!), a party at Riley’s house turned into a tornado of alcohol and emotions. Not only was there a break-up (Chester and Bo!) and a make-up (Riley and Greta!!), but the cliffhangers were aplenty, as Riley stopped just short of admitting her hotel hookup to Greta, and later, a mysterious suitor arrived to cheer up a brokenhearted Chester. (Any idea of who it might be? Drop your thoughts in the Comments!)

Below, co-creators/executive producers Daniel and Zelda Barnz break down all of the drama, secrets and heartache that went down in the jam-packed finale, and toss us some hints as to what might be in store for the gang in a potential Season 2.

TVLINE | Before we dive into the finale, can you tell me a bit about the genesis of Generation? What made you want to tell these specific stories?
ZELDA BARNZ | I came out when I was 15 years old. Since then, I started having all these open and honest conversations about sexuality and identity with my family. It inspired this idea for a show that took an honest and frank look at teenage identity. It was something that was really important to me because I felt like at the time I was coming out, I was seeing a lot of media that depicted queer stories as very sad. There were stories of queer pain, suffering and torture, and I wanted to see a show that celebrated queer joy. So, we started talking about these characters and this idea, and it blossomed into what it is now.

TVLINE | The way the finale is shot feels very much like the Richard Linklater film Slacker, with the camera drifting throughout the party without many cuts. How did you pull that off?
DANIEL BARNZ | That’s such an incredibly kind reference, because I love that movie. We really wanted to finish the season with a very immersive-feeling finale. We thought a lot about how to construct and film this so that you feel like you’re there at that party, and it feels as stressful and chaotic as it does to these characters. We realized the way to do that was to not intercut between scenes, so that it felt like you were moving in between them in real time. Zelda and I wrote it and I knew I was going to direct it, so we were able to write knowing exactly how we wanted to shoot it.

When we shared the script with the cast, they were so excited. We got them all to go to Riley’s house on a Saturday, and we rehearsed the entire episode. We ran it like a play. Our phenomenal director of photography Laura Goncalves recorded the rehearsal on her iPhone, so we have this 27-minute video of all of our characters in the house and her running down the side alley, whipping between them and running after them. It was such an incredible exercise and so exhilarating! The cast was so pumped. And because we had that rehearsal, we were able to shoot it over the course of two very long weeks where we were shooting all night. 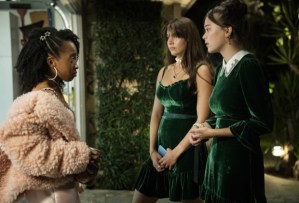 TVLINE | So much happens in the finale’s party scene! Let’s start with Bo and Chester’s break-up. Was it just Bo’s insecurity that pulled them apart, or is there something else there?
ZELDA | There’s a lot there. His insecurity is absolutely playing a huge role, because Chester is a very magnetic presence, and Bo feels a little boring next to him. He doesn’t like that dynamic. I don’t think he was lying to Chester, but I don’t think it’s the full truth. We talked a lot about getting inside Bo’s head, because we are so often in Chester’s perspective. It would be really hard to feel like you’re dating somebody who’s so incredibly confident and magnetic, [especially if] they just had this thing where they were fake-dating another person after they had expressed interest in you.

The whole Nathan scenario contributes to his insecurity and makes him feel like Chester has so many options, which is very intimidating. It’s also hard for Bo to see how Chester treats Nathan. Nathan is clearly still in love with him, and Chester started fake-dating him for what he thought was a favor, but really it’s just hurting Nathan more because Nathan does want to be with him. Bo sees that and has a bit of a moral issue with that.
DANIEL | I think Bo picks up on this natural chemistry that exists between Nathan and Chester. He’s been seeing it since Episode 13 and even in 15 when Chester and Nathan are literally talking about how they have no chemistry in front of Bo. It seems to signify that they actually do have chemistry. The other piece of it is that Bo feels like maybe Chester is secretly harboring feelings for Nathan and that’s why when Nathan tries to repair the Bo and Chester relationship he says, “Oh, I’m just his yappy Chihuahua,” and Bo’s like, “No, I don’t think so.”

TVLINE | Chester is an icon in the making. When you were casting that role, what were you looking for and why was Justice Smith the right actor for the part?
DANIEL | He was a character that was inspired by this person who went to Zelda’s school, and I just loved hearing stories about this guy. He was head of the Rainbow Alliance, but he was also student body president and immensely popular, but would wear high heels to school. It was just so different from what popularity looked like when I was going to high school. We wanted to create a character who was refreshingly so many things. Who could be out and queer, and an incredible athlete accepted by his teammates, but who also wears his grandmother’s clothing, and could quote Kafka and RuPaul.

When we were casting the role, it was a daunting challenge. We conducted a wide search. Justice originally came in to audition for the counselor role and we asked him to come back in for Chester. What I think is important to stress: Justice is a phenomenal actor and it seems like he is Chester, but when you look at his body of work, he never did anything like this before. That’s a credit to his craft as an actor. He worked really hard to construct this role, to get the physicality right, to get the vocal inflections right, and then to fill it out with emotional depth. It’s really extraordinary. 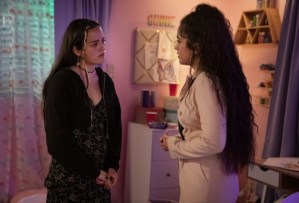 TVLINE | Let’s jump to Riley and Greta, who finally have the conversation we’ve been waiting for, though it is cut short before Riley can admit her hotel hookup with Luz. What might a potential Season 2 look like for these two?
ZELDA | We want to explore this idea of a couple in which one member is asexual. Greta is still learning how to talk about the fact that she’s asexual and learning what that means for her, and she doesn’t quite know what she wants yet. We want to dive into how Greta will handle this realization about her identity. As for Riley, she’s been experiencing a lot of mental health issues recently, and she’s also going through it. She needs to figure all of that out and get to know herself.
DANIEL | These characters have finally professed their love for each other, and they’ll now have to navigate what happens when one of them identifies as asexual. That’s a really fascinating and modern problem. It’s an interesting obstacle to explore in a love story. Then, the other piece of it is: Will Greta forgive Riley?

TVLINE| Fans were dying for these two to get it together, so the payoff was very rewarding!
DANIEL | I’m so glad. The finale was written before we even realized the response that that relationship was going to get. We’ve gotten some hilarious Twitter threats about what will happen if Riley and Greta don’t find some kind of connection at the end. So, we’re super glad that we went down this road! [Laughs]

TVLINE | I find Megan to be such a fascinating character. I’d like to rewind a bit to discuss her big karaoke scene. Why was Des’ree’s “You Gotta Be” chosen and were any other songs considered?
DANIEL | We latched on to that song really early. Even before we shot the pilot, we knew we wanted there to be a sequence in Hamburger Mary’s, and somehow that song came up in our writers room and it never went away. The lyrics are about family being together, and being brave and strong, and you see her looking out at her children and her husband, feeling the distance that’s developing between her family. It’s just so heartbreaking. We knew it had to be that song, we knew Martha [Plimpton] had to do it, and obviously she killed. I think it’s one of the most extraordinary bits of acting I’ve ever seen on a TV screen. (Read what Martha Plimpton had to say.)

TVLINE | Would you call it a breakthrough for her?
DANIEL | One thing we’ve talked about in our writers room and with Martha is that people don’t change overnight. We wanted to preserve that with Megan. She’s tricky. She says, believes and does some very hard things, and what we wanted to do was let her be that person, but also try to show her humanity and her feeling. That’s what Martha’s able to do in her performance that’s so compelling.
ZELDA | I think Megan has a long way to go. I definitely think there’s still a lot for her to learn and work through. I don’t think it was necessarily a “breakthrough” for her, but it was something, right?

TVLINE | Chester gets a surprise visit from a mysterious someone in the finale’s last moments. I’m sure you don’t want to spill those beans, but what lies ahead for our boy Chester?
DANIEL | Chester makes a lot of missteps and he’s definitely brokenhearted. At his core, he wants love desperately. I think we’d be remiss as storytellers if we didn’t try to give him that. I will say: Nobody knows who shows up on this rooftop except for Zelda and me… not our cast, not our crew. Some of the theories are really wild, and it’s exciting that people are passionately debating it. I have a feeling the fans will as well. It says a lot about what people want for Chester based on who they think should show up on that rooftop. Anybody is fair game!