One would hope that maybe, just maybe, Generation‘s Megan could learn to be a little more supportive of her bisexual son this Pride Month. But according to Martha Plimpton, her character still has “a way to go.”

“She doesn’t all of a sudden realize that being gay is fine and normal,” Plimpton tells TVLine. “It’s much more complicated than that.”

In Episode 13 of the HBO Max dramedy (now streaming), Megan reached her absolute edge as the super-conservative, uber-religious mother of three continued to struggle with Nathan’s bisexuality. After Nathan moves mother-son date night to a fundraiser supporting queer youth, Megan is pushed far outside her comfort zone as she’s forced to co-exist with gays, lesbians, drag queens and other members of the LGBTQIA+ community. That big night out culminates in a truly loaded, captivating karaoke performance that’s brimming with vulnerability, fear, love and every other emotion in the book.

Plimpton walked us through her character’s complicated relationships and morals, and breaks down how Des’ree’s “You Gotta Be” almost brought Megan to her knees.

TVLINE | Your character is… a lot! What was your first impression of Megan when you considered taking her on?
I didn’t read any scripts except for the pilot, initially, so I was working with two scenes and conversations with [co-creators] Daniel and Zelda [Barnz] about where she might go. I was incredibly intrigued. This isn’t a person that I identify with very well at all, but I thought the script was really good. I loved the way these kids were being written, and I felt like I could trust that Megan would be cared for the same way.

TVLINE | Why is Megan OK with having gay friends, but can’t wrap her head around having a bisexual son?
There are a lot of answers to that question! She knew Patrick before he came out and they were friends in college, soI think she can feel for him in the sense of “Hate the sin, not the sinner.” Her religion makes it very clear that she must accept and be loving and not turn her friend away, but at the same time, when it comes into her household, that’s where the line is. She is a very religious woman who thinks homosexuals are going to burn in Hell, quite literally, so her belief system is butting up against reality with her son. It’s like a clash of the titans. It’s confusing and it’s shattering the foundations of everything she believes in.

I think people like Megan can’t handle the mysteries of the world. They don’t like the uncertainty and chaotic nature of life at all, and they need something to make order out of things. Some people find science does it for them, and some people need religion. And in religion, there are definite rules for how things are supposed to be. Megan doesn’t like chaos. She’s also at an age where she feels [her kids] leaving the nest… and she’s scared! She’s really lonely and really scared. I think all of these things dovetail into one another in a way that makes it a perfect storm in her head.

TVLINE | Would you call her a bad person, or a villain?
No… Llook, she’s definitely an antagonist in the story. There’s no question about it. I don’t know if I see her as a villain. I have to find the space in my heart for her problems, for her struggles, for her fears. I empathize with her as an actor. I think if I met her in real life, I’d have very little patience for her. [Laughs] But this is my way of understanding people like Megan. She’s a unique human being. What I’m hoping is that people can dislike her or be repelled by her behavior, by what she says, but still feel for her, still care about her. Who knows if they do or not, but I would hope that that’s true.

TVLINE | In Episode 13, her husband Mark says, “You can’t steer the boat if you’re not in the boat.” Was that something she really needed to hear?
It certainly stops her in her tracks — he has a point — and it gets her to go to [the fundraiser at] Hamburger Mary’s. But he’s not saying relinquish control. He’s saying, “Get in there,” and when she’s there she says, “Well, know thy enemy!” It’s kicking and screaming. It’s another way of telling her she can control it, but only if she’s there. But of course she discovers that’s not the case. She can’t control anything. 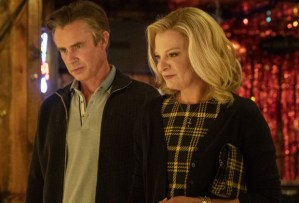 TVLINE | We have to talk about Megan’s karaoke performance of Des’ree’s “You Gotta Be.” What was it like preparing for that scene?
When the writing is really good, there’s not a whole ton of preparing one needs to do. You don’t have to white knuckle it so much, you can just let it happen and do it. That’s a funny scene for me. I’m still not entirely sure why she does it. She wants to show her son that she is brave and that she loves him, and she does it in this extremely bizarre way. She says, “Oh, are you daring me? OK. Fine. I’ll take that. I’ll do it.” I don’t know how smart it is of her. I think it’s a mysterious decision that she makes. It’s humiliating, it’s vulnerable, it’s scary, it’s weird and it’s loving, also. It’s a lot of things. She’s out of her element and she’s doing things that don’t make sense even to her.

TVLINE | Where does Megan go from here?
We’re going to see more of someone who’s really spiraling. She’s acting purely on instinct from here on out. She’s very stressed out and very scared. That’s what I like about this show; there’s no easy answer. It’s not wrapped up in a tidy bow. She doesn’t all of a sudden realize that being gay is fine and normal. It’s much more complicated than that, and she’s still got a way to go. She’s actually not even trying to come to terms with it, she’s grappling with it, she’s fighting it. That moment in the karaoke bar exists in this vacuum for her. She finds out some things in subsequent episodes that make her feel even more humiliated, alone and abandoned. She’s feeling a lot of that.

TVLINE | Will Nathan continue pushing his mom to her limits?
Well, you’ll have to watch! It’s not like Nathan comes to his mother and says, “Wow, you did that! That was really brave, Mom.” This isn’t that kind of show! He’s a teenager, and teenagers gonna teenage! [Laughs]

TVLINE | Any hopes for what you’d like to see for Megan in the future?
As far as story stuff goes, I leave that to the experts. Daniel, Zelda and our whole writing team are fantastic. I’m just looking forward to hopefully getting a second season, delving further into this crazy person’s world [Laughs] and discovering whatever there is to discover in her relationship with her husband Mark. Perhaps they’re going to have some challenges, and perhaps Mark is going to get frustrated with Megan and not know what to do. I love working with Sam Trammell. He’s just fantastic, so I’d love to explore more of that relationship as we go forward. And hopefully when we get a Season 2, we can. If we get a Season 2. Fingers crossed!

Want scoop on Generation, or for any other show? Email InsideLine@tvline.com and your question may be answered via Matt’s Inside Line.