David Makes Man fans who missed the younger version of the title character in the Season 2 premiere only had to wait a week for the narrative to focus on him again.

On Tuesday’s installment, titled “Hurston,” we got to see what life is like for Young David as a sophomore at Hurston Prep. It’s the very school the teenager fought so hard to get into as a graduating middle schooler. Now that he’s there, he’s made a group of friends (and this includes his roommate Luis) who seem to have his back, but turn out to be too privileged and myopic to relate.

The trouble begins when David’s calculator breaks and Luis loans him an old one. The loaner dies during a major geometry exam, and David is unable to complete all of the problems and ends up getting a failing grade. On one hand, you could argue that Luis helped him out the best that he could. But on the other hand, Luis is competitive and seems to revel in David’s inability to rise to the occasion for once. 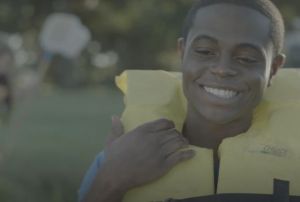 Later, Luis and the other guys decide to pull a class prank, and David helps them execute it flawlessly. But David also notices that one of the boys, Rondo, breaks out beer to celebrate, and he doesn’t feel comfortable partaking. Rondo’s dependency on alcohol rears its ugly head again when he strolls up drunk during breakfast and picks a fight with David, which ends with Rondo getting a slap on the wrist and David getting a week-long suspension from school. And the fight only escalates because Rondo, who is Latino, keeps using the N-word.

When David returns home to wait out his suspension, he learns the hard way that life has moved on without him. Not only has his mother Gloria gotten clean and sober, but she’s taking classes and fostering wayward kids. JG is also more mature and turns to David for advice regarding his newfound adolescent, um, tumescence. While David loves that he can help, he also can’t help but notice that his mom and younger brother don’t need him as much. If anything, it’s as though David, a budding Shakespearean, is more lonely than ever because he doesn’t fit in anywhere. 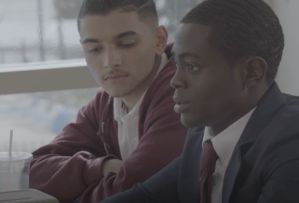 Hoping to get words of wisdom from his favorite middle-school teacher and mentor Dr. Woods-Trap, David emails her and is slightly heartbroken when she tells him that he has to control his anger. This is especially important, she reasons, because he is navigating in white spaces where systemic racism is woven into the school’s culture and will only work against him. She also cautions that his Hurston friends will either desert him or smile in his face and stab him in the back.

Dr. Woods-Trap’s words sadly come to fruition when Luis betrays him not once but twice. First, he doesn’t defend David against his racist Cuban father, and then when Rondo questions their heterosexuality, Luis turns on David and makes fun of him for not having a father. He even accuses David of looking for a handout, even though they’re both attending Hurston on scholarship. Wow. Will David ever make real friends like Seren again?

What did you think of David Makes Man Season 2, Episode 2, and do you think David will ever belong anywhere? Drop your thoughts in a comment below.