Stay ready so you don’t have to get ready. That’s the been the credo for David Makes Man‘s titular character since childhood.

But now that David is a man, the burden of staying ready and preparing for the worst has taken its toll. And that’s what fans learned when the beloved OWN drama returned for Season 2 on Tuesday with an opening installment titled “Barrel of Oranges.” Adult David works in strategic marketing and attempts to woo a client who is interested in buying and redeveloping the housing projects where David grew up.

Astute as ever, David appeals to the client because he knows that Mr. Padilla isn’t interested in just building another mall and entertainment complex such as the ones he’s built in the past. Instead, he wants to build mixed-income housing that will help him make a run for mayor. Things get complicated when David promises to secure the necessary permits in record time, a pledge that will undoubtedly add more stress to his already hectic life. It’s a lonely life filled with night sweats and interrupted sleep. 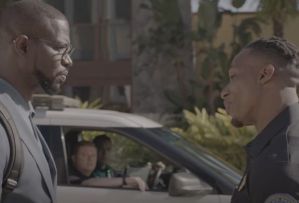 David’s problems only mount later in the episode when his younger brother JG, who is now a Miami police officer, attempts to break up a beatdown in his old neighborhood and is accidentally shot. The shooting sends an already mentally fragile David into a downward spiral that has him seeing visions of JG as a kid and breaking down in tears. However, the tears only come after David attempts to run from his worries.

First, he tries to sex his way out of it by hooking up with a woman he gets intimate with from time to time. Then he tries to work his way out it by focusing on his client Mr. Padilla and making more promises. In both instances, he fails to tell either person what’s going on with him and how his brother’s shooting scares him because even though they’re both adults now, he still feels like he has to protect and save JG all the time.

His breakdown at the end also thoughtfully ties together David’s dream at the start of the installment where he sees himself as a kid lying at the bottom of a pool full of water, drowning in his neuroses and sorrows. Can David get out of his own way and “find some calm,” as his mother Gloria suggests, or is he doomed to keep making mistakes until getting help is his only option? No matter what, the Season 2 journey for David Makes Man promises to make us cry and think along the way.

What did you think of the Season 2 premiere, and do you think David will be OK eventually? Give a grade in our poll, and drop a comment below.