Our time is up with Season 4 of In Treatment — but how are we feeling about where Brooke and her patients are now?

Sunday and Monday’s final episodes of the HBO psychological drama gave us one last session with each patient (Eladio, Colin and Laila) as well as one more slice of Brooke’s complicated personal life with sometime boyfriend Adam. Actually, all four were pretty complicated, in their own way. So let’s take a quick look at where each of them ended up, before you share your thoughts: 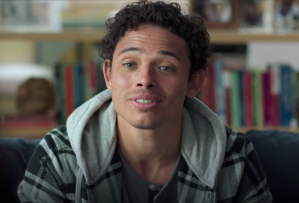 ELADIO | He has big news: He went to the psychiatrist Brooke recommended, and now he doesn’t think he’s bipolar after all. He may be obsessive-compulsive, with general anxiety and depression, but he can take drugs for that, and he wants to continue therapy: “I have you, and you’re the best.” She apologizes for losing her cool with him last week and observes that he’s at a crossroads. When she asks him what his vision for his life is, he says he wants to love someone and be loved, to reconnect with his family and set aside his old grudges. But “people like me don’t get what they want in life,” he adds. He repels the people he cares about, he believes: “I’m like a magnet that’s always turned the wrong way.”

Brooke responds by opening up about her own struggles: her alcoholism and her relationship issues. She may have a nice big house, but it’s empty. Plus, she admits that the transference he was experiencing came from her side, too. She was putting him in the role of the son she gave up: “It’s time for us to move on from that dynamic.” He insists that their relationship is “perfect” (hmmm), and when Brooke asks him to role play and explain their dynamic to a friend, he blurts out, “But I love you.” Uh-oh. “I don’t mind that you’re complicated,” he adds as Brooke excuses herself to the bathroom. He goes to the bathroom door and reveals that Jeremy won’t text him back. He feels like everyone ghosts him. Brooke stays silent and lays a sympathetic hand on the door as Eladio realizes: “You can’t show up for me, not in the way I deserve.” She finally opens the door and reassures him he can do this, giving him a referral to a new therapist — along with his cash back. 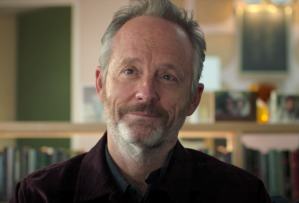 COLIN | Brooke tells him she signed off on his paperwork, but she wants to keep treating him. She also apologizes for speaking to him so freely when he came over last week… but he says he loved it. He’s still making excuses for his crimes, too. He thinks his investors just made a bad bet. He’s made bets on longshots before, too, and they paid off. He also admits when he was in college in the ’80s, he had sex with drunk girls: “It’s just what you did back then.” When Brooke points out that’s rape, he agrees… “by today’s terms.” If you twist things enough, he says, “we’re all guilty of something.” Plus, he smugly announces that he’s working with a new start-up, and they need a mental health expert for their wellness app. It could mean big money for Brooke. He thinks it’s destiny that they found each other: “It’s cosmic, Brooke.” And then… he tries to kiss her!

She pulls away quickly and makes it clear that is “one hundred percent off the table.” But he persists; he thinks if Adam didn’t show up that night, they would’ve slept together. She sits him down and tells him directly he’s experiencing erotic transference, and she’s done with his manipulation: “I’m not going to twist myself into knots to make this painless for you. I need you to hear the truth.” He lashes out, calling her “vindictive” and accusing her of punishing him for the sins of white men everywhere. He points out her own hypocrisy, sporting pricey earrings while kids starve in Africa, and she orders him out of her house: “I can’t help you. I need you to leave.” He scrambles, throwing a barrage of confessions at her in an attempt to get her back: “I’m god awful. I’m an entitled f–k.” She finally relents, telling him: “I’m just tired. I have so much work to do.” She thanks him for his honesty and says she’ll see him next week. (What??? Get a restraining order, Brooke!) 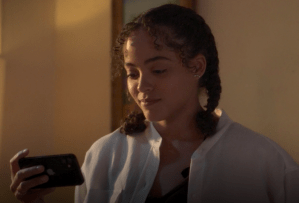 LAILA | Brooke gets a visitor at her door, but it’s not Laila; it’s her grandma Rhonda, looking for her. Laila has vanished, she says, and she wants answers from Brooke. Rhonda has been tracking Laila’s Uber rides, and the girl has taken a lot of trips to the overlook nearby. “Have you ever considered letting Laila go?” Brooke asks, and Rhonda scoffs at the very idea: “I can tell you’ve never been a mother.” (Ouch.) Rhonda frets that Laila won’t go to college and take advantage of all the sacrifices she made for her: “She deserves everything I never had.” She says Laila and Cara broke up a while ago, and when Brooke sees an Instagram from Laila at the overlook with a caption that translates to “Hail and farewell,” she gets concerned. She thinks they should contact emergency services.

She makes Rhonda some tea to calm her nerves, but Rhonda attacks her instead: “You were supposed to help her.” Her anger builds as she defends her son’s parenting and laments how she put all of her dreams into her kids for nothing. “It’s always so much easier to be mad than scared,” Brooke observes. Then her phone rings: It’s Laila. Rhonda tries to snatch the phone away, but Brooke holds onto it. Laila assures her she’s fine; she went to Lima by herself, and she’s staying there. She doesn’t want to call her grandma, even to say she’s OK. She was just saying goodbye to L.A. with that Instagram post, and she took inspiration from her mom: “Maybe she’s a little like my hero.” She and Brooke say goodbye, and Brooke tells a sobbing Rhonda that Laila is OK. Rhonda demands to know where she is, but Brooke can see she’s just frightened. Rhonda’s phone rings, and she turns to Brooke: “What do I do?” “You listen,” Brooke quietly tells her. 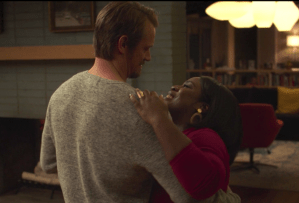 BROOKE | She rehearses what she wants to say to her son with Adam; she’s been through a few drafts, and she’s nervous. Adam tries to get her to relax, but there’s some unaddressed tension there. When she mentions she’s proud of Laila, Adam laughs: “From one girl who’s always leaving to another.” (Brooke wasn’t drinking until that point, but now she takes a sip of wine.) They slow-dance to Boyz II Men and reminisce about meeting as teenagers. She moved away, though, and after she sings a song from her mom’s funeral, he says she looks sad. But the real breaking point comes when he jokes that he hopes her son doesn’t “inherit all the doom and gloom.” She takes that hard.

She fires back at Adam for his laziness and f–boy tendencies, and takes a jab at his smarts while she’s at it. “I am willing to have real feelings,” she says, but he points out she’s drinking away her pain. She tries to go to bed, but he won’t let her leave him again. He gets her out of bed, and the fight continues, with her letting it slip that she took the morning-after pill: “Who deserves us as parents?” Now he’s hurt, and he reveals how he keeps hoping she won’t ditch him this time. “We love each other,” he insists, and they share a deep, intimate hug before making love. While Adam sleeps, Brooke packs a bag and then sits outside watching the sun rise, with her speech to her son written on index cards in her lap. She picks up her phone and dials Rita’s number, telling her: “I’m ready.”

That’s all the time we have… but which Season 4 storyline worked best for you? Vote for your favorite in our poll, and then hit the comments with your post-finale thoughts. (And would you watch another season with Brooke?)