We’re willing to bet that you had just about anyone other than Laverne on your “Who Shot Douda?” short list. And we wouldn’t blame you: Jason’s grieving mother hasn’t been seen on The Chi since the Season 3 premiere. In fact, showrunner Justin Hillian says the character’s long absence is one of the biggest reasons that the writers of the Showtime series chose her as the catalyst of Douda’s downfall.

“We went through a lot of scenarios, and ultimately, it just came down to: What’s the most emotional, and the thing that could really push Douda’s character forward?,” Hillian says. “There were other things that maybe felt splashy, or with people that are more germane for this particular season, but it was like, what’s really motivated and will make a ton of sense? What’s surprising, but also gives Douda a lot to think about moving forward?”

The attempted murder also answers a lingering question from last season: Who killed Brandon? As Mayor Perry confesses to his wife after he regains consciousness, he was behind the young man’s death. “I had to,” he reasons, explaining that Brandon had started talking to federal law enforcement officials, and Douda couldn’t risk that exposure.

When the show’s Powers That Be first told Curtiss Cook that his character was going to take a bullet — and after reassuring him that the wound wouldn’t be fatal — “I was like, ‘Oh, who’s it going to be? I’m thinking, maybe it’s Reg. You know what I mean? Maybe it’s Brandon,” he tells TVLine. “I thought all that stuff and then they say ‘Laverne,’ and I don’t know why, but I got these chills.”

He continues, “The fact that she comes back and takes revenge because all of her children were taken by that city. That she’s getting revenge on one of the people responsible for a lot of the death of those young Black boys in Chicago, Mayor Douda, because he runs that organization.” Cook pauses for a moment. “I was like, ‘God, that was perfect. Nobody’s going to see that coming!'” 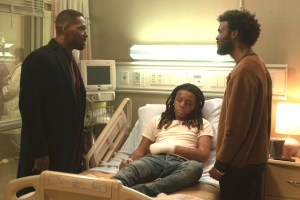 As the season progresses, Hillian said, look for the shooting to cause Douda to be a little more introspective, perhaps, than we’ve seen in the past. “He isn’t a good guy by any means, but he’s doing better and doing some of the right things,” the EP notes. “It’s that moment of: You’ve hurt a lot of people, so, are you going to change? Or are you going to lean back into the guy that got you there. We really wanted to put him in those crossroads.”

He adds: “Also, just answering that initial question from the first episode: gangster or mayor? Until he picks one side or the other, he’s going to have trouble.”

* Papa tried to bring Kevin, Jake and Jemma together for a time of healing (on his podcast), but the whole thing blew up. And later, after he couldn’t stand by and let Maisha have the spotlight when a magazine wanted to interview her, she told him she needed some space.

* When Kevin and Jake got into a fistfight in class, and Kevin accidentally punched the teacher who tried to break it up, Kev was kicked out of school.

* After she saw Dre and Jada together from afar, Nina was convinced her wife was cheating on her. So she went home with a woman who hit on her, and they had sex. When she got back to her place, Dre tearfully admitted that Jada was sick. Oops!

* Kiesha went on a date with her co-worker, who seemed very respectful of the aftermath of her trauma. On an unrelated note, at the end of the hour, Kiesha informed Nina that she wants her son back.

What did you think of the revelation of Douda’s shooter? Hit the comments and let us know!