Going into “A Is For Angel,” we knew that David’s lady died a while ago, and that his first vision happened around the time of that tragic event. And in Sunday’s hour, another small revelation took place when Leland insisted on going through a confession-like exercise with his spiritual adviser, David.

The men sat back-to-back at the parish — to simulate the anonymity of a confessional — as Leland took malicious glee in relating details about his involvement in Julia’s final days. He recalled how he insinuated himself in Julia’s life and essentially stalked her. When she got very sick and needed around-the-clock care, she worried that she was a burden on her loved ones — and Leland assured her that she “absolutely was a burden.” He encouraged her to “free the ones she loved of her presence,” and then she was gone.

David was clearly upset by the end of Leland’s speech. And after Leland left, we saw that the tearful priest-in-training had clutched his rosary so hard that it had made his palm bleed. (Incidentally, that was the moment that Sister Andrea, a nun played by Great News‘ Andrea Martin, agreed to help David fend off the forces of evil.)

Was Leland lying? Did Julia kill herself? In separate interviews, we took these questions to series star Mike Colter and showrunners Robert and Michelle King. 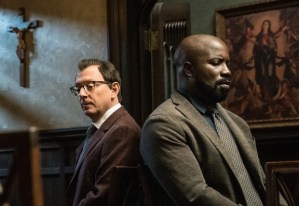 TVLINE | I was intrigued by the Julia reveal. What I understand is Julia was ill, and then perhaps started thinking that maybe she should take herself out of the equation in terms of being a burden to the people she loves.
ROBERT KING | That illness by the way, that illness came from addiction. That illness was just not health, but it was addiction that she could not conquer.

TVLINE | Will we learn more about that season?
ROBERT KING | It’s a marathon, not a sprint, on the Julia question. We’re dropping seeds.

TVLINE | There’s still a question mark about what happened to Julia, though the Leland confession scene highlights how deeply David is affected by what happened to her. What can you tease about what we’ll learn about that backstory as the season progresses?
MIKE COLTER | This season’s so long, and now that I’ve filmed it, I feel like I’ve forgotten half the season of what we did. [Laughs] At some point, we do get more information, and I think what you alluded to is correct. I think there’s a part of David’s past that obviously only Leland has access to, and that he uses it to push buttons, and to get David going…

Who knows how she met her demise? It could go a number of ways, but there’s so many really awful things that people can do to people, that make you wonder how we coexist or how we can be so awful as a species. 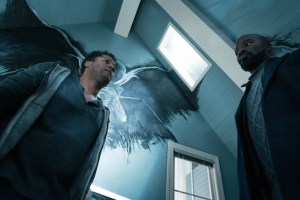 * The case of the week involved a man who believed that the archangel Michael was compelling him to do God’s work (but in a creepy, disturbing way). The angel later appeared to David, as well, and he spoke cryptically about “God’s penance… a weapon more powerful than 10,000 swords. Half the world will be dead.” When David came to, he noticed that a news broadcast was covering a mystery illness it deemed “the next plague.” (The man’s wife, by the way, eventually turned into a pillar of salt.) 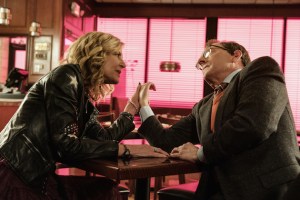 * Leland’s exorcism was delayed by a month, and his anger over the postponement led him to break up with Sheryl in the middle of a wedding-planning session. “I want you to take your dried-up little ovaries and drag them back under the rock you came from,” he said, explaining that he was only dating her to hurt Kristen, and he’d done so, so their relationship was over. But when he realized that Kristen & Co. had gotten into his map hidey-hole, he threatened Sheryl not to say anything to her daughter about what they’d done. (She was unimpressed, manhandling him and pointing out that he’s got more skeletons in his closet than she does. “Do you know how many demons I dated before you?,” she mused.) Then she painted “DIE YOU STUPID PIG F—K” in blood on his office wall and rebuffed his efforts to get back together later in the episode. (P.S. I love Sheryl.)

* A new cop, Anya (played by Broadway’s Jessie Mueller), is working Orson LeRoux’s murder case, and she asked Kristen for some help with some background information. Kristen agreed, but she was uneasy. Later, Kristen and David got into a discussion about whether or not wars can be just. He argued that they can, because “there’s evil in the world, and it should be confronted.” Using that logic, she wondered, can there be “just murder” if it stops a greater wrong? David said that’s the only way to stop a killer… but any other killing is just murder. As he wondered why she was asking, she flashed back to LeRoux crawling away from her on the night of his death.

Now it’s your turn. What did you think of the episode? And what are your theories on Julia’s demise? Sound off in the comments below!