The fate of Bosch the series is sealed, while the future for Bosch the man appears headed in a new-ish direction.

The back half of Season 7 as a whole shifted the professional paths of several characters. Billets’ investigation into some slimeball officers who were targeting/harassing her wound up paying off, bringing down Captain Cooper as well. In the aftermath, Irving — who had blackmailed the mayor into extending his tenure as chief by another five years — invited Billets to succeed Cooper, and not just on an “acting captain” basis.

Meanwhile, Maddie — prompted to re-examine her own life in the wake of Honey’s near-fatal shooting and herself then being targeted by a hitman — decided to not just move out of her father’s place and in with boyfriend Antonio, but also to apply to the LAPD. Harry’s reaction to that news was… well, “caught off-guard,” but ultimately approving.

Ahead of the series finale’s final act, Billets shook things up in her own way, by posting the hotly anticipated transfers caused by the Hollywood division’s imminent shutdown. Pierce was saddled with the “graveyard”/”late show” shift (and all the ribbing that comes with it), while Vega was partnered with Bosch, leaving J. Edgar to score a plum, and frankly unexpected, RHD gig. Jerry asked Bosch about how that came to be, but his partner claimed he had no such say — though a few scenes earlier, we saw him stop by Billets’ office to offer “a suggestion” about the assignments….

Bosch’s own assignment, and maybe he was pragmatic to know this, would prove totally moot. He was as determined as ever to have Peña arrested for ordering the arson fire that killed 10-year-old Sonia and several others, and to that end he leaned on CIT agent Luke Goshen to get the where and when of the meet-up to which Peña would wear a wire. Jerry noticed that Bosch was still chasing Peña, even though the feds had firmly warned the LAPD to steer clear of it, and offered backup. So with the location and time obtained from Goshen, the two used a nondescript Cherokee to scout out the El Chole meet-up spot. Harry then slipped inside the restaurant as Jerry in the Jeep distracted the henchman who was minding the side entrance. Minutes later, when Jerry texted that Peña himself was heading inside, Bosch got the drop on Peña and whisked him away from the meet-up and out a side door, where Jerry drove up and scooped them up.

While the highly confused FBI hailed and raised Hell with Chief Irving, Jerry raced Bosch and Peña to the station. There, Bosch quickly booked Peña for the multiple arson murders, while also making sure that Times reporter Scott Anderson got the scoop on the feds’ plan to let Peña skate/head into WITSEC, and how Chief Irving himself benefitted from the deal.

As expected, Irving upon arriving at the station chewed out Harry, suspended him, and indeed readied Peña to be released back into FBI custody. But while Peña was standing outside the cop shop waiting for his ride, Sonia Hernandez’s father, Hector, sauntered up to him, pistol in hand, and shot the criminal. Inside the LAPD, Bosch and others heard a series of gunshots, then dashed outside to find both Peña and Hector felled by bullets, the latter shot by patrolmen. With his final breaths, Hector told Harry, “Por Sonia.” 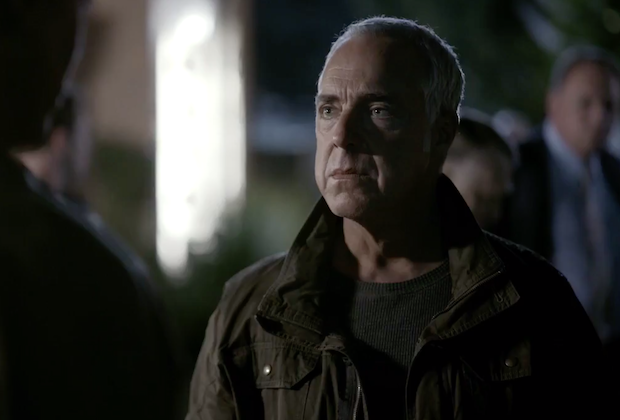 Incensed by the needless bloodshed, Bosch stomped toward Irving and assured the chief, “This is all on you!

“This too,” he added, handing the chief his badge. “Take it. Keep it.” Irving scoffed, “Bosch, who are you if you don’t have a badge…?” To which Harry said, “I’m gonna find out,” before skulking off into the distance. 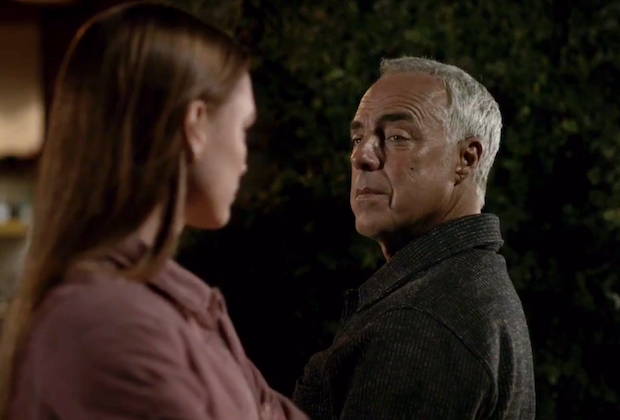 Later that night, Maddie showed up at her father’s house to ask about what happened: “What are you going to do?”

“With my life, you mean?” he responded. “Something’ll come up.”

And in a coda set some time later — the COVID pandemic was imminent based on a previous scene, but no masks or anything were on hand for the epilogue —  we see Harry filing his application for a private investigator’s license, assuring the clerk that, yes, he has “6,000 hours in investigative work” under his belt. Though Harry was a bit amused to hear that his application is pending a background check by… the FBI.

So, it looks like IMDb TV’s as-yet-untitled Bosch spinoff starring Titus Welliver, Madison Lintz and Mimi Rogers will follow Harry as a P.I. —  that much seems certain. Presumably he will work, at times, for Honey Chandler, while Maddie embarks on her career with the LAPD. (Surely her “I want to help” comment at the end didn’t mean she was going to bail on the LAPD to assist her dad?)

What did you think of the farewell season, and where the spinoff might be headed?