Actress Lauren Lee Smith is ready to shake things up after four seasons of starring as the title character in Frankie Drake Mysteries.

So when she got offered the lead in Lifetime’s made-for-TV movie Doomsday Mom: The Lori Vallow Story, premiering Saturday at 8/7c, Smith recognized it as the challenging turn she’d been seeking. “I wanted something that would excite me and spark something in me that I hadn’t experienced before,” the Vancouver, B.C. native tells TVLine of the role that director Bradley Walsh pitched her.

“I took a deep dive into the whole story, and I found it morbidly fascinating,” she adds. “I found the character so surreal and hard to understand, and the idea of trying to figure out how this woman came to do what she had done intrigued me. That, and coming up with our own interpretation of how she got to where she got, was a really interesting challenge.”

Last month, prosecutors in Idaho charged the real-life Vallow and her husband, end-times author Chad Daybell, with the murder of her two children: Tylee Ryan, 16, and Joshua “JJ” Vallow, 7. The 2019 disappearance of the two minors grabbed national headlines, and authorities found their remains in Daybell’s backyard a year later.

Doomsday Mom: The Lori Vallow Story attempts to fill in the blanks before and after the children vanished by tracking Vallow and Daybell’s whirlwind affair, while they were both still married to other people. The two met after Vallow read one of his books and became a fan. Vallow’s brother would later kill her estranged husband in self-defense, he claimed, and Daybell’s wife died from what was believed to have been natural causes at the time. But her death is now being investigated as a possible homicide. 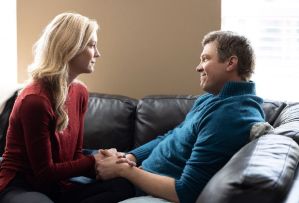 Before Vallow met Daybell, many described her as a loving and devoted mother whom Daybell brainwashed. Smith says that element of the story piqued her interest as well.

“It was almost a double life where everyone kept saying they couldn’t believe she’d do something like this,” divulges Smith, who watched hours of police and news footage of Vallow before shooting began and mirrored her mannerisms and expressions. Smith even got hair extensions. “How does an all-American wife, mother, friend and family member turn into this?”

To keep things light between takes, Smith says she, along with Buffy the Vampire Slayer and Underground vet Marc Blucas, and the rest of the cast and crew checked in on one another and added levity when and where they could.

“We all knew what we were getting into,” Smith says. “And we knew how dark and heavy the material was. Marc, who plays Chad, and I tried to get the heavy conversations about the characters out of the way before we started shooting. When it came time to shoot, we had to just do it, let it go at the end of the day and move on with our lives.” 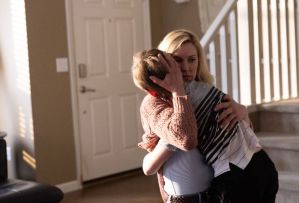 There were times, Smith admits, that she couldn’t let go. “It’s heartbreaking what happened to her kids,” she adds with a sigh. “It was hard when I had scenes with the young actors. It wasn’t scripted to be emotional, and I especially wanted to strip away the emotion because that is what makes Lori so haunting.”

“But it was really hard for me, and there was a scene when Lori takes JJ [played by Aias Dalman] into her arms, and I was a complete and weepy mess when the coverage was on him,” Smith recalls. “When the camera was on me, I had to hold it together. When it was on him, I was bawling my eyes out because I find it so disturbing and hard to watch. As a mom, I can’t understand.”

As for future projects, Smith says she’d love to reunite with the cast of CSI for the reboot/revival CBS is planning. She costarred as Warrick Brown’s replacement, Riley Adams, in Season 9. “I would totally go back to CSI if they asked me,” Smith says. “I had a fantastic experience, and I feel so fortunate to have done that and to have been a part of such an amazing show. You never know, right?”

What Smith does know is that true-crime aficionados will appreciate the story Doomsday Mom: The Lori Vallow Story tries to tell. “People know the headlines,” Smith surmises. “Our interpretation examines what happened in between the timelines of all of those horrific things. Hopefully, that will interest people when they watch it.”