Here’s some food for thought: History Channel has one of the oddest, most interesting docuseries around right now, and you’re going to want to add it to your TV-watching menu this weekend.

The show: The Food That Built America. The premise: a spotlight on the “unbelievable true stories behind the brands you love,” per its official logline, foods as specific as Oreos and Cheetos and as generic as the hot dog. The experience: A fun, educational and slightly ridiculous hour of TV that looks like Drunk History and sounds like [insert horrifying true-crime documentary here].

Admittedly, I am late to the picnic. The Food That Built America has been around since 2019  —its Season 2 finale airs Sunday at 9/8c — which means that I have been playing catch-up this spring and summer. But what delicious homework! Each episode goes deep in a certain area of American noshing; past subjects include Campbell’s Soup, Swanson’s frozen dinners, Kraft Singles and Pizza Hut. And what I love most is the reverence and seriousness with which everyone — from the music supervisor to the actors in the historical re-enactments to the talking heads — attends to the subject matter at hand.

Take, for instance, in the “Gum Slingers” episode, which aired last week and which chronicled William Wrigley’s domination of the chewing-gun business. A food historian offering commentary on the story says, with no irony I can discern, “He was a little guy who pushed his way into becoming one of the chewing-gum kings.” Or the gravity, in the the McDonalds-vs.-Burger King episode, with which two actors consider a french fry (see right). Or the way that narrator Campbell Scott absolutely 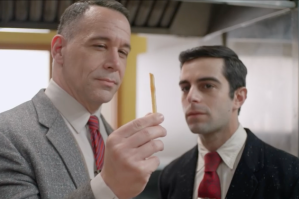 freaking sells this intro to the Oreo installment, which reads in part: “Two ambitious brothers join with one ruthless entrepreneur to launch cookies and crackers into the mainstream… until betrayal tears them apart. Their bitter competition sparks some of the biggest innovations in American food, revolutionizing packaged goods, and one final stab in the back gives rise to the most popular cookie ever made.” The Emmy nominating window is still open, right?

Wait, I haven’t yet conveyed to you how low-budget yet earnest the historical reenactment segments are, which gives them a decidedly community theater vibe. (Think Drunk History without the snark.) In the episode about Nathan’s Hot Dogs, I was 80 percent sucked into the story of how Nathan Handwerker turned his Coney Island stand into a national name, and 20 percent distracted by thinking I was sure I’d see that one of the actors in the flashback to the early 1900s would’ve forgotten to take off his or her Apple Watch before shooting. And that just made the viewing experience more fun!

Most impressively, I learn something every. damn. time. that I tune in to The Food That Built America. Crackers were sold in disgusting barrels a century ago! Nathan’s hired doctors to come hang around the hot-dog stand to make people think it was a healthy, nutritious meal choice! The process by which Kraft was able to make shelf-stable cheese was really rather gross!

The season-ender this weekend is all about “breakfast barons” like Will Kellogg, who developed a 5-mile-long conveyor belt to facilitate the production of his cereals. “Five… miles of cereal.” I can almost hear Scott intoning it now. Who knows what I’ll discover about the lowly cornflake? I can’t wait to find out.