Sarah Shahi (Person of Interest, Chicago Fire) stars as Billie, a wife and mother who, after growing tired of her dull suburban life, begins journaling and fantasizing about her past sexual exploits with hunky ex-boyfriend Brad (Adam Demos). Her whole life is blown up when her husband Cooper (Mike Vogel) reads those steamy entries, which then kickstarts a complicated love triangle after her ex finds his way back into her life.

Sarah Shahi, who bares all both physically and emotionally in those eight episodes, admits that she was nervous to step into such a demanding role.

“It’s a very emotionally charged role,” she tells TVLine. “I was a ball of nerves, honestly, between that and the amount of nude scenes and sex scenes, and the raw emotional breakdown scenes. I was a God-fearing girl when we were doing this. I was praying a lot.”

It helped that Shahi was surrounded by women like creator Stacy Rukeyser (UnREAL, Greek), who employed a crew of only women directors to bring those explicit scenes to life under the female gaze. Plus, four out of the six writers on the show (which includes Rukeyser) were women. Shahi also worked with intimacy coordinator Casey Hudecki, whose credits include The Handmaid’s Tale, American Gods, Ginny & Georgia and Tiny Pretty Things. 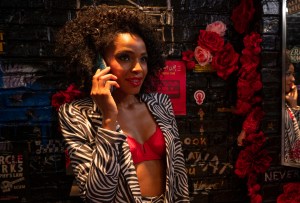 “To have women behind the camera, and something that was this centered around a woman’s point of view, I don’t think I realized how great that was until after the fact, the safety that comes with being able to talk to women about those sexual scenes. I don’t know if I would have been that comfortable opening up in that way if it was a man,” Shahi explains. “A lot of times, when we have shows or movies that are very sexual, it’s still told through the male lens, but now we have something that’s the female point of view.”

In Sex/Life, the camera often lingers on her male co-leads’ bodies longer than her own, which Shahi found refreshing. “It’s about time,” she says. “Also, it was important to depict that women can get off in other positions.”

Margaret Odette, who plays Billie’s best friend Sasha, reveals that she also felt a strong sense of safety and comfort while making the series.

“After I booked the role, Stacy [Rukeyser] was like, ‘I am a white girl from Connecticut. I will not begin to pretend I know what it’s like to walk around on this planet as a Black person, but I want to be a partner in making sure that this character Sasha comes across authentically and full and complex in all the multitudes that most women possess,'” she shares. “I’m so grateful that she extended the invitation to being an equal collaborator in that way, because it set the tone for my entire experience working on the project.”

Odette notes that the on-set collaboration was “echoed by every department” including costuming, who worked with her to ensure that Sasha only wore clothing from Black designers. “Everyone was just so giving of themselves… in how they worked with the actors,” she adds. “It really felt like we were all in this together. We were a team.”