Elizabeth Keen’s name was crossed off The Blacklist on Wednesday night — and it appeared to be done in permanent marker.

Just over a week after news of Megan Boone’s imminent exit from the show broke, the NBC drama wrote out her character by killing her via a gunshot in the back. (Read Boone’s farewell to the series here.)

The premise of Wednesday’s Season 8 finale was simple: Red promised to give Liz a letter her mother had left for her, which contained all of the long-awaited answers about Red’s identity and why he came into her life. But before she could obtain the letter, Liz had to kill Red.

With Neville Townsend recently eliminated, Red was certain that numerous other criminals would soon descend, all jockeying for control of Townsend’s empire. And since Townsend learned Red’s real identity before his demise, his potential successors all likely had that information, as well, which would put both Red and Liz in danger once again. The solution, as Red saw it, was for Liz to murder Red — cementing herself as a criminal not to be messed with — and inherit The Blacklist from him, which would give her necessary protection against any approaching enemies. Plus, Red’s mysterious illness, which hadn’t been mentioned in quite some time, is apparently terminal, and Red seemed to welcome the idea of finally surrendering to it. 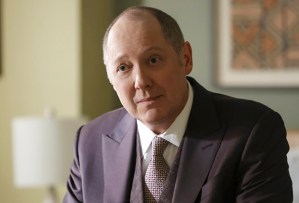 After much internal debate (and a serendipitous run-in with a young woman whose life she saved back in the pilot episode), Liz agreed to Red’s proposal, and the plan was set: Liz would shoot Red in the street that night, shortly after he left a private party at Pascual’s restaurant. But when it came time to murder Red that evening, Liz aimed her gun at him, but couldn’t bring herself to pull the trigger. “I don’t want to,” she said, tears in her eyes. “I understand,” Red replied. But before Liz could do anything else, she was shot in the back by Townsend’s right-hand man, Vandyke. (Long hair. Beard. You know the guy. And Red immediately shot him multiple times in retaliation.)

As Liz collapsed to the ground, she saw her life flash before her eyes — bittersweet memories of Tom, Agnes, Dembe, Aram, Cooper and Ressler that doubled as a tribute to Boone’s years on the show. And when Red returned to Liz after killing Vandyke, Liz looked at him with a curious expression as memories of both Red and her mother, Katarina Rostova, played out in her mind, almost as though she was understanding Red’s real identity in that moment. And as Liz died, a flashback of Katarina kissing Baby Liz on the forehead when she was born was immediately juxtaposed with Red kissing her head in the present day on that street corner.

As is The Blacklist‘s way, it was never explicitly announced that Red is indeed Katarina. But Liz’s combined memories of Red and Katarina seemed to indicate as much, along with other hints Red dropped throughout the finale. “You knew her well?” Liz asked Red at one point, referencing Katarina. “Better than anyone,” he replied. And later, when Liz asked why she couldn’t know Red’s identity until he was dead, he told her, “Because if you knew beforehand, you’d never agree to kill me.” At this point, would it even make sense for Red to be anyone else?

Shortly after Liz’s death, Dembe pulled Red away from the scene and they fled on foot, just moments before Ressler, Cooper, Aram and Park arrived. Though they’d hoped to catch Red and Liz in time to intercept their murder plan, they instead found Liz lying on the street, with Red’s fedora tucked under her head.

OK, Blacklist fans, it’s your turn. What did you think of Boone’s final episode? And what do you make of Red’s possible identity? Cast your vote in our poll below, then drop a comment with your full reactions!