At the exact moment This Is Us fans had their minds blown by the unexpected flash-forward at the end of Season 5, series star Susan Kelechi Watson was taking a little social media break. “I stayed off of Twitter for it,” she says, laughing, as she recalls the fervor over the revelation that Kate and Toby would divorce at some point in the future. “I just kind of let it mellow and settle before I checked in.”

And now that the initial shock has faded? “It’s a fun place to,” she begins, then backs up a bit. “Well, not ‘fun.’ Scratch ‘fun.’ But it’s an interesting place to go next year, to see how Kate ended up getting ready to marry someone else, and what had happened between her and Toby.” And before we can ask, Watson makes it clear that she’s not privy to what will happen next in the time jump set at Kate’s wedding to Philip: “I mean, I’m ready to see it,” she says. “I’m on the edge of my seat!”

This Is Us won’t return for it sixth and final season until 2022, but Watson has plenty to keep her busy until production begins again later this summer. First up: playing Madam Nkechi Ford in the Public Theater’s Shakespeare in the Park production of Merry Wives, a Merry Wives of Windsor adaptation set in South Harlem community of West African immigrants.

TVLine recently chatted with Watson about This Is Us‘ upcoming swan song, her return to live theater (and the post-pandemic return of live theater) and the pride she feels in HBO’s Between the World and Me special, which she executive-produced and appeared in.

TVLINE | We’re definitely going to talk about This Is Us and Between the World and Me, but I’m too excited about the return of live theater, so let’s discuss Shakespeare in the Park.
I am so excited for live theater, Kim! I am just over the moon because I was really concerned about the theater community. Coming from the theater community, I know what it is to, first of all, just be in a position where [you’re] not booking and maybe not getting enough weeks for like health insurance, and all those kinds of everyday actor stuff. But to really have it completely taken away, I was so concerned. It’s such a vibrant part of the community, especially in New York, to have it not around and not know when it was coming back was just crazy. Because you know the theater motto is “The show must go on,” right? So it’s crazy when it doesn’t, because it takes a lot for a show not to go on. A pandemic, I guess, yeah that’ll do it. [Laughs] But yeah it was really tough and really heartbreaking to see that. [Now], I’m in a room with some very excited artists, including myself, so it’s really been great.

This Is Us' Kate's Wedding Flash-Forward: Your Frame-By-Frame Guide to Every Clue

TVLINE | Have you started Merry Wives rehearsals yet?
Yeah, we started two-and-a-half weeks ago now. Saheem Ali is directing, he’s the associate artistic director at the Public [Theater], and Jocelyn Bioh is a very talented playwright and writer, and she’s done the adaptation for us. She’s from New York City, lives in Harlem, so it’s all very close to home. We have a lot of people from the African diaspora in it. And it’s been a really fun time because it’s a comedy, so we’re just coming up with like crazy comedic stuff all the time and making each other laugh all the time.

But we’re also very aware that we’re coming out of a pandemic. We’re very aware our bodies feel different our voices feel different. They haven’t been used in this way in 15 months. And we’re also just really aware of the blessing that it is to be in this room right now. We’re still very COVID safe. We test three times a week. It’s a lot like the same testing schedule as This is Us… The vibe is amazing. Everybody is so great, and it’s a lot of love in the room, so we’re having a good time. 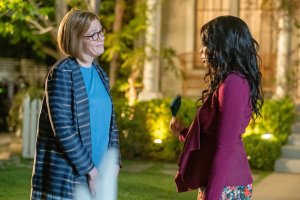 TVLINE | At the end of the season, Beth’s dream of having a dance studio has died, but we know that she and Randall both have a lot of professional growth coming up in the future. But at the end of Season 5/start of Season 6, tell me where she’s at, emotionally, after this big loss.
Well, I think that Rebecca really helped her out with her confidence be somebody who changes the system, who makes dance feel more inclusive and doesn’t ride along with any kind of discrimination or to make people feel like they can’t be a part of it because of how their body is shaped or because of their background. It sounds to me like she gave her the confidence to say, “Hey, if you don’t like this about this whole system, you need to do something to change it. And not just say ‘I don’t want to be a part of this,’ but you should be the agent of change.” So, it sounds like that’s the path that she’s going to go in. Rebecca gave her some really good advice.

TVLINE | Where was Beth’s dance school when I was a portly 6 year old?!
I’m telling you, it’s so true! It’s part of the reason why I never felt completely accepted as a ballerina. I felt very outside of it, because I was made to feel like I didn’t have the body for it. 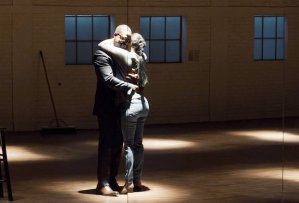 TVLINE | Randall has come to terms with, or at least started to explore, so many of the things that have weighed heavy on his heart for the entire run of the series. It seems like Randall and Beth, accordingly, are set up for some good relationship stuff in the coming season, maybe having them on more even emotional footage?
Randall is also understanding the type of support he needs to be for Beth. Like in the scene when my dance studio is foreclosing, and to just be there for me in the way that I need. It’s beautiful, because they’ve been married for at least 13 years, and it’s a beautiful thing to see that they’re still learning. They’re still learning how to navigate their relationship, navigate each other, how to be there for each other in a healthy way and a way that allows the other person to thrive. And they’re still learning to see each other and all parts of each other. I feel like that’s a relationship goal for me. 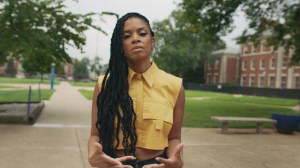 TVLINE | Now let’s talk about Between the World and Me, which was quite the project to pull off in a pandemic.
[Laughs] Yeah.

TVLINE | Was it tough to get people onboard?
It felt like the perfect time, because Ta-Nehisi’s book said everything that everyone who worked on the project wanted to say in that moment. We realize it had already been said six years ago, when Ta-Nehisi was talking about Mike Brown, you know? It had already been said in such a beautiful, poetic way. And after Ahmaud Arbery and after Brianna Taylor and after George Floyd, that this felt like the script to our inner thoughts. It felt like the script to what was on our hearts. And so, it just made sense to give that a larger audience, so that we can continue the conversation.

TVLINE | What were some of the reactions you got when it aired?
We got a lot of pictures of people watching with their kids, kids wanting to watch and being engaged. A lot of stories about people who felt like this was what they needed right now. It was everything they were feeling, and it did it in a way that didn’t trigger more negative emotion. It did it in a way where you felt like you could deal with it and begin to find a way through it, which was one of our major goals and I know especially one of Kamilah [Forbes]’ major goals as a director, was not to retraumatize, you know?

…We’re so extremely proud of it. And you know it was, I think, probably going to be one of the easiest asks I’ll ever see in my career. [Laughs] Those people were so, so eager to be a part of it in a way that, you know, really we were so grateful for. When we asked most everyone we asked unless that had a conflict said yes… It just felt like a community thing, and it brought some healing to us and those that we worked with.