Continuing to keep the insanity at what might just be an all-time high, even for The Haves and the Have Nots, Tuesday’s episode of Tyler Perry’s bonkers OWN soap landed Madison in an extremely compromising position, made fast friends of a couple of lowlifes and revealed after all this time that Amanda was killed by…

On second thought, keep reading. We’ll get to the big reveal when we get to it. For now, let’s start at the beginning, which was actually the ending of “Black Panther” (recapped in full here). After Benny beat the living daylights out of Sandy and his “little weasel ass,” Rianna was mortified. No matter how many times her date insisted that he could handle the Malones, she remained convinced that he was as good as dead. “I’m sorry for you,” she said. “I really am.” 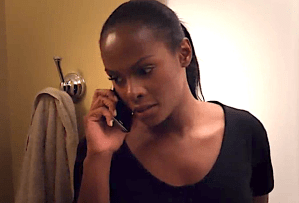 ‘WHAT THE HELL’D YOU GET YOURSELF INTO NOW?’ | Back at the motel, Candace received a surprise call from Conley, who said that he was coming to Savannah to discuss how much Charles loves her. She was all, “You can come to Savannah all you want, but you won’t be talking me, Senator Total Stranger.” Still, he remained undeterred. Just as Candace and Mitch were finally going to leave for dinner, he decided to return Sandy’s call(s), at which point he learned that “weasel ass” had gotten into a fight with Rianna’s new boyfriend, Benny, and now he intended to kill “that Black kid.” Oh, and Sandy was also going to tattle on Mitch to Uncle Vinny. Honestly, it’s a wonder Sandy doesn’t get beaten up every week!

Just as Mitch was about to race off to meet Sandy at the hospital, in came Benny, on whom it finally dawned that he might have just put himself and Candace in real danger from the Malones. At the hospital, Sandy “endeared” himself to Madison by muttering one threat to commit a hate crime after another while the nurse was stitching up his face. When Mitch arrived, Sandy made me glad all over again that I hadn’t decided to make a drinking game of taking a swig every time he said, “I’m gonna kill that son of a bitch” about Benny. Ah, but Sandy couldn’t do that, Mitch insisted. Mama Rose and Vinny have Benny and Candace under their protection. Whatever, Sandy basically said, adding that Mama Rose and Vinny knew that Mitch had lied. 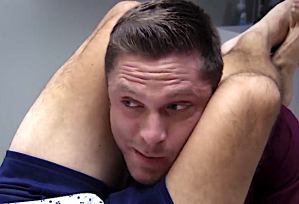 ‘WHOA! YOU DON’T WEAR UNDERWEAR?!?’ | Later, Madison’s extremely bad, no-good night at work continued when he was summoned to Wyatt’s room. Strapped up for throwing piss — “Well, when I drank it, it was water!” — the poor little rich boy did his usual routine, griping that he wasn’t getting enough drugs and that it was unfair for him to be cuffed up. Could Madison at least hand him the cup in which he was supposed to pee? Sigh, OK, said the nurse. And as he reached across Wyatt to get it, the scuzzball used his legs to put him in a headlock! Rather than chomp down on Wyatt’s johnson to break free, Madison unstrapped the jerk, who then proceeded to choke him out and steal his scrubs. (Hilariously, Wyatt was taken aback to discover that Madison went commando.)

After using the nurse’s key card to score a CVS’ worth of drugs, Wyatt returned to his loft, only to discover Lena there. And some random dude — Katheryn’s boy toy, Broderick. “Did she promise you this place, too?” he asked. “This is my place!” Wyatt replied. Once they realized who each other was — and Wyatt got over the “ew” factor of anyone sleeping with his mother — they bonded over their mutual fondness for drugs… to the point that Wyatt said Broderick could keep right on crashing at the loft so long as he brought in some more blow. (Although as it was, it looked like Broderick had enough on hand to go skiing… !) 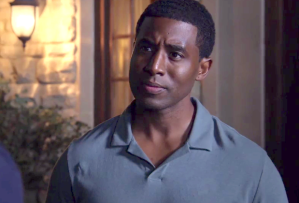 ‘DO YOU HAVE ANY IDEA HOW CLOSE TO DEATH YOU ARE RIGHT NOW?’ | When Don swung by the prison in hopes of convincing Katheryn to give him and Jim power of attorney, he miraculously managed to make his pitch without letting on how dumb he had to know it was even to ask. Hanna and Hanna alone was the only person Katheryn was going to trust with her fortune. Across town, Tanner showed up at David’s place to see Jeffrey. “I had something for you, but I didn’t bring it,” said Justin’s brother, poking the first of a zillion holes in his own BS story. What was the deceased like? Tanner wanted to know. Except he’d already told Jeffrey that Justin always confided in him. “Dude, you are a terrible liar,” Jeffrey should’ve said but didn’t. Instead, he let Tanner ask, “What did Justin like sexually? Did you guys dress up?” Seriously?

For reasons I couldn’t begin to comprehend, Jeffrey continued the conversation, “revealing” that neither had Justin had HIV nor did he himself. Brushing right by that whopper that Tanner had told, the homophobe beseeched Jeffrey to come to Justin’s memorial service. When Jeffrey said that Tanner was just like his brother — in that he didn’t take no for an answer — the psycho took it to mean, “You think I’m a queer?” At least Jeffrey picked up on the homophobia in the way that Tanner said the word. Jeffrey may not be the sharpest knife in the drawer, but he’s not a total fork. 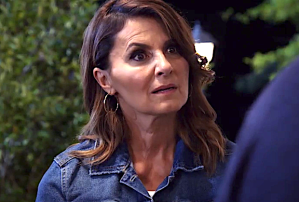 As the episode neared its conclusion, Don reported to Jim that he’d failed to sway Katheryn. So Jim called Akil to find a girl named Diamond or Dallas (well, that narrows it down!) so he could get her thrown in the pokey to scare his wife into cooperating. Before Akil could complete his mission, into his car hopped Veronica’s goon, Marco, who phoned her to say that she was clear to leave her house. As for Akil, “I’m about to do it right now.” Shortly, Veronica joined Celine at Jim’s doorstep and delighted in presenting him with a court order to pay his babymama $50k in emergency funds for their children. Pursuing this, he warned Celine, wasn’t in her best interests. Hell, she was lucky she wasn’t in prison after what she did. “And what did you do?” asked Veronica. “She killed Amanda,” Jim replied. Dun-dun-dunnn! Hit the comments with your reaction to this week’s bats—t-crazy episode. Does anyone really believe that Wyatt could’ve gotten the better of Madison? What is Conley’s endgame? And are we seriously getting an Amanda twist this late in the game?