The madness only intensified in Tuesday’s The Haves and the Have Nots. Even in an episode that didn’t feature queen of mean Veronica, we still got Candace in a hotel room with an unexpectedly (mostly) naked man, Benny saying, in essence, ho, ho, ho, despite the fact that Christmas is months away, and a fight being started that could turn out to be, at least down the line, one to the death. Who did what to whom? Read on…

‘YOU’RE NOT GOING TO DIE’ | Off the “bombshell” that Tanner dropped on him, Jeffrey hemmed and hawed and finally revealed to Madison that Justin had been HIV positive. “Tanner’s probably just trying to give you anxiety,” Madison suggested. If only anyone ever listened to Madison, who was chagrined to learn that Jeffrey and his stalker hadn’t even always used condoms. Was Madison worried about himself? No, he and Jeffrey had used condoms, and on top of that, Madison was on medication to prevent him from contracting HIV. (That such a thing even existed came as news to Jeffrey.) Shortly, Madison was able to inform his boyfriend that his test had come back negative. Madison even went so far as to access Justin’s medical records to reassure Jeffrey that the cop had been negative, too. As it dawned on Jeffrey that duh, Tanner had lied, he also realized that oops, he had given Justin’s brother his address. That night at David’s, while Madison made ZZZs, Tanner phoned Jeffrey and said that it had been Justin’s dying wish that his lover have this mystery something that had been left in his possession. Though Jeffrey wisely declined to meet with Tanner, he did agree to attend Justin’s memorial service the following day. 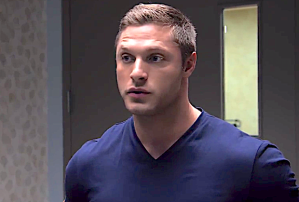 “Can I ask?” said Madison, who hadn’t been asleep as I or Jeffrey had thought. Soon, Madison was sorry that he had asked. It was extremely unusual for the memorial service to be held only a day after the death. Leave it — and Justin’s family — alone, Madison pleaded. If only anyone ever listened to Madison! Shortly, the nurse was called in to work because Keesha was hungover sick. On his way out, Madison suggested that Jeffrey could use a job — and the hospital’s hiring. At work, Madison was greeted by Wyatt, whose idea of a hello was, “Come on, man, I need some pain pills.” Just as he had with Nurse Trudy, Wyatt tried to flirt his way into a fix. And just as with Nurse Trudy, he failed miserably. Which struck him as incredibly odd. “You can’t resist me,” he insisted. “None of you people can.” And yet… they all did. 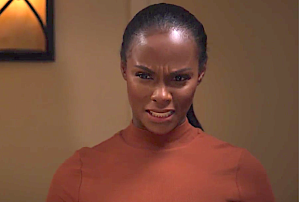 ‘I HATED LIVING IN THE GHETTO THEN, AND I HATE IT NOW’ | In other developments, Benny took Candace to a dump of a motel at which they could crash until he closed on his house. He thought that she was just being snobbish, turning her nose up at the place the way she does anything short of the Four Seasons. But it was actually that it reminded her of Q, who’d been killed at a similar dive. Changing the subject, Candace beseeched her brother to get a suit for his date with Rianna and treat her right, not like just another girl with whom he wanted to smash. Just then, in came Mitch, who was surprised that Candace wasn’t already long gone. (I was surprised that he already knew where the sibs were — they’d literally just walked in; does he have a tracker on them?) While Benny went to shop for a suit, Mitch and Candace were going to go to dinner. But she took so long getting ready in the bathroom that he… um, OK. He stripped down to his boxer briefs and offered himself to her. Pass, she said (and so did her expression, pictured). Not even once for old times’ sake. Failing at that, Mitch warned Candace that if the Cryers talked to his grandmother, the Malones’ implied protection might be null and void. OK. Good talk. Weird but good. 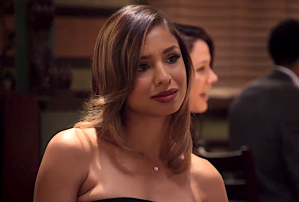 Meanwhile, Benny haggled over the price of his suit as if he was still a pauper. It didn’t matter to him at all how often the pretty salesclerk told him that the designer was Italian as if Italian was a name or a brand. He also managed to not only offend the woman, basically regarding her like a prostitute, but still get her phone number. (Pays to be that handsome, I guess.) At dinner with Rianna, Benny was taken aback to find that his realtor only wanted to sign paperwork. Beyond that, she wasn’t interested. “There’s something about you,” she said, “that’s bad news.” Suddenly, she suggested that they just go back to her place and have sex — a trap into which he refused to fall. He was willing to leave with her and cuddle some, though. Mm-hmm.

No sooner had Rianna reminded Benny that she’d just gotten out of a toxic relationship than in walked Sandy, drunk on rage-ohol and pissed that “this bitch” had killed his son. “What are you, a Black Panther?” he spat at Benny. “You gonna save her?” In fact, he was. Rather than leave Rianna alone with this clearly deranged a–hole, Benny cracked a beer bottle over his head — a move that scenes from next week suggest will have dire repercussions. So, what did you think of “Black Panther”? Did Benny just get himself killed? And do we all assume the “thing” Tanner has for Jeffrey is a bullet? Hit the comments with your thoughts and theories.