This week’s episode of The Chi, as promised, brings us full-circle to the night that Kevin finds out about Jake and Jemma, Kiesha gives birth and Douda takes a bullet on a hotel rooftop.

But if you’re hoping to find out who pulled the trigger on that last one… you are left wanting by the end of the hour.

Yep, by the time the credits roll we still don’t know who of Mayor Perry’s many enemies had the motive, opportunity and ability to shoot him in cold blood on the night of the Olympics gala. Heck, we don’t even know if Kiesha had a boy or a girl.

But that’s not to say that nothing happens in “The Spook Who Sat By the Door.” Read on for the highlights of the hour, broken down by character.

KEVIN, JAKE AND JEMMA | Jake urges Jemma to tell Kevin about their relationship, but she balks. “Either you tell him, or I will,” he warns her. All three of them get gussied up and attend Mayor Perry’s try-to-get-the-Olympic-bid gala as youth ambassadors for the city. But Jake and Jemma eventually sneak off… and Kevin follows them and finds them kissing in a stairwell. He is crushed. 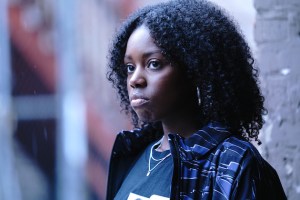 KIESHA | Kiesha flips through her baby book and asks Nina, “I’m not going to have one of these, am I?” But her mom hugs her and promises she will — when the time is right. At work, Kiesha’s co-worker flirts with her and in a non-threatening way makes it clear that he knows about her kidnapping. “I’m just glad you survived,” he tells her. Soon after, she starts having contractions. She eventually makes it home and, with the help of Nina, Dre, Jada, Octavia and a midwife, gives birth in a pool in the living room.

EMMETT AND JADA| Emmett stops by his mother’s house to bring her a juicer, which he hopes will help boost her health. He’s very afraid that she’s going to die before he can buy her a house and make her proud of him, he says. Jada says she is proud of him. Elsewhere in the episode, Jada asks Dre to make sure that her will is carried out according to her wishes, if things go downhill. (And nope, she still doesn’t want Dre to tell Nina.) And later, Suede tells Jada that he loves her. Meanwhile, Emmett is mean for no reason to Darnell, who knows something’s up. He presses his son to tell him what’s wrong, and eventually Emmett breaks down in sobs in his dad’s arms as he tells him about Jada’s cancer. 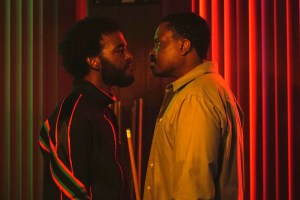 TRIG AND IMANI | After Shaad gives Imani attitude as she’s trying to help him get ready for a job interview, Imani tells Trig to speed up his pal’s exit from the house. The interview does not go well, particularly after the interviewer realizes that Shaad did time. The men go for a drink afterward, and Trig warns his friend to respect Imani’s role as the lady of the house. Shaad angrily asks if “that thing over there” means more to Trig than he does. “She’s a woman. My woman,” Trig replies. “And yeah, she does.”

DOUDA | The Olympic gala goes well, but while the Perrys are dancing in the spotlight, Roselyn makes it clear that she wants an official position in his administration or she’s going to divorce him. Later, Tracy introduces the mayor, and he talks about watching Carl Lewis in the Olympics when he was a child. “I don’t want the world only to cheer for Black folks when we’re winning gold medals” or rally behind them when they’re the victims of violence, he tells the crowd. “I want the world to cheer for us just because.” Afterward, he asks Tracy to meet him on the roof. Before he gets there, though, Marcus tells him to be careful with the female company he keeps. When Douda tells him to mind his own business, Marcus is quick to remind him that “You wouldn’t be here if it weren’t for me.” And Mayor Perry does not like that. He goes up to the roof and gazes out at his city, turning around when he hears the door open. And then we see a gloved hand firing a gun. The bullet hits him in the torso, and he drops to the ground.

Now it’s your turn. Who do you think shot Douda? Sound off in the comments!