Elite‘s new students really don’t waste any time during the Season 4 premiere, making waves and stirring up teenage hormones as soon as they arrive for the first day of school.

The trio of newcomers are the children of new principal Benjamin, a former CEO who’s been brought in to fix up Las Encinas after, you know, a series of murders and scandals. His daughter Ari catches the attention of both Guzman and Samuel when she almost beats the former during a swim race. Her twin brother Patrick, meanwhile, flirts with Ander in the boys’ showers while comparing battle scars. (Patrick has one along his spine after a car crash left him bedridden for two years.) 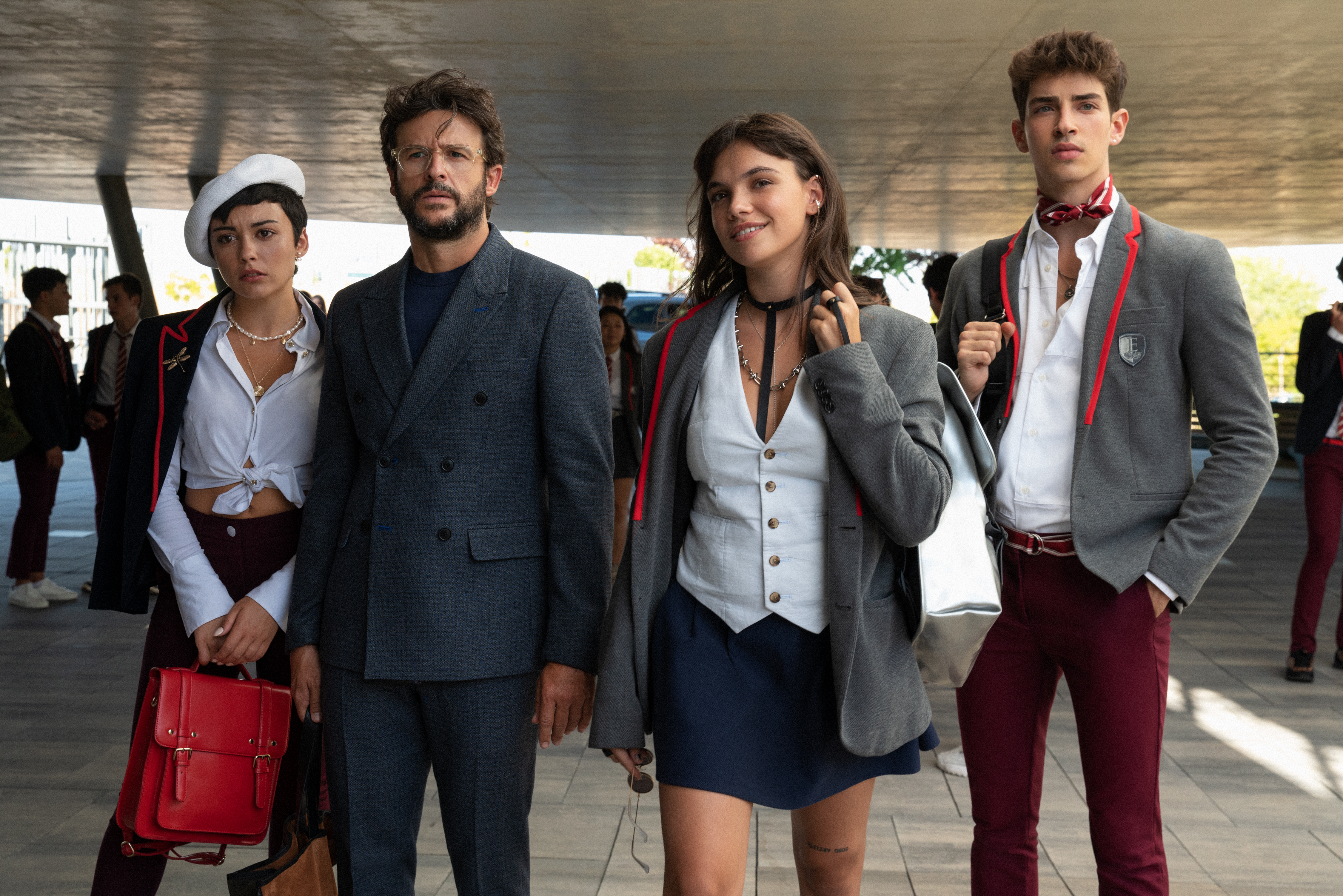 Then there’s Mencia, their brainy, rebellious younger sister who was moved up a grade. While Ari is super supportive of their dad, Mencia constantly calls him out and squabbles with her siblings. There’s clearly a lot more going on with this family dynamic that we don’t know about yet, because Dad tells Ari, “You’ve got enough to handle with Mencia, and you’re not making progress.” And later, Ari lashes out at Mencia and exclaims, “Haven’t you hurt us all enough already?”

At school, Mencia takes a liking to Rebeka, but once Rebeka learns that Mencia is also the principal’s kid, she switches seats. Benjamin isn’t exactly helping his children make friends, what with him abruptly firing Ander’s mom and telling Samuel and Omar that they need to take an assessment test to prove they deserve their scholarships. 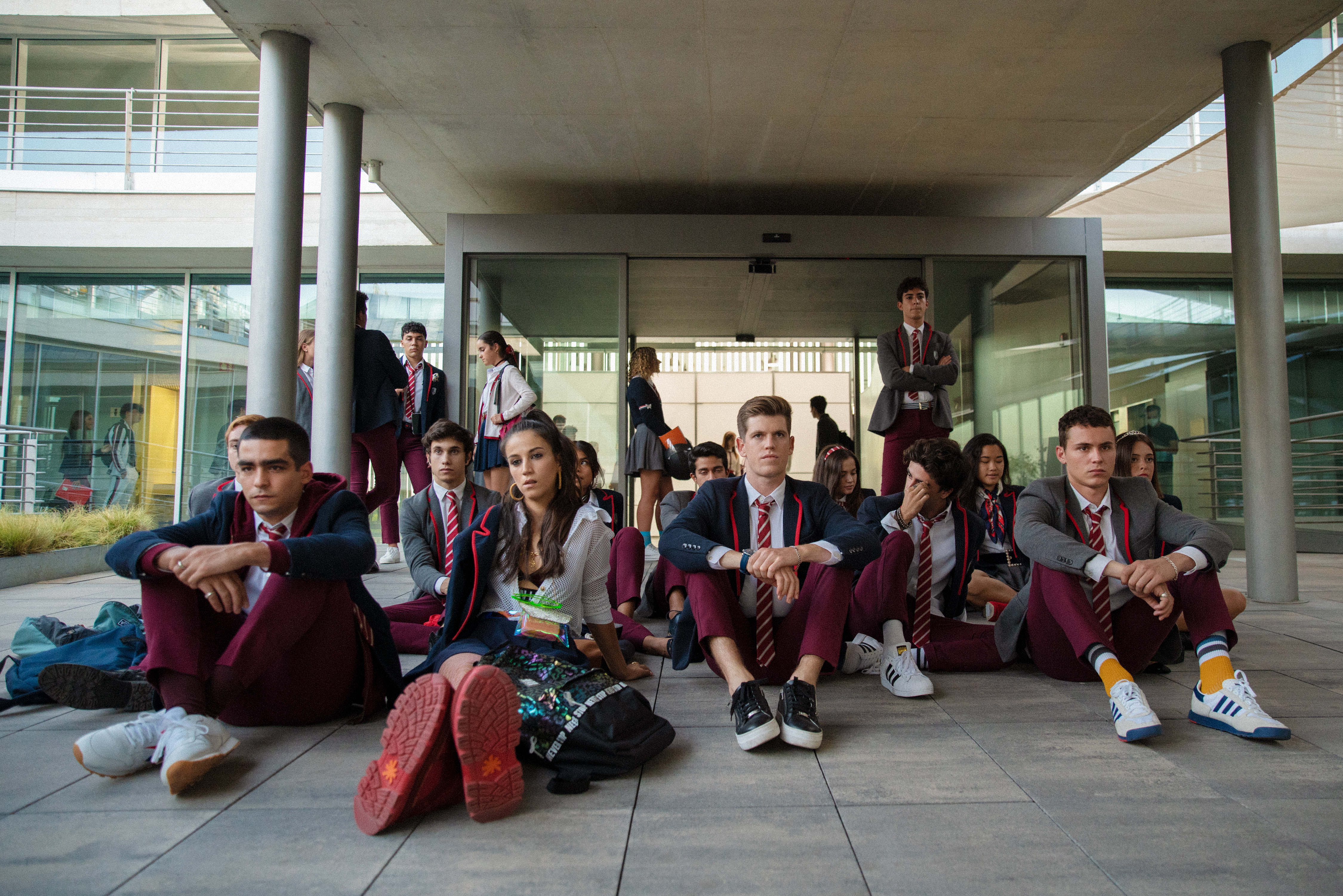 While video-chatting with Nadia (more on that long-distance romance here), Guzman promises that he’s taking care of her brother. The next day, Benjamin, Ari, Patrick and Mencia arrive to find Guzman, Ander, Rebeka and several other kids staging a sit-in outside, although I’m not sure they entirely got the concept, since the principal is able to just sidestep them. Mencia joins the protestors in solidarity, then suggests the only way to get through to her dad is through his one weakness: Ari. Someone needs to chat her up so she will talk to their dad, and everyone agrees that person should be Guzman, who is reluctant seeing as how he’s with Nadia. “You don’t need to fall for her,” Ander says, and it sure feels like foreshadowing.

So Guzman takes Ari out for drinks, and they two hit it off, even though Ari is surprised to learn that Guzman has a girlfriend. Ari also opens up and reveals that she, too, lost someone: Her mom died in a car crash. Then she agrees to talk to her dad, but another spat with her sister leads Mencia to reveal that Guzman is just using Ari and would never be interested in someone like her. A hurt Ari tells her dad to test Samuel and Omar.

Meanwhile, Patrick invites Ander to go clubbing and promises to get the test answers for Omar, who insists they don’t need Patrick’s help. Despite that, Ander meets up with Patrick at the club, where the new kid proceeds to feel him up through his clothes (“If you’re not naked, it isn’t cheating,” Patrick reasons). Ander seems to be enjoying it, but eventually pulls away and says he would do anything to help Omar — except betray him. Patrick still gives Omar the answers, and he passes with a whopping 97 out of 100. It’s not exactly subtle, but there’s nothing Benjamin can do. (Samuel gets a passing 73.)

Back at the pool, Ari approaches Guzman and says she’s been chatting online with Nadia. She even told Nadia about their date, leaving a stunned Guzman standing there as everyone else starts racing. When she beats Guzman, Ari reveals that it was a lie, but she won’t be taken for a fool. 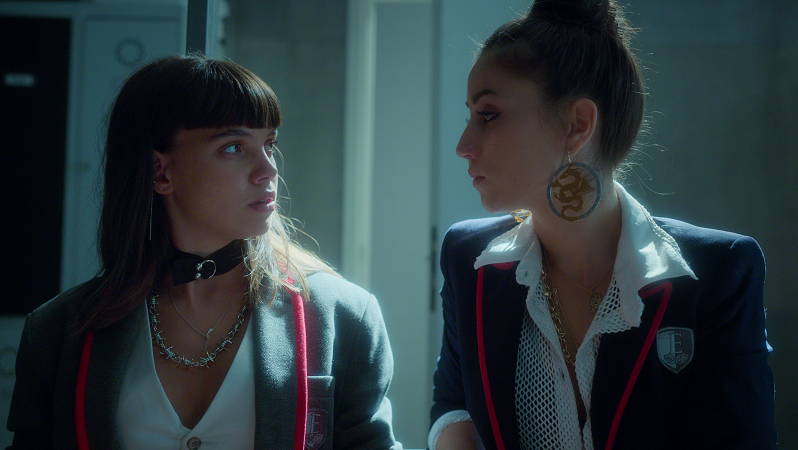 Elsewhere, Rebeka admits to Mencia that she also likes her vibe, so they hit a rooftop club. (When do these kids ever do homework?!) Mencia promises to get Samuel’s name out of Rebeka’s head and replace it with her own, then kisses the other girl. Rebeka leaves abruptly after the smooch and avoids Mencia at school. Things don’t go much better at home for Mencia. After a fight with her dad, Benjamin takes away Mencia’s access to her accounts and his money. She runs off to the club, hoping to meet up with Rebeka, but when she doesn’t show, Mencia hooks up with an older guy, who leaves money for her on the nightstand.

And of course, what would Elite be without another flash-forward mystery? This time, there’s a female body floating in water outside the lake club restaurant, and Guzman is being asked what happened by the authorities as fireworks go off. Then at episode’s end, we see Ari being given CPR as everyone watches on. (Samuel seems especially distraught.) Finally, a voice announces that Ari is alive!

Elite fans, what did you think of the season opener? Grade it below, then hit the comments!