We’re just one week away from The Chi episode that showrunner Justin Hillian said will catch us up to the huge events we saw at the start of the season. And Sunday’s episode moves into place many of the pieces necessary for that flash-forward to happen.

Kiesha chooses an adoptive parent for her baby. Jake and Jemma kiss. Mayor Perry starts getting jazzed for the gala. (Little does he know!)

Read on for the highlights of “The Girl From Chicago,” broken down by character.

DOUDA, ROSELYN AND TRACY | Tracy wakes up at the Perrys’ apartment the morning after… whatever it was that happened at the end of the previous episode, and tries to creep out. But Roselyn is sitting at the breakfast table, waiting for her. Mrs. Perry is not at all friendly, but she invites the other woman to stay and eat something: Pro-police protesters surrounding the building mean that Tracy isn’t going anywhere for a while. Later in the episode, Douda arranges for Tracy to try on a bunch of formal gowns and shoes, in preparation for introducing him at the big bash.

KIESHA, NINA AND DRE | After meeting with an (I’ll say it) annoyingly godly couple who’ve already adopted three other children, Kiesha visits the office where Octavia — aka the woman who wants to raise the baby alone, and whom Kiesha had already turned down — works. Kiesha is impressed by Octavia’s architectural design firm and buoyed by the woman’s estimation of what kind of building Kiesha would be: “You’d be strong and sturdy. Survive fires and hurricanes. You’d be too strong to ever be destroyed.”

As she leaves the office, the mom-to-be gets sharp pains in her abdomen. Octavia brings her to the hospital, where Nina meets them. The doctor says the discomfort is just Braxton Hicks contractions (aka false labor), but that Kiesha’s blood pressure is so high that he wants to induce labor in order to avoid complications. Kiesha and Nina are on board, but Octavia points out that he might just want to do what’s expedient instead of what’s best for Kiesha and the baby. So after they wait a while (and Kiesha drinks some water to offset the salty lunch she had), her blood pressure comes down and all is well. Relieved, Kiesha looks at Octavia and says that she’s going with her instincts, and “my gut keeps telling me it’s you” who should raise the child. They hug… and in the corner of the room, Nina looks less than excited.

But maybe that’s because she hasn’t been able to get Dre on the phone, despite all of the texts and voicemails she’s left. We know that Dre is dodging calls because she’s with Jada at the chemo appointment, and Jada doesn’t want Nina to know about her illness before Emmett does. But Jada doesn’t know that. And at the end of the episode, when she sees a text to Dre from Jada saying “Thank you for keeping our secret,” you just know this all isn’t going to end with a calm conversation and a quick fix of the misunderstanding. 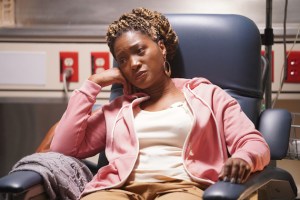 EMMETT AND TIFFANY | In accordance with their newly open marriage, we see Tiff with Dante (doing what she told Emmett he does best) and Emmett with another woman: Tiff is definitely into what’s happening, but Emmett is distracted. When Tiff later finds out that the woman Emmett brought home is one of her former co-workers whom she hates, she decides that they need to lay down rules about who they can and can’t sleep with.

That makes things rather testy between the two of them… until he brings EJ to Jada’s house one afternoon and finds her sick from chemotherapy. She finally tells him that she has cancer, and the news rocks him. Later that night, at home, Tiff realizes something is wrong. And when she asks him about it, he starts to cry and pulls her into his lap, where she hugs him close.

KEVIN, JAKE AND JEMMA | After Douda — er, Mayor Perry — steps in, Jemma and Jake avoid punishment for his incendiary, profane appearance on her school talk show. But Jemma loses the show, which makes her mad. She comes up with the idea of a walk out the next day, and assumes that Kevin will join her. But he’s just promised to Nina, Dre and their family therapist that he can be trusted to do his school work and stay out of trouble. So he balks, and Jemma gets mad, and she and Jake wind up being only two of three students who heed the call to protest racism by walking out of class the next afternoon. 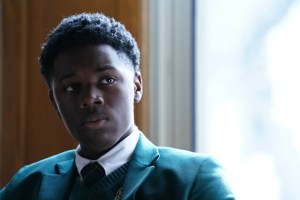 Jake ups the ante by pulling a fire alarm, then tells her that they’ve got to kill time before going home. So he takes her for a fish sandwich and they wind up kissing. Meanwhile, Papa coerces Kevin to coming onto “Papa’s Pulpit,” his online talk show/podcast/whatever it is and telling Jemma how much she means to him. (Side note: Some of those viewer comments, like “Who’s Van Jones?,” had me laughing.)

TRIG AND IMANI | Imani secretly meets with Trinity, the woman from Nuck’s trap house, and slips her a burner phone. They make a plan to meet up the next evening so Imani can help her flee. But when the time comes, Trinity is a no-show. So she storms down to the community patrol center to yell at Trig and Tracy that they need to “do more!” in order to help the women in the house. Tracy says she’s been trying to get it raided for quite some time. Trig points out that the women, at least ostensibly, are there of their own volition. But Imani will not be calmed. “If you don’t handle it quietly,” she promises, “I’m gonna handle it loud as f–k.” That night, Trig visits Nuck, pulls a gun on him and gets many guns pulled on himself in return. He comes home and tosses the burner phone at Imani. “Nuck had it,” he says, adding sadly that Trinity’s body had been found on Bishop Street. Imani cries and won’t talk to him.