Assane Diop’s quest for justice reached its climax in very theatrical fashion during the finale of Lupin Part 2.

Flashing back to three weeks before the Pellegrini Foundation’s big charity concert, the episode delivers a very fun twist: Pellegrini’s new financial expert, Philippe Courbet, isn’t who he appears to be. While flying a drone through Pellegrini’s office, Assane and Benjamin discover the name of his wealth manager, Lucas Lacroix, aka the man whom Assane helped recover his stolen briefcase just an episode ago. It was actually Benjamin who bumped into Lacroix and took the briefcase just long enough to copy all of Pellegrini’s financial data before Assane handed it back to Lacroix. 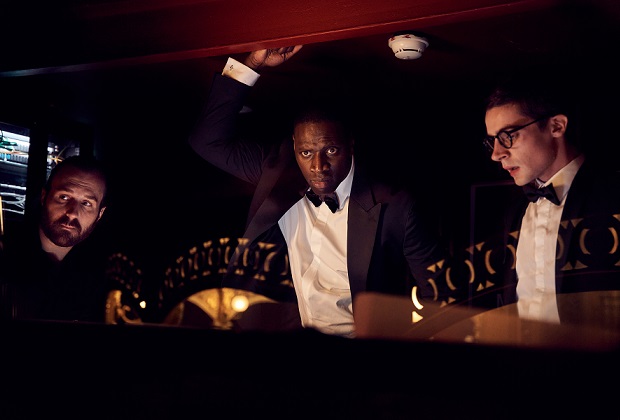 After that, Assane declares that they need an accomplice, and they plan on finding the perfect one by staking out the Lupin bookshelf at the library. As reader after reader comes through the section, the pair dismiss them — until a punk-like young man remarks that Assane is pretending to read and Benjamin’s book is upside-down. Now that they have their man, they give him all the info on Pellegrini’s bad deeds and agree to pay him in diamonds. Then they give him a makeover… into financial expert Philippe Courbet.

Assane calls Lacroix, pretending to be a colleague from Brussels, and tells him of a man with questionable methods who is trying to poach their clients. Lacroix, in turn, rings Pellegrini to warn him, but Pellegrini is intrigued. So when Courbet promises to make him even more wealthy, he signs up.

Fast-forward to the day of the concert, and “Courbet” and Benjamin (who’s disguised as a delivery guy) are sneaking Assane into the theater in a box for the donation app’s computer equipment. Once the performance begins, everyone takes their place — Courbet behind the monitors, watching the money roll into Pellegrini’s account, and Assane with a knife to Pellegrini’s throat! Assane threatens to kill Pellegrini if he doesn’t tell the truth, so he confesses to hiring Assane’s father with the intention of framing him and getting the insurance money. He also admits to having Leonard kill Assane’s father. 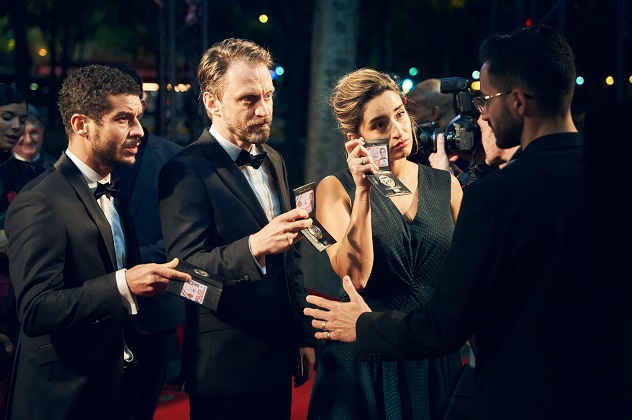 With that, Assane disappears into the shadows, but every security guy in the building is soon chasing after him in the rafters over the stage. Finally, Dumont corners him and declares, “Stop, or I’ll shoot.” As Assane is about to possibly surrender, a glitzed-up Guedira, Belkacem and Laugier show up to arrest Dumont for his crimes, having seen his videotaped confession on Assane’s drive. Belkacem is about to go after Assane, too, but Guedira urges her to let him go, and she actually does!

Assane, however, is not about to leave without one more trick. With a photo of him and his dad projected onto the stage by Courbet, Assane steps out in front of the crowd and reveals the truth about what Pellegrini did to his father and Fabienne Bériot. Then as cops in tactical gear swarm the stage, Assane declares, “Curtain,” and Benjamin shuts off the lights, creating a frenzy of fleeing attendees.

Outside the theater, Benjamin and Courbet make their way to a car. Benjamin gives his accomplice the second diamond he was promised for having completed the job. The young man wonders why they would allow all that money (9 million Euros!) to go to Pellegrini. When Benjamin say it’s not Pellegrini’s account, Courbet assumes it’s Assane. Nope, it truly is going to the foundation! They take off without Assane, but Benjamin’s not too worried about him; he always figures out a way. 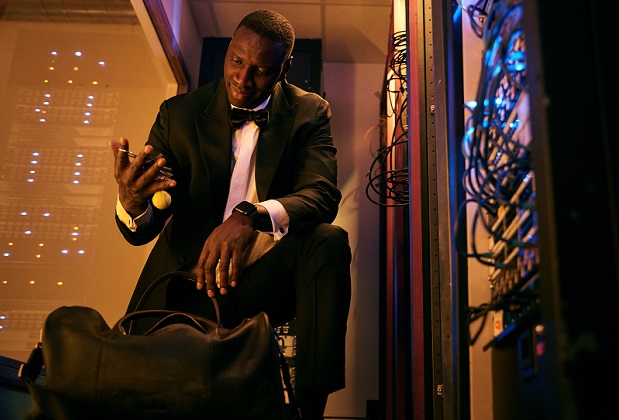 In the midst of the chaos, Assane sneaks into a room and changes into a fire protection disguise, then walks right up to a cop and tells him Diop is on the roof. But as Assane later takes off his outfit in an alley, some officers spot him. He races off to the river, where he escapes in a boat. Meanwhile, Guedira receives a recording of Pellegrini’s confession from Assane’s watch, allowing the authorities to arrest him, at last.

Back at Claire and Raoul’s home, something starts beeping: It’s a small device with a message from Assane to meet him at Raoul’s bridge, aka the the place where they decided on their son’s name. When Assane reunites with his family, his declares that it’s finally over, but he’s only causing them problems and needs to go away. Plus, he’s still a wanted man. “We don’t want to lose you,” Claire says.

“I’ll be back,” Assane promises. “You won’t see me, but I’ll be watching over you. I love you, both.”  A tag after the finale credits confirms the series will return for Part 3.

Lupin fans, what did you think of the finale? Grade it below, then hit the comments with your thoughts!