It’s been 11 years since the Trinity Killer murdered Rita on Dexter, but some fans still associate Julie Benz with the character, despite the many roles she has since played.

“People on social media who fell in love with Rita approach me like I’m her,” Benz tells TVLine with a chuckle. “And I have to say, ‘Oh no! I’m not that nice.'”

Perhaps those same fans’ perceptions will change when they see Benz star as Celeste Beard, a manipulative and parasitic woman who married her husband for money before orchestrating his death in Secrets of a Gold Digger Killer, premiering Sunday at 8/7c on Lifetime.

Based on a true story, the movie follows wealthy widower Steve Beard (Riverdale‘s Eli Gabay) as he courts and weds a pretty and flirtatious waitress (Benz) at his Austin, Texas country club and adopts her teenage daughters. Everything goes great until Steve realizes his new bride Celeste is spending his money at a frighteningly rapid pace. When Steve confronts Celeste, she responds with an epic meltdown and sets the stage for Benz to relish in her character’s abhorrent behavior in a number of scenes.

“My favorite scene is when she has a breakdown on the bed about the clothes,” Benz recalls of the GIF-worthy moment. “There are clothes all over the place, and I think I have lived that scene before in my life. I really went for it, and I scared [Gabay] a little bit. I scared everybody on the set that day. Robin Hays, the director, would yell ‘cut,’ and I would just start laughing.” 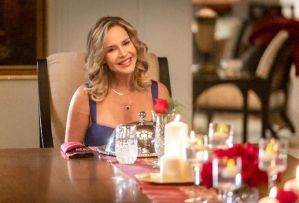 The actress — who used her 14-day quarantine in a Vancouver hotel room to watch every interview, read every book and listen to every podcast she could about Celeste before shooting — says she hopes her performance, replete with a Texas accent, is entertaining but respectful.

“It’s a fine line to walk because the character is incredible, but the real woman she’s based on did horrible things,” Benz says. “The real Celeste did so many horrible things, we didn’t have time to explore them all. It’s tragic. Steve was a sweet and kind man, and she really manipulated and took advantage of him.”

Benz also tried to keep an open mind when it came to Celeste’s guilt — at least while making the movie. “She’s incredibly convincing, so I really tried not to pass judgment on her,” she says. “In hindsight, months after the project, clearly there’s a reason she’s in prison. But while filming, I struggled with her innocence or guilt.”

Although Celeste’s daughters didn’t participate in the making of Secrets of a Gold Digger Killer, Benz commends their courage in helping to bring their mother to justice. There were even times when the role took a toll.

“As juicy as the story is, we do have to remember the real people involved who paid the price for Celeste’s actions,” Benz divulges. “It took tremendous courage for her daughters to do what they did, and even she admits she was not a good mother. They were bounced in and out of foster care, depending on who she was dating.” 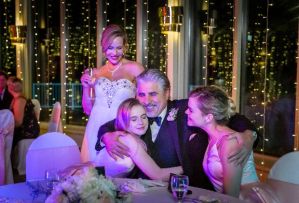 “There was one scene where I felt horrible after,” she adds. “I was apologizing to [Georgia Bradner], who plays one of my daughters, and I really felt like I had had a huge fight. I had a hard time recovering from that scene. I didn’t have my husband or my dogs or the touchstones that get me back to my life. But the cast and crew were so wonderful.”

Benz thinks it’s equally wonderful that her former Dexter costar Michael C. Hall is reprising his titular role in a new revival, even if the show picks back up without her.

“I think Dexter has moved way past Rita,” Benz opines. “It doesn’t make sense for her to be on his mind as a ghost because she was only his cover. He didn’t internalize her, so there are no plans for Rita to show up. I would obviously do it in a heartbeat if they asked. But I’ve always said Rita shouldn’t make an appearance in his head because she didn’t know the real him. She didn’t know the Dark Passenger.”