“I was obsessed in a freak-ish way with this show,” Hannah Einbinder, who plays the show’s pretentious young writer Ava, tells TVLine. “I was looking at it like, ‘This is such a great piece of comedy.'” (We’re right there with her.)

Hacks follows the budding collaboration between Las Vegas mainstay stand-up Deborah (Jean Smart) and the down-on-her-luck Ava as they partner up to buoy each other’s careers and refresh Deborah’s act. To say it’s a bumpy road for these polar opposites would be an understatement, yet the characters’ colossal differences serve up a smorgasbord of laughs, drama and emotion as evidenced in the fiery Season 1 finale (now available to stream on HBO Max; read our recap here).

To cap off the show’s freshman run, we spoke with Einbinder — who’s an experienced stand-up comedian herself — to discuss Ava and Deborah’s explosive fight, working side-by-side with a TV legend and her hopes for the second season.

TVLINE | First off, congratulations on the Season 2 renewal! Any word on when production might begin?
Thank you! I have heard nothing as of now, but the sooner the better works for me! I feel like I’ve been watching it alongside everyone.

TVLINE | What were your initial thoughts of the script after you first read it?
I was really obsessed with this show. I’m not saying “obsessed” the way people use it like, “I like it so much!” No, I was obsessed in a freak-ish way with this show. I was looking at it like, “This is such a great piece of comedy,” and I didn’t know when I’d be able to do comedy again because my industry was wiped out by COVID and there was no vaccine in sight. So, I just devoted all of my time and energy to working on it. 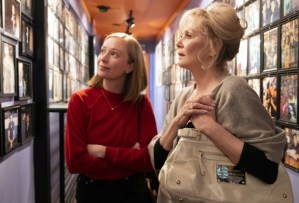 TVLINE | What was your first meeting with Jean like? When did you know your chemistry was a fit?
She called me the night before [my audition] and eased a lot of my anxiousness about going in and facing her… which is so classic Jean, just being sweet and doing something she really didn’t have to do. But she’s such a lovely, great person.

In person, I think it was immediate. We just get along. We always have. We have a similar sense of humor and that includes a little bit of poking and prodding. She really let me have it in the audition, which was the interview scene from the pilot. I felt connected and excited by it. That feeling still fazes me.

TVLINE | We have to talk about that finale showdown where Deborah slaps Ava! What was it like to film that scene?
I was shocked when I read it. When we did our first take, the camera was on Jean, and I couldn’t help but cry. Jean told me after our first take, “Sweetie, you’ve got to save it for when the camera’s on you,” and I just couldn’t help it. It cut so deep. It’s not even the force of the slap, it’s just these two people who I was rooting for and the conflict… I think both of us feel very close to our characters, and I do feel like a viewer, at times. I felt like I was watching my parents break up, and it was like, “Not again!” [Laughs] It was really emotional. I hope others felt what I felt, because it was real.

TVLINE | The season ends on a total cliffhanger, with drunk Ava emailing dirt on Deborah to some writers who are looking to exploit her. What can we expect from Season 2?
I have literally zero, zero, zero idea. I have not been told anything. I try to predict what’s going to happen, but really, I am alongside everyone just being like, “What’s the deal?!” If Deborah finds out that Ava sent that email, my ultimate hope is that they work together to stop those people from using it. I hope it becomes about the two of them teaming up against a common enemy as opposed to causing a huge fight.

TVLINE | It seems like Ava can’t get out of her own way. Do you think she’s a little too forthcoming sometimes, and that maybe someone should take her phone away when she’s imbibing?
[Laughs] Yes. I think she should absolutely not drink and text. That girl really needs to go on airplane mode whenever she has a couple sips. She is sometimes reckless, for sure. I hope she gets a handle on that, I really do.

TVLINE | I have to ask: What’s the deal with all of the “large hands” quips? Is there some sort of inside joke there?
It was written years ago, before I was even born! No, I’m kidding. It was written way before anyone was cast, way before this was real, and just meant to be a little roast-y thing. My hands are pretty standard, if anything, on the smaller side for my size. But it is true that when I was a youth, my hands did grow before the rest of my body. There’s a photo in Episode 10 in Ava’s childhood bedroom — Deborah picks up the photo and says “this is borderline extraterrestrial.” That photo is not doctored. That is the size of my hands relative to my body, and everyone was shocked. Truly everyone. Completely shocked.

TVLINE | Lastly, do you have a favorite on-set memory of shooting with Jean?
There was a day where we were shooting the gas station scene. It was Episode 2, on our way to the antique shop, when Ava runs in to use the bathroom and get Deborah a Coke from the fountain. They had to remove the windshield of the car, and Jean accidentally pressed the windshield wiper fluid and we all got hit! [Laughs] I think that’s probably on someone’s camera somewhere, but yeah. That was a cute little moment.