The finale of Hacks delivered what we knew was brewing all season long: a fiery, no-holds-barred showdown between Deborah and Ava that saw insults slung and someone’s face slapped (GASP)!

Despite Ava’s loyalty in refusing to spill Deborah’s tea to some British writers (oh hey, Chris Geere and Kirby Howell-Baptiste!), the you-know-what hit the fan when Ava found out that her boss was throwing in the towel on the new material they wrote. So how did Deborah’s final show at the Palmetto go, and were the women able to patch things up after their spat? Read on for a full finale recap.

At the commemoration for Deborah’s new street, Ava tells Marcus that the comedian has been oddly avoiding her. She doesn’t know that Deborah knows about her recent interview, and the fireworks show is juuust around the corner.

As Marcus prepares to air his work grievances to Deborah, Ava gets a call from her mom: Her dad had another stroke, and she needs to head home… but that means missing Deborah’s big night. She breaks the news to Deb, but the comedian remains cold and distant. Ava leaves a gift and leaves quietly. 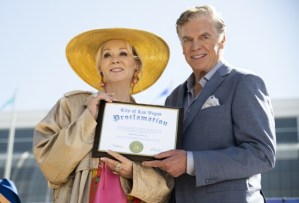 Jimmy runs into Ava in the hotel lobby and tells her Deborah’s not doing her new set after all, which causes Ava to storm back to the comedian’s dressing room. She confronts her about not doing the new routine, and Deborah admits to knowing about the job interview. Ava is hurt that Deborah thinks she would lie about her dad’s health, and calls her boss out for her lack of empathy and inability to maintain relationships. Deborah snaps back, calling the young writer pretentious before kicking her out of her dressing room. The scuffle ends with Ava calling her a hack, and Deborah slapping Ava across the face. (Oh, snap!) “I quit, obviously,” Ava says before taking off.

The young writer then does the unthinkable: She asks Kayla for the emails of the British writers who interviewed her. She’s ready to reveal some dirt about her now-former boss.

Marcus asks Deborah to talk, and before he can deliver his full spiel, she says she’s taken him for granted. She wants him to help take her business to the next level, and she gives him a raise and a promotion. Marcus tells the good news to Wilson, but he’s disappointed that they now need to postpone their trip. He leaves the party knowing that Marcus’ first allegiance is to Deborah and not to him.

Deborah finally opens Ava’s gift, and it’s her TIME magazine cover, framed. The cover asks: “Will Deborah Vance make history?” A note from Ava reads: “I think she will. XOXO, Ava.” When she takes the stage, she tells the crowd that she has told many of the same jokes throughout her time on the Palmetto stage. But tonight, she’s going to tell them why she told those jokes.

Ava’s dad passes away, and at the funeral, the crowd is mum until a voice booms from the back and Deborah emerges. She says she knows the deceased must’ve been a special person to raise someone like Ava. She works the crowd, getting members of the family to open up and share humorous stories of the man they lost. The mood soon lifts. 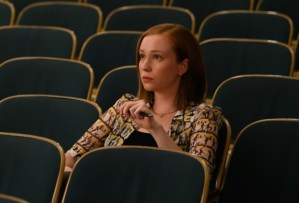 Back at her parents’ house, Ava thanks Deborah for making her mom laugh, and the two women have a heart-to-heart. Ava confesses that she’s done with comedy, but Deborah says she can’t quit because she’s too good. That little praise causes Ava to finally break down, causing the comedian to joke that crying gives you wrinkles.

Ava asks about the show. Deborah did do the new material, but she totally bombed. “Oh no! Did you come all the way here to bury me with my dad?” Ava asks. But it turns out Deborah loved it. Pieces of the routine worked, but she needs to work it out on the road… and she wants Ava to join her. She sincerely apologizes for hitting Ava and, after promising to never do it again, the ladies shake hands.

The next morning, the women board a private jet to fly back to Vegas, as Jimmy rings Ava. He received a call from the British writers’ agent about a “very intense and revealing” email she sent about Deborah. “What the f–k did you do, Ava?” he asks. And on that note, we’ll have to wait for Season 2 (yes, it’s renewed!) to witness the sure-to-be juicy fallout.

Will the women be able to move past this indiscretion? Will the tour still go on? Grade the finale and season below, then sound off in the Comments!