One of the most difficult things about microaggressions is explaining the pain they cause. Trying to do so as a kid is even harder.

But in Friday’s installment of the beloved father/daughter comedy Sydney to the Max (Disney Channel, 8:25/7:25c), the title character and her friends have to do just that when their well-intentioned white teacher Ms. Anderson assigns them historical figures to research for a class assignment based on their race. For instance, Sydney gets assigned the late Georgia Congressman and activist John Lewis.

In the secondary story, Young Max (Jackson Dollinger) is misidentified in a newspaper article as the president of the computer club because he is white, but Young Leo (Christian J. Simon), who is Black, is the actual founder and president. 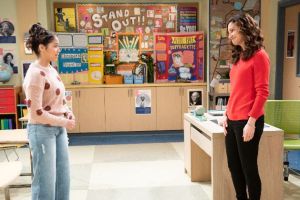 “Before we even started Season 3, I talked with writer/creator Mark [Reisman] and some of the producers on all the topics that we were going to talk about, which are so incredible,” Ruth Righi, who stars as Sydney, says during a recent Zoom panel for the episode titled “Do the Write Thing.”

“I just feel really appreciative that our show is an outlet for normalizing these topics because they happen,” Righi continues. (In an April episode, the show tackled the empowering but sometimes isolating identity associated with Black hair.) “And it’s just important for kids to be able to see it and talk about it with their families and just have a relatable source to now learn from in this fun, loving fashion.”

Raven’s Home star and EP Raven-Symone directed the episode, written by Patrice Asuncion and Nick Rossitto. “I thought it was amazing that the producers really fought to make this show happen,” Symone says of the installment. “A show [like this] can be such a heavy topic on the Disney Channel. They wrote it in such a way that it’s palatable. It can touch the audience in a very clear way.”

“I was very excited to know that they were going to allow me to do it,” Symone adds. “One of my favorite episodes is when Ruth had her whole hair situation going on. If you had a white guy directing this, you’d start another kind of microaggression. Black females. Let’s go.”

Julia Garcia, who costars as Emmy, says the episode also made her feel seen, and the writers even worked in some instances from her real life, including her racial background. 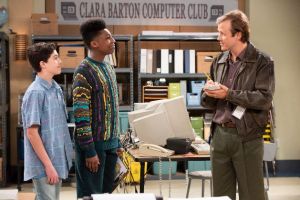 “Being Cuban and Filipino in California, everybody thinks you’re Mexican,” Garcia says. “So there are definitely a lot of stereotypes that people say to me, and it’s hard to come back from, especially when some relationships are ruined from that. And you can’t come back from that. You get to learn over time who your real friends are and which people will be there for you. And I think these guys right here are here for me.”

Simon, who plays Young Leo, agrees. “The fact that we’re talking about these issues on Disney Channel is huge,” he says. “You don’t have to do it alone. There are so many people around you who want to help. You just have to ask, and don’t be afraid to use your voice.”

“I’m happy about this episode because most people who are watching this episode won’t even know what a microaggression is,” he concludes. “The episode does a great job of letting people know. And some people do it, and they don’t realize the negative impact that they’re having on the person.”