Racial identity has never been a big deal on Sydney to the Max.

Sure, the title character Sydney (Happy!‘s Ruth Righi) has a white father and a Black mother, but race is never addressed on the Disney Channel series. So when the showrunner and writers behind the tween sitcom decided to comb through Sydney’s very personal Black hair journey in an upcoming installment titled “The Hair Switch Project” (airing Friday at 8:25/7:25c), it had to feel organic.

“In the writers’ room, we really wanted to explore Sydney’s Black identity,” Kourtney Richard, the staff scribe who wrote the episode, tells TVLine. “She’s biracial and she has this Black side, but she lives with the white side of her family. We had to figure out how to get into it.”

But Sydney’s mom is deceased and her Grandma Maya (mixed-ish‘s Carlease Burke) lives in Washington D.C. This meant Richard and company had to create a character and a scenario where Sydney would want to learn more about her unique tendrils, the texture and how it affects her identity. Jada (The Unicorn‘s Princess K. Mapp), a Black classmate, lab partner and science study buddy, sparks the topic when she curiously asks Sydney why she always flatirons her hair, especially because in one instance, it made her late.

“I named the character after my sister,” Richard reveals. “And Jada is there in large part because this conversation could not come from a white person. Sydney’s world, from her dad and grandmother to her friends and crushes, is all white.” 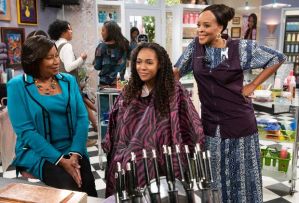 “We knew Grandma Maya wasn’t going to fly all the way from D.C. just to ask about her grandchild’s hair habits,” she adds. (Grandma Maya does visit eventually and takes Sydney to a Black stylist.) “That didn’t feel realistic. We added a Black character who wears her natural hair and who, without judgement, asks Sydney a simple question about wearing her hair in its natural state and being ‘Black Girl Magic Cute.'”

Because Sydney’s hair texture is different from that of other Black girls, the writers also decided to explore the hair journeys of young Alisha (played by Cassidey Fralin) and Grandma Maya in a 1990s flashback.

“My hair is more like Alisha’s so I can appreciate her story,” Richard shares, adding that she stopped getting relaxers in the 8th grade. “That’s why there’s an A story and a B story, which worked perfectly and allowed us to explore different perspectives, but ultimately come into the theme of celebrating Black hair.”

“Mark really backed me on this so I could take the lead and tell the story in the most authentic way possible,” she adds. “And I couldn’t have asked for a better director than Morenike. As Black girls, we have similar stories, and Mark allowed us to take charge, and I appreciate that. When white middle aged men and women write our stories, you can tell the difference.”

Evans agrees and says this is one of the reasons she knew she had to direct this special installment of Sydney to the Max.

“I read the script and I knew it was for me,” says Evans, the mother of two. “Being able to tell our stories really moves me. I’m passionate about Black culture. It’s really what drives me, and I don’t get to do that all the time. I have a daughter and a son, and it’s just so important for them and the little girl in me.” 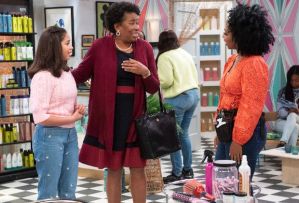 “I was determined to make something I could be proud of and something that could resonate with people,” Evans adds. “While it’s specific to Sydney, it’s also a universal journey of embracing who you really are.”

Now that Sydney is exploring her Black culture, viewers will see her do so again, Richard and Evans say.

“This is not a one-off,” Evans says. “The intention is for Sydney to keep examining her cultural heritage, and she’s going to be rocking new hairstyles even when the episodes are not about Black hair.”