Never discount the ability of subpar white guys to fail up.

That’s the takeaway from this week’s Handmaid’s Tale, in which Fred Waterford weasels his way out of international criminal charges and incites a blind, violent rage in his former handmaid — which is saying something, given their history.

In other news, June and Luke now have a man on the inside who’s willing to help them with intel on Hannah… and that man happens to be Nick.

Read on for the highlights of “Progress.”

WORKING THE PHONES | We pick up with June and Luke taking long, fraught looks at each other after she’s just finished telling him about the last time she saw Hannah. She apologizes again for not being able to extricate their daughter from Gilead, but he quickly says it’s not her fault. But when she mentions that Hannah is “home” now, he objects: “Home is here. Home is with us.” He says they have to find her, but June isn’t hopeful… until she sees the not-insignificant amount of information he’s gathered on Hannah so far. “There’s not a day that went by that I shouldn’t have done more,” he laments.

With Tuello’s help, they place a call to Commander Lawrence. “You must want something,” he correctly surmises. He points out that the home in which Hannah is growing up is the only one she remembers, and they should leave her there. “Your love f–ks people up,” he observes. “You’re a fountain of heartache and trouble.” He also tells her that Janine is alive and back at the Red Center with Aunt Lydia, which brings June to tears.

Eventually, Lawrence offers to help get Hannah back if June will negotiate… say, return 10 of the children she put on that flight? “You know we’re never giving those children back,” she says, realizing that he’s not going to help her. But still, she presses on, telling Lawrence, “We love her. We are her family. Joseph, I know you are a good man.” That affects him, we see, but he doesn’t waiver: He tells her to be grateful for being free and to move on. “If you can,” he adds after they hang up. 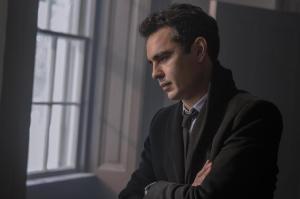 IN THE NICK OF TIME | So Luke suggests a different angle: Nick. “I think he would do anything for me and Nichole, yeah,” June says, clearly surprised that her husband is behind the idea of contacting her baby daddy. And then she’s really taken aback when Nick says that it’s safer for her to bring Nichole and meet up with Nick in person, rather than make another call to Gilead. To be clear, Luke does NOT love the idea of this rendezvous, but he knows it’s their best hope of finding Hannah. So she agrees, adding that they have to try everything “for Hannah.”

With Secret Service agents in the car behind her, June drives to an empty school in the middle of nowhere to see Nick. “Freedom agrees with you,” he says as June beams, then kneels down to see their daughter in her stroller. “She’s a whole different person,” he remarks. They go inside to talk, but before June can even make her request for information about Hannah, Nick is producing a folder of everything he’s been able to find. (Side note: I admit, I got a little heart-eyes-emoji at this point in the hour.)

Hannah is living in Colorado Springs, and there are current photos of her going about her daily life. “Getting her out is impossible,” Nick warns. “There are Guardians everywhere.” But at least they know where she is, “and I’m here,” he promises, “to do what I can.” June marvels at how much he’s risked to help her. “I should have run away with you when I had the chance,” he says, and they kiss but then mostly just rest their foreheads against each other and cry softly. Then Nick gives Nichole a doll and they both make silly noises at the baby for the few minutes they’ve got left.

“Try and be happy,” he tells her, holding her close outside moments before they have to part. “You, too,” she says. And after she’s back in her car, he takes a wedding band out of his pocket and slips it back on his finger. As she drives home, June grins and cries and is a big ball of (understandably stirred-up) emotion. 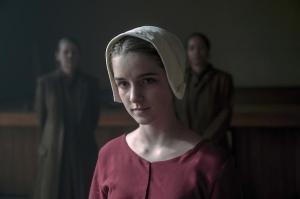 ESTHER RESURFACES | We mentioned Janine before, so let’s check in there. She’s shocked when she sees Esther Keyes as a handmaid in the Red Center, being punished for refusing to eat. Janine meekly steps in to prevent Aunt Lydia from torturing the girl, suggesting that she can maybe get her to comply. Esther is very interested in what June is up to, but Janine hardens her voice as she tells the girl (and herself, probably), “Forget June. She’s not here. We’re here. And you have to take care of yourself now.” She points out that Gilead will not kill Esther but will make her wish she were dead. “You need to stay alive so you can be here when things get better,” Janine adds. And eventually, her message gets through. Esther eats, Aunt Lydia is pleased and no one had to lose an eye this time.

‘THOUGHTS AND PRAYERS’ | At the detention center in Toronto, Fred and Serena open baby gifts — including an infant-sized Commander’s suit, ick — from their fervent fans. When he tells her to read a card they’ve received, she gives him a pointed look. “Am I allowed now? Now that nobody’s watching?” He says he’s made mistakes but he wants to start over, it’s all God’s plan, yadda yadda. In fact, he thinks she should write another book, because “The world should hear your voice again.” 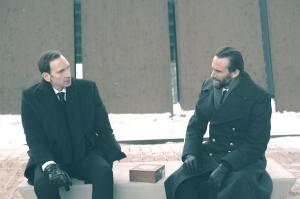 The Waterfords are surprised when Warren and Naomi Putnam arrive for a visit. Naomi gives a little side-eye to the pad where Serena has been making notes, but says nothing about it. That’s probably because she’s really there to push her agenda: She wants Serena’s baby son to come live with her in Gilead if/when Serena is not able to care for him herself. Meanwhile, Warren commends Fred for being a good little Christian soldier during his time in Canada. But when Fred asks what Gilead is doing to get him out, Warren’s all, “What now?” Turns out, there’s zero political will to stage a “Free the Waterfords” campaign, lest doing so encourage more kidnappings. In fact, all Commander Putnam can offer is a box of cigars and the assurance that “we will continue to send you our thoughts and prayers,” which is said with the straightest of faces and therefore is the funniest line in the episode.

Later, in the chapel, Serena worries that their child will become a ward of the state and that she will be sent to the Colonies or forced to be a handmaid. Fred promises her that won’t happen and that eh will do “everything in my power” to protect their child. “What power?” she asks. “What could you possibly do from in here?” Fred tells her to have faith — and we’ll find out why in a moment.

A FLOP FLIPS | When June comes home with Nichole, Luke and Moira cry and laugh as they look over everything Nick has gathered. Tuello is there, too, and he reluctantly says that they have a new asset in Toronto: Fred Waterford. “He has agreed to share his wealth of knowledge, inside information about Gilead” and all that good stuff in exchange for his freedom: The prosecution as dropped its charges. Moira and Luke can’t believe that the United States made a deal with Fred, but June quietly lays it out: Her testimony spooked him, and Tuello used that fear to flip Fred. “Sometimes, you have to let one fish go to catch a lot of other, bigger fish,” he says sheepishly.

Tuello leaves, and something in June’s face makes Luke start calling for her and running after her as she follows. He’s nearly at his car when she explodes. “That man is a f–king rapist!” she screams over and over, lunging at Tuello. “I will kill you!” she promises, furious — and if it weren’t for the intervention of Luke and the Secret Service agents, I think she might.