So much for glorious purpose.

Disney+’s much-anticipated Loki series made its debut on Wednesday morning, answering the question of where Tom Hiddleston’s Marvel Cinematic Universe character journeyed off to after grabbing the Tesseract in Avengers: Endgame. But the revelations unveiled to Loki in Episode 1 — like, uh, he might not have any control over his own life! — might have him regretting his swipe of that pesky blue cube.

How Disney+ TV Series Have Changed the MCU

Before you give us your thoughts on Loki’s premiere, let’s recap what went down in the episode:

The shenanigans begin with that same Endgame scene — New York City, 2012, Loki takes the Tesseract and goes poof! — and we’re transported to the Gobi Desert, where the God of Mischief has crash-landed. Within moments, two new portals materialize near Loki, and a quartet of people in S.W.A.T.-like gear — including Wunmi Mosaku (Lovecraft Country) as Hunter B-15 — approach the Tesseract, with B-15 observing that they’ve got a “standard sequence violation” on their hands. And much to Loki’s confusion, B-15 suddenly places him under arrest “for crimes against the sacred timeline.”

Naturally, Loki sees these people as zero threat and tries to move past them toward the Tesseract — but he’s halted when B-15 strikes him in the face with her time stick, causing him to move at 1/16th speed while feeling all the pain of that hit in real time. Loki falls to the ground, he’s taken into custody, the armored men seize the Tesseract, and they reset the aggravated timeline by setting down what looks like a mini-lantern, which fills with purple smoke and appears to wipe away any evidence that Loki had ever touched down in the desert.

As noted in my colleague Matt Mitovich’s review of Loki, the premiere is a bit heavy on exposition, particularly once Loki’s arrested. So here’s a highlight reel of what he learns after he’s (literally) collared: He’s now in the custody of the Time Variance Authority, a bureaucratic organization, overseen by a mysterious trio called The Time Keepers, that exists to protect the sacred timeline — that is, the predetermined chain of events for everyone in existence. (Should that be disrupted, a multiverse could form, and we can’t have that.) 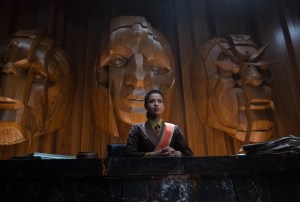 Loki, who became a “variant” after he messed with the timeline by grabbing the Tesseract, now must stand trial for his offenses and (hopefully!) get back on his preordained path once he’s exonerated. Upon arriving at the TVA, there’s a lot of Loki trying to use his powers and intimidate the TVA employees, which essentially never works, but you’ve gotta admire his spirit.

Despite Loki’s best efforts to blame all this timeline chaos on the Avengers and their timey-wimey pursuit of the Infinity Stones, Judge Ravonna Renslayer (The Morning Show’s Gugu Mbatha-Raw) finds Loki to be the guilty party here. But just before he can be “reset” — whatever that seemingly horrible fate is — Loki’s saved at the last minute by TVA Agent Mobius (Owen Wilson), who’s been busy investigating a string of crimes committed by a particularly dangerous variant who’s causing destruction all over the timeline.

“If you’re thinking what I think you’re thinking, it’s a bad idea,” Renslayer tells Mobius, who’s attempting to intercept Loki’s imminent reset. “I’m just chasing a hunch,” he replies, and she warns, “Anything goes sideways, it’s on you.” And with that, Loki becomes Mobius’ problem, and Mobius hints that he can help Loki get out of the TVA if Loki assists him with some things.

It isn’t until the end of the episode that Loki’s new, glorious-ish purpose at the TVA is divulged; in the meantime, Mobius questions him about whether he enjoys bringing pain to others (Loki insists he’s a liberator, not a murderer), and Loki’s also forced to watch a film reel of his life — including moments that haven’t happened yet, like the death of Thor and Loki’s mother, Frigga. Later, he also watches Odin’s death, his own brotherly bonding with Thor, and his eventual demise at Thanos’ hand, and the idea that his entire existence is at the mercy of the sacred timeline seems to sit… not super well. (Oh, and the mysterious real-life plane hijacker known as D.B. Cooper? That was Loki all along; get more scoop on the scene here.) 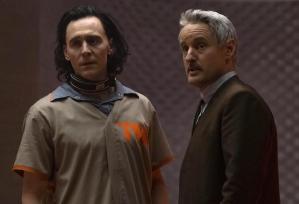 Finally, after an ill-fated escape attempt — and Loki’s fairly stunning discovery that the TVA possesses multiple Infinity Stones, which are powerless in this realm and mostly used as paperweights — Mobius cuts to the chase: “A fugitive variant has been killing our minutemen,” he tells Loki, who responds, “And you need the God of Mischief to help you stop him.”

And why Loki? Well, it’s simple: “The variant we’re hunting is… you,” Mobius replies.

The premiere ends in Salina, Oklahoma, circa 1858. A portal opens, and TVA hunters step through it. They plan to “prune” the scene — that is, clip this new branch of the timeline so that it never even happened — but then they spot a hooded figure in the distance. The figure drops a lantern, and the entire field is set ablaze, torching several of the hunters. One of them manages to avoid the flames, but before he can reach his device that will reset the timeline, the hooded villain stops the man, swipes his reset device, and stands ominously in the fire.

OK, your turn! What did you think of Loki‘s first episode? Grade it in our poll below, then drop a comment with your complete reviews!