Whoa. The Haves and the Have Nots dialed the crazy up to 11 in the second of its final eight episodes Tuesday. Not only did we learn the victor in the Hanna/Veronica smackdown that had been such a long time coming, the queen of mean exacted brutal vengeance on someone who’d dared to give her lip, and Tanner dropped a whopper of a lie on the object of his late brother’s obsession. Once you’re safely strapped in, read on; it’s recap time!

‘NO ONE HITS ME AND GETS AWAY WITH IT’ | Picking up where the midseason premiere left off (read the full recap here), Hanna opened a can of whupass on Veronica, then another and another, eventually knocking the she-monster right off her stilettos. “You are dead!” hissed the villainess. In response, Hanna uttered two words that spoke loudly and clearly to how scared she wasn’t: “Girl, bye!” When Veronica suggested that Hanna had lost her mind, Katheryn’s executor shot back that the bitch had just lost her $54M loan. “Foreclose on all that s—t now,” Hanna told Don in a quick phone call. “Done.” As she “showed out” Veronica, who warned, “Prepare for war, Miss Hanna!” the cops arrived along with David and Jim, who refused to speak with his pal’s ex. “But you’ll have me killed, won’t you?” Honestly, Veronica, who wouldn’t? As for Hanna, she wouldn’t talk to Jim, either. “What the hell is wrong with these women?” he muttered. Um, they’ve met you, Jim?

Meanwhile, Candace played third wheel on Benny’s date with Rianna. Oh, right, it wasn’t technically a date, the realtor was actually showing him a cute house. During a moment alone, Candace called the airline and learned that she was on the no-fly list. In a subsequent call, Landon offered to get her back in the friendly skies in a matter of four days if only she’d do one interview for him. “Have you seen all the press?” he exclaimed. “They’re changing their mind about you.” A breath after Candace almost slipped and admitted that she’d been in love with Charles, she quickly disconnected their call. Stupid feelings! Rejoined by Benny and Rianna, Candace haggled on the sale price and closing date, then cringed when her brother said that he’d only take the house if his realtor had dinner with him. Pass, she said. She never mixed business and pleasure. So Candace negotiated that deal, too, arranging for Benny and Rianna to meet at a restaurant to sign the paperwork. 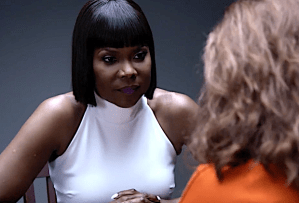 ‘THERE WAS HARM, AND THERE WAS FOUL’ | Desperate to hold onto her fortune, Veronica paid a visit to jailbird Katheryn, who didn’t give a rat’s ass that Hanna was calling in the loan. If Veronica didn’t have the money, Katheryn suggested, “Why don’t you get on the floor, snake, and slither on over to her and beg her?” Instead, Veronica pointed out that as a witness for the prosecution, she had immunity. With it, she could get Katheryn sprung by claiming that she herself had killed Jennifer; since the schemer had immunity, the authorities wouldn’t be able to touch her. But Katheryn refused to let the $54M loan stand, she’d just reduce it to $44M. Uh-uh, it was all or nothing, Veronica said. “Then it’s no deal.” Bonkers negotiating tactics, people; nobody got what they wanted. As Veronica was leaving, Katheryn snarked, “You really shouldn’t wear that wig anymore. You look like a man.” Giving, as always, as good as she got, Veronica fired back, “Honey I know you don’t have any mirrors in here, but you can’t talk about the way people look — trust me.” 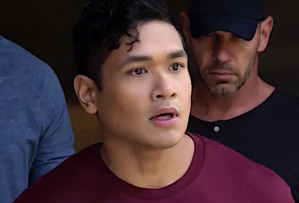 Later, Veronica’s busy day continued as she lured Colby to her house so that Tanner and a whole pack of thugs could kick the crap out of him. Afterwards, Colby was as defiant as ever — at first. Then he realized that he’d been kicked with spiked boots and cleats. No bueno. But he still had enough fight in him to suggest that revenge like this wasn’t really about Colby, it was about Tanner, who he guessed was as gay as his brother. No sooner had Tanner knocked out Colby than his main goon got a text about Justin, and off they ran to the hospital. What about Colby? “Somebody,” Veronica hollered, “needs to clean this s—t up.” Back at the Cryer Mansion, Jim deduced that Veronica had to have been looking for the papers that tied Katheryn to the murder weapon. If Veronica found them, they’d all be done for. So, Jim said, why didn’t David go sweet-talk Hanna for intel? Jim could tell that David liked her. That was OK. “Go on, bang her, and get the information while you’re at it.” Classy as ever, Jim. 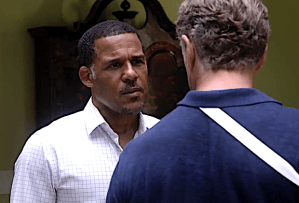 ‘OH, WHATEVER’ | Mind you, the only banging that was going to go on between David and Hanna was possibly her banging her fist against his face. “I will hit you again,” she threatened. “Step back.” She was no more going to give him any information than she was going to cut him any slack. She had no time whatsoever for that trifling man and his soft eyes. As the episode drew to a close, Jeffrey found Tanner and Pearl at the morgue. “Don’t you ‘hi’ me!” Justin’s mother spat. She blamed him for what had become of her late son. Tanner, on the other hand, weirdly played nice with Jeffrey, passing himself off as Justin’s confidant. The homophobe even wanted to bring Jeffrey something that Justin would’ve wanted him to have. (Ruh-roh.) Then, the sick bastard slipped into the conversation that Justin had been HIV-positive. Wait, what? “He told me you didn’t care ‘cause you were, too,” Tanner lied to Jeffrey. Oh, but if that wasn’t the case, gee… Jeffrey had better get tested. Justin “was hellbent on taking you with him one way or another.”

So, what did you think of Hanna’s smackdown of Veronica? Veronica’s violent revenge on Colby? (He can’t be dead, right?) Tanner’s lie? Hit the comments with your reactions — and who you think will/won’t survive the last episodes.