Warning: The following contains spoilers for the midseason premiere of The Haves and the Have Nots. If you haven’t watched yet, you might want to before reading on.

RIP, Officer Justin. Picking up where The Haves and the Have Nots’ midseason finale left off — with Jeffrey’s longtime stalker on fire — the premiere quickly, ahem, extinguished any hopes that he might survive. (Apparently, only Wyatt gets to cheat death over and over and over… )

In the wake of the most traumatizing cookout in history, Jeffrey declared that he couldn’t see Madison anymore, lest Mommie Dearest come after him, too. Madison wasn’t scared, though, and encouraged his boyfriend to fight back. They were still circling this potentially life-or-death dilemma when they returned to Madison’s place and were interrupted by Colby, who couldn’t help but remark that Jeffrey smelled like nasty barbecue. While Jeffrey excused himself to wash off the scent of flambéed stalker, Colby filled in Madison on the highlight of his day: going all Marine on a john who’d tried to stiff him. Upon learning that said john had killed himself that very evening, Colby, the model of compassion, called out to Jeffrey, “I’m sorry that bitch burned herself up — extra crispy.” (Ya know, if it weren’t for Veronica’s raging homophobia, I could see Colby getting along swimmingly with the she-devil.) 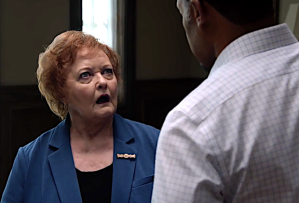 ‘I’D BETTER LEAVE BEFORE I’M IN A DRIVE-BY’ | The following day, Justin’s mother arrived early for a meeting with Jeffrey at David’s. Quickly, the judge ascertained that her understanding of what had transpired between their sons was very different from reality. In Pearl’s account of their history, Jeffrey had “lured Justin into unnatural ways” by doing “those devilish things they do to good, God-fearing people.” Honestly, she could hardly have made it sound more fun, could she? David attempted to set her straight — pictured is her “subdued” reaction — but her head was as hard as his fancy marble floor. Eventually, she was huffing and puffing her way toward the exit when at last Jeffrey and Madison arrived and broke it to her that Justin was really, most sincerely dead.

Meanwhile, Mitch ran into Hanna at the Cryers’ just long enough to get frostbite from her “warm” reception. After she left on an errand — she has a lotta those, ya know — he played 20 questions with Jim in such a way that neither Jim nor we could be sure whether he was asking questions or making statements. In the end, Mitch wound up vaguely threatening Wyatt, and Jim warned that the Malones wouldn’t be too thrilled to learn that they’d been robbed by a member of their own family. Once they were done “playing chicken with an 18-wheeler,” as Jim put it, he rushed off to see David, who gave only the faintest notion that he was hatching a plot and really just wanted to go back to reading his damn book. 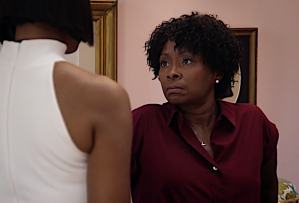 ‘WHEN WAS THE LAST TIME A WOMAN PUNCHED YOU IN THE NUTS?’ | In other developments, Landon warned Charles that he didn’t trust Conley, period, never mind with an open bottle. And at the hospital, Wyatt tried and failed to charm a nurse into uncuffing him so that he could use the bathroom. He also wanted a pain pill. And if she’d stayed any longer, he’d have probably wanted a mint on his pillow, too; he’s needy that way. After Hanna returned to the Cryers’, Katheryn called and asked her first to check on Wyatt, then to pay a visit to the “someone very special” that she had stashed at her son’s loft. “The keys are on my key ring,” added the jailbird as if her confidante wouldn’t, say, knock on the door instead of just let herself in. Before she could leave on her errands — more errands! — in walked Veronica looking for Jim. Since he wasn’t home, Hanna tried to kick out Veronica so that she could lock up. Veronica wasn’t having it, of course, and did what comes naturally: antagonize the individual in front of her.

“You’re wearing your hair natural now,” noted the queen of mean. “It fits all the ‘maiding’ you do.” When Veronica started up the stairs, Hanna threatened to drag her ass back down. Veronica would love that, she said. Then she could sue. “Of course, all I would get,” she added, “is a mop and a bucket.” Giving as good as she took, Hanna spat, “Well, you apparently already have a broom.” After Veronica made her way upstairs and started going through Katheryn’s bureau, Hanna called the police. Upon completing her call, Hanna got in the wicked witch’s face and went so far as to slam her hand in the drawer to get her to withdraw it. One thing quickly led to another, and as the episode drew to a close, the women were engaged in a full-on catfight! So, what did you think of the beginning of the end of The Haves and the Have Nots? Grade the hour in the poll below, then hit the comments with the plot twists you’re hoping to see in these final episodes.