Getting out of the limo with a wacky costume or gimmick is a staple of the Bachelor franchise, but it rarely leads to lasting romance. With self-described “crazy cat lady” Katie as the new Bachelorette, though, that might all be about to change.

Monday’s premiere kicks off with a preview of the season to come, with lots of shirtless men and Katie asking, “Can someone just tell me when fantasy suites are, please?” There’s drama on tap, too, of course, with one guy calling another guy a “manipulative psychopath” and Katie tearfully telling the men: “If you’re not here for an engagement, get the f—k out.” We first met Katie during Matt James’ Bachelor season, and now she’s the one handing out the roses. She tells us about her tough childhood — her parents divorced when she was a baby, and she grew up poor and moved around a lot as a kid — and declares: “I am ready for that love that I deserve.” She’ll find it at the Hyatt Regency Tamaya Resort & Spa in New Mexico… which looks like a big step up from the roadside motel the producers stuck Clare and Tayshia with last season, we have to say. 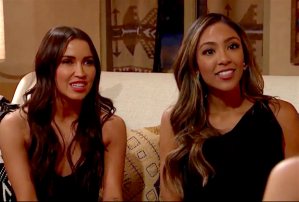 Speaking of Tayshia, she and fellow former Bachelorette Kaitlyn are subbing in for Chris Harrison as hosts this season, and they ride up to the resort together in an old convertible like they’re Thelma and Louise. First, though, we meet some of Katie’s men in a montage: Connor B., a quirky math teacher who plays ukulele in the bathtub, is giving off serious Andy Bernard vibes. (Did he go to Cornell?) Brendan is a former hockey player from Canada who’s now a firefighter in training, Mike is a gym owner and a virgin, and Tre brags that he knows “40 digits of pi.” OK, then! Before the limos pull up, Kaitlyn and Tayshia give Katie a pep talk, and she announces that “I need a grown-ass man.” Um… would you settle for a grown man in a cat costume?

The guys start arriving, and Katie is blown away by how good-looking they all are: “They’re all really tens.” Tre, the pi guy, arrives in a pickup truck with a ball pit in the back, and she likes his fun-loving vibe. After meeting Greg, she realizes, “He looks like my ex-boyfriend. I don’t know if that’s good or bad.” (We’ll soon find out!) Andrew S. tries to fake his way through a British accent, but they laugh it off together. Jeff shows up in a Winnebago… which he lives in. A guy shows up in a gift-wrapped box and won’t come out, telling Katie she has to unwrap him later. Cody brings along a blow-up doll named Sandy who “helped me through a lot” during the pandemic. Actually, lots of sexual innuendo is exchanged, and after Quartney’s speech gets Katie hot and bothered, she even humps the air. But she’s most impressed when Connor B. — the Andy Bernard clone — shows up in a full cat costume, with drawn-on whiskers and everything. “I think I’m in love,” she says to him right away, and when Kaitlyn and Tayshia check in on her, she confesses: “I’m really focused on Connor the cat.” See? Sometimes the wacky costumes do work. 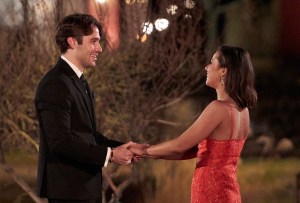 She goes inside to spend more time with the guys, and she hits it off with some of them right away. Greg charms her by giving her a pasta necklace made by his niece, she joins Tre in the pickup truck ball pit for some fun bonding, and Justin — who painted her a bunch of roses in a heart shape — gets the season’s first kiss. But others stumble: Jeff gives Katie the grand tour of his Winnebago, and “it was definitely lived-in,” she reports. Then it’s finally time for the unboxing: She opens the gift-wrapped box, and she likes what she finds inside. His name is James, and Katie thinks he’s “super hot… I definitely have a crush on him.” She also spends some quality time with Connor the Cat Guy, donning her own cat ears and paws to play on a Big-style giant piano with him. They gush over each other before making out — and he gets his whiskers all over her.

Katie hands out her first impression rose, though, to Greg, and they share some kisses. (Guess she doesn’t mind that he reminds her of her ex.) At the rose ceremony, she hands roses to Tre, Connor the Cat Guy, Andrew S., James the Box Guy, Justin, Quartney, Mike the virgin… and a bunch of others who kind of all blend in together, honestly. (Jeff the Winnebago Guy, meanwhile, is among those who get kicked to the curb.) As the remaining men share a toast with Katie, she admits: “I don’t have a Top 2 right now. I have a Top 22.” And the premiere ends with a second trailer that includes Katie and Greg making out in a rainstorm, her whispering “I love you” to Andrew S. (!), Blake M. from Clare and Katie’s season showing up for another shot at love (!!), the requisite ambulance and man tears — and Katie angrily declaring, “I am done, I am done, I am done. Someone book my f–king flight home.” Will she need a cat carrier, though?

Alright, Bachelor Nation: Vote in our very early poll on who Katie’s final rose might go to, and then hit the comments to share your post-premiere thoughts.