If you still haven’t watched HBO Max’s Friends reunion yet, you’ve clearly been living under a rock — or perhaps under Ugly Naked Guy’s trampoline. No judgment.

The long-awaited special, which brought together all six of the show’s stars — Jennifer Aniston, Courteney Cox, Lisa Kudrow, Matt LeBlanc, Matthew Perry, David Schwimmer — for one of the first times in 17 years, instantly became the streaming event of the season when it premiered on Thursday, sending fans into a nostalgia-fueled tizzy on social media.

That said, the reunion was also far from perfect. Key topics went undiscussed, fan-favorite characters went unmentioned, and a whole lot of attention was paid to people who weren’t even remotely part of the show.

To that end, here are 20 questions we’re left with after watching Friends: The Reunion…

1 | How much more would they have had to pay each of the six actors to recreate the opening title sequence in the fountain?

2 | Did LeBlanc purposely reference the series finale when he asked if the walls in Monica and Chandler’s apartment were always purple?

3 | During the casting segment, wouldn’t it have been more interesting if the producers named the actors who were almost cast in each role? 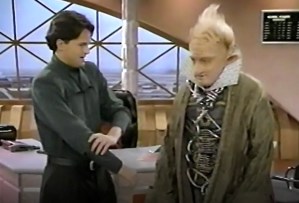 6 | Wasn’t Ross and Rachel’s first kiss technically in Season 1’s “The One With the East German Laundry Detergent”?

7 | Were any of the other cast members aware that Thomas Lennon — aka Joey’s Identical Hand Twin — costarred opposite Perry in CBS’ Odd Couple reboot? Why did no one address that?

8 | Were you also surprised to discover that Larry Hankin, the actor who played Mr. Heckles, is still alive?

9 | If Richard was retiring, would he really have invited ex-girlfriend Monica, her husband Chandler and all of their friends to his retirement party? 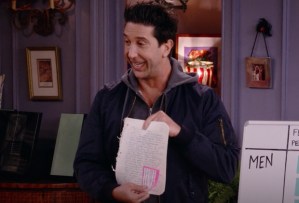 10 | Which Easter egg did you most enjoy? Was it Chandler’s laptop (from Season 2’s “The One With Barry and Mindy’s Wedding”)? The letter Rachel wrote for Ross (in Season 4’s “The One With the Jellyfish”)?

11 | Rather than share their favorite episodes, wouldn’t you have preferred to hear which episodes of Friends the cast didn’t like?

12 | Of the many cast members we didn’t see in the reunion — Paul Rudd, Hank Azaria, Cole Sprouse, etc. — whose absence disappointed you the most? (Couldn’t one of them have modeled Spudnik in the fashion show, rather than Justin Bieber?) 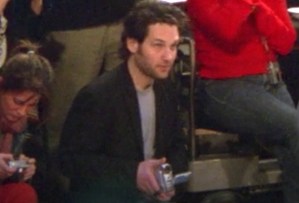 13 | Speaking of Rudd, did anyone else spot the Artist Formerly Known as Crapbag crouched down, filming the cast’s final bows during the series finale?

14 | Were you surprised that Kudrow appeared to play guitar better than Lady Gaga, considering Kudrow has famously spoken about barely learning a few chords for the show?

15 | Is Joey still considered canon? The spinoff — which saw Joey move to Los Angeles to further his acting career — wasn’t mentioned during the reunion, but when asked where his character would be today, LeBlanc predicted he would’ve opened a sandwich shop in Venice Beach.

16 | Is it too much to ask for another documentary-style special with more never-before-seen, behind-the-scenes footage? (That was the best part!)

17 | Where do we get the orchestral version of “I’ll Be There for You” that played during the closing montage?

18 | For the first hour and 42 minutes — before Lisa Kudrow handed Matthew Perry a “COVID-tested” Kleenex — had you forgotten this special was filmed amid the pandemic? 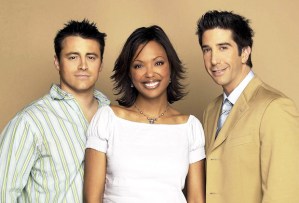 19 | Why did James Corden have to host? We know his company Fulwell 73 produced the special, but wouldn’t it have been better with someone connected to the original series — like Aisha Tyler, who has plenty of hosting experience of her own?

20 | Nostalgic, sure. But was Friends: The Reunion actually any good? Did it fully satisfy your expectations, or did it leave you wanting more?

Drop a comment with your answers to any of the above, along with your own lingering questions about the reunion, below.