The propeller-beanie’d Piglet bested his competition and took home the Golden Mask trophy in Wednesday’s season finale. Black Swan came in second, and Chameleon landed in third. But who were underneath the last three costumes? Read on for a quick recap. 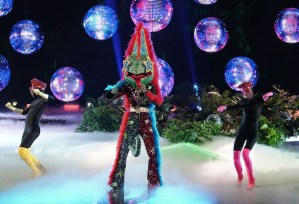 CHAMELEON | This episode was ultra-light on clues, but Chameleon managed to slip in a few. He mentioned his son and his sister’s memory, then he sang an on-point cover of “Gangsta’s Paradise” by Coolio Feat. L.V. — capping a season of nothing but hip-hop performances. (My guess: “Black and Yellow” rapper Wiz Khalifa.)

BLACK SWAN | Black Swan performed Michael Bolton’s “How Am I Supposed to Live Without You” without a hint of the stage fright she said has haunted her throughout her career (and especially since she hasn’t performed live during the pandemic). As for clues, she said “I was known around the world before I got my driver’s license” and mentioned that she was scheduled to tour in 2020 but — like so many acts — had to cancel when COVID-19 hit. (My guess: “Too Little Too Late” singer Jojo.) 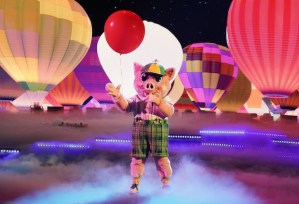 PIGLET | The porcine wonder chose Journey’s “Faithfully” for his final number, and he killed it. I’m also impressed he didn’t kill himself during an extensive bit of walking through the backstage area at the start of his performance. “I was one of the first people to open up my life to the public,” he said during the pre-song package. “It was before social media.” (My guess: 98 Degrees’ Nick Lachey.)

THE UNMASKINGS | Chameleon was Khalifa. Black Swan was Jojo. And Piglet was Lachey.

Now it’s your turn. What did you think about the finale and the season on the whole? Grade ’em both via the polls below, then hit the comments to expand upon your thoughts!