“My name is June Osborne, I am a citizen of the United States, and I seek asylum in the country of Canada.”

Blessed freakin’ be the fruit!

Forgive me if I’m a little excited, but this week’s Handmaid’s Tale chronicles June’s re-entry into regular society. And though her reacclimation is tough and tearful from the start, IT’S NOT IN GILEAD, so it’s cause for celebration.

Read on for the highlights of “Home.”

‘SHE WAS OUR HANNAH’ | As June steps off Oona’s boat, Mark Tuello is there as a representative of America to welcome her to Canada. After she officially declares that she’s seeking refuge in the Great White North, June eventually winds up in a hotel with Luke. She’s quiet and — as we see when she showers — so bruised. Luke orders a bunch of plates from room service but she doesn’t taste any of them before she curls up in a bathrobe and sleeps for 17 hours.

When she wakes, Luke is napping on the sofa nearby. She invites him to sit near her on the bed; the formality between them and the way they gingerly approach each other is heartbreaking.  He immediately launches into an apology. “June, I tried to get you out. I did. And I tried to find Hannah. I tried every day and I failed, and I’m sorry,” he says, adding that he understands if she can’t forgive him “because I can’t forgive me.” She starts to tell him about when she visited Hannah at the lake house, and when she says, “She was our Hannah,” it is Luke’s undoing. He kisses her, crying and reassuring her that she’s a good mother. She protests that she is not, flashing back to the last time she saw their daughter at the torture center. Important to note: June does not tell Luke about that interaction.

Later, when Tuello is debriefing June, Luke interrupts and says he’s going to take June home to see “our daughter.” Moira and Emily are at the house with Nicole and are so happy to see their friend free. Emily hands the baby to June, and Nichole cries. Then June cries and Emily cries, and this is a very soggy episode, indeed. Later, when they’re alone, June tells Nichole that “your daddy and I love you so much, your first daddy.” 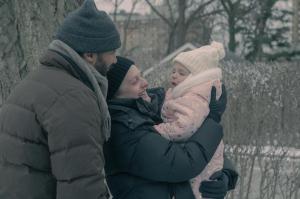 ‘DO YOU UNDERSTAND ME?!’ | At first, June seems to be doing OK. She asks to accompany Moira and Luke on a food run. She invites Rita and Emily over for dinner. But at the grocery store, seeing a few women in hijab triggers a panic attack (their head coverings remind her of the one she wore) and June winds up gasping for air in the potato-chip aisle. After dinner that night, Emily tells the ladies that she still hasn’t moved back into the bedroom with Sylvia, and Moira concedes that “we all left that place totally f–ked up about sex.” June wonders if any of them ever wonder if they deserve to be free of Gilead, but Moira quickly says they did what they had to do to survive, and “We’re here, ladies.”

When June asks about Serena, the group gets quiet quickly. Eventually, Rita drops the bomb that she’s seen Mrs. Waterford and that she is pregnant. “Is it his? Is it the commmander’s?” June asks, and Rita replies in the affirmative. “Well, f–k her. I don’t care,” June says airily. But you know she really, really does.

And that’s why she calls Tuello late that night and has him bring her to her former mistress. The minute June walks into her room, Serena is back on her blessed-BS. “I prayed for this chance, and I humbly thank the Lord for your visit,” she says. “You would,” June snarks. “You never did give me credit for anything.” Then Tuello leaves them alone, and Serena mentions how she wants to make amends, and something inside June is UNLEASHED.

“I brought myself here so I could tell you how much I hate you,” she says. “You don’t deserve to make amends to anyone. The only thing that you deserve is a life full of suffering and shame. You have destroyed my life, my family, my friends, my country and my child. There is no one less worthy of redemption than you.”

This last bit makes Serena cry; she gets down on her knees. But June is not done. “Do you know why God made you pregnant? So that when he kills that baby inside your womb, you will feel a fraction of the pain that you caused us when you tore our children from our arms,” she snarls. “Do you understand me? DO YOU UNDERSTAND ME??!?!?!?!??!?!” That last part is yelled, and Serena is sobbing, and wow that was satisfying in a way that is slightly disturbing.

At home, June climbs into bed and aggressively kisses Luke, straddling him in the process. He tries to touch her but she shoves his hand down, and when he asks her to wait a second, she puts her hand over his mouth and rides him until she has an orgasm… which means you can also file this scene under “satisfying (for June) but disturbing.”

The next day, Luke and June play with Nichole outside in the snow. At one point, Luke watches his wife like he doesn’t know who she is. 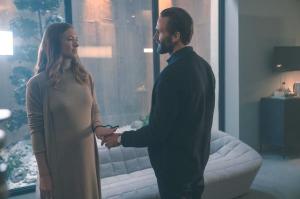 ‘RUN FOR YOUR LIFE’ | Let’s backtrack for a second. Early in the episode, Tuello tells Serena that getting Fred to cooperate more could help both her plight and Tuello’s investigation. But when the mom-to-be visits Fred, she rebuffs his desire to play daddy to the child growing in her belly. And he notes that June can put them both away for the maximum sentence possible, so maybe it’s time to table their fight “and team up to help each other.”

Though she certainly doesn’t seem open to the idea then, after June’s visit, Serena visits Fred’s cell and tells him she needs him. He kneels down to put his face near her belly… and isn’t it interesting that the audio from June’s conversation with Tuello about Serena plays over the scene? She says Mrs. Waterford is driven by hatred and rage, “and underneath that, there’s nothing but pure misery… and she’ll do anything not to feel that way, anything to feel OK.”

In short, June says: “If you feel yourself getting sucked in by her, run. Run for your life.”