The following contains spoilers from the NCIS Season 18 finale.

It wasn’t long ago that NCIS cast member Wilmer Valderrama alerted TVLine readers that the CBS drama’s Season 18 finale would be worthy of “major, major, major, major spoiler alerts,” adding that rather than DVR and watch later, “This is an episode you want to show up for.”

Torres’ portrayer went on to say that to make up for last year’s start-of-pandemic non-finale, this season would end with “a real, explosive finale” that is “unpredictable,” “badass” and a “really emotional, controversial type of episode.”

“There are things going on that the fans have been dying to see, and there are some answers they’ve been seeking,” he said in conclusion. “People are going to get answers to many of the questions.”

So, how true was all of the above? I’d say… quite? 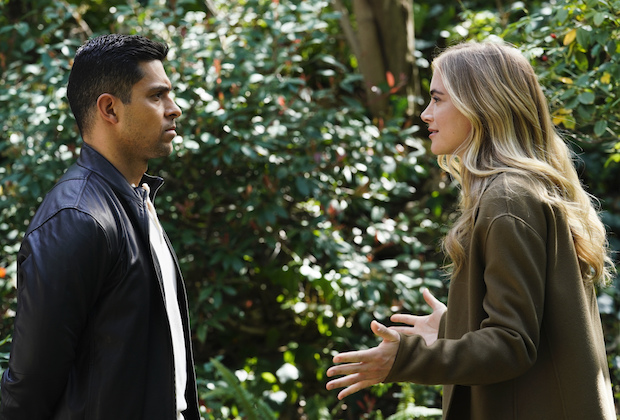 Much of the finale revolved around the hunt for some arms dealers, two of whom Bishop picked off with an oddly nifty, Lara Croft-like slide-across-the-floor move and precision aim. The search for the group’s leader, Flori, led McGee, Bishop and Torres to an abandoned house where they found, yes, guns, but also a classified NSA file.

Not long after, the NSA reported back to Vance that the leaker of said file was… Bishop, some 10 years ago. And while the accusation had the entire team up in arms, Ellie eventually confessed to Vance that she did leak the intel, opposed as she was to how the NSA was using innocent Syrian refugees to capture warlords. Or something.

Bishop attempted a vanishing act, but we soon realized that she was readying for an undercover op, on behalf of… Odette! The former CIA operative/Ziva’s onetime cohort revealed that Nick actually beat Ellie to the shed, where he grilled Ellie about her secrecy. As Nick had gleaned, Elllie planted the NSA file so as to blow up her career and go undercover — for what she expects to be “too long” a time — as a disgraced NCIS agent. When Nick asked how she could leave without saying a word, she countered, “Sometimes there is nothing to be said.” “This is not one of those times,” Nick barked back. Ellie warmly shared, “I didn’t mean for us to happen” before pulling Nick into a  “goodbye” kiss and then walking away.

Is Bishop gone, or gone? UPDATE: Wickersham late Tuesday confirmed her exit from the show.

Elsewhere in the finale….

Gibbs came to suspect that the serial killer that he and Marcie had been tracking was onto them, following him around and bugging their homes. A bit of detective work by Gibbs revealed that with the latest murdered woman, the cops never searched for clues in the right area. So Gibbs, motoring along in his finally completed and somehow removed-from-the-basement boat (which he named “Rule 91”) and with Tom Petty blaring, headed out to the remote area… when the boat suddenly is blown to bits! We saw Gibbs’ seemingly lifeless body bob atop the water a bit in the aftermath… but only for a few seconds, before he discreetly swam away.

Gibbs’ “playing dead” act, presumably to root out the serial killer, would help accommodate any reduced presence by Mark Harmon in Season 19.  As CBS entertainment chief Kelly Kahl told Deadline just last week, “We take it year by year with Mark, we’d love to have him as long as he’d like to be here…. [W]e’re happy to work around his schedule.”

What did you think of Bishop’s deception/vanishing act, and Gibbs’ own bit of subterfuge?