This week on CBS’ NCIS, Special Agent Nick Torres (played by Wilmer Valderrama) gets a blast from his complicated past when Steven Bauer (Ray Donovan) guest-stars as his long-MIA father, Miguel.

What are the difficult details of the Torres men’s past? And how did their decades-long separation help turn Nick into the man he is today? TVLine spoke with Valderrama about this Tuesday’s illuminating episode, the growing Torres/Gibbs bond, an imminent “crossroads” moment for Nick and Ellie (Emily Wickersham), and this season’s you-better-watch-live! finale.

TVLINE | First off, congratulations on the Season 19 renewal….
Thanks! Yeah, it’s really cool when it works out that way. We as actors are always looking to find a job that’s reliable and sustainable and that we continue to love. That’s the goal, so we’re very happy. We’re very blessed.

TVLINE | In this landscape, you cannot take it for granted.
Absolutely not. You think about the challenges that we’ve experienced in the industry with the ever-revolving door of new platforms and new destinations for content, and having to cultivate and retain some type of audience that stays engaged and loyal to the time slot and all that. There are a lot of a variables. And then you add a pandemic to that…. Now is really a time for entertainment — we’ve needed it more than ever — so this is exciting.

TVLINE | Turning to this week’s episode, I was trying to refresh my memory: What all did we know about Nick’s dad before this?
We didn’t really know much, because Torres doesn’t really offer much up about his personal life. [Laughs] He doesn’t open the door on what journey he lived before he got to NCIS. I mean, we know that he was an undercover agent for eight to nine years, he was working international cases and things like that, so for him it was a very tough thing to adjust to working as a team in a stationary place as opposed to having to become different people to infiltrate and get the bad guys. His identity is a little mysterious, right? And that has been on purpose, by design.

But yeah, we’ve know he has a sister — in the episode where they introduced me, there was an attempt on her life, and her husband died during that attempt on her life. And I have a niece. But that’s all we know. But in this episode, we’re going to unravel way more than Torres is going to be comfortable with! You are really going to understand why Torres has that chip on his shoulder, and where he got this idea that he can just not be emotionally attached to anyone. You’re going to learn more about where he came from, what type of life he led when he was a kid, how he became man the is today…. What’s exciting about this episode is it pulls back layers and layers of subtext that for years now the fans have been asking about.

TVLINE | Talk about having Steven Bauer for your TV dad, because he’s got action-move bona fides, plus of course Scarface…. It’s pretty great casting.
Weeks before they started developing the episode, [the writers] came up to me, like, “Hey, we’re thinking about a Torres episode where we learn more about where he came from, and his dad not being around or possibly dead….” Immediately I remembered I had done a pilot for CBS called Four Stars, which was about two four-star general families, led by Bruce Greenwood and Steven Bauer, and Steven Bauer played my father in that pilot. It was this beautiful, amazing pilot — a real shame it didn’t go — but out of that pilot came CBS’ idea to offer me NCIS.

TVLINE | Full circle, man!
Full circle! So when the idea of my father came up, immediately I was like, “What about Steven Bauer?” And they were like, “Holy s–t. What about Steven Bauer!” It worked out perfectly. It is really well-developed, and the story is very personal for Torres, so I think it will be great for fans to see Steven play that character. I think we light the screen on fire together. 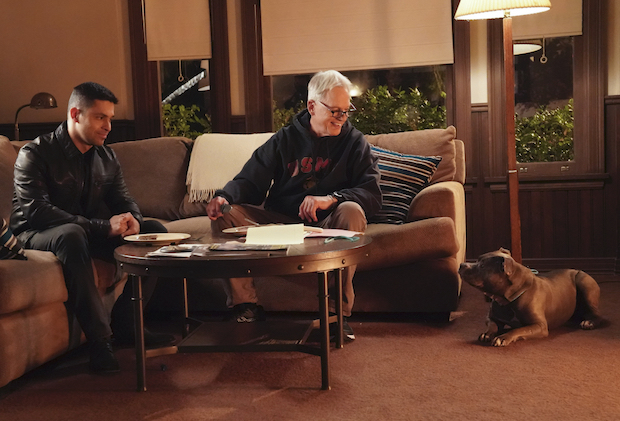 TVLINE | Without spoiling anything, I had a question about this week’s episode’s final scene. Torres shows up at Gibbs’ house, Gibbs is there eating a steak he just grilled in his fireplace…. And Torres gives him this look, with a specific sort of smile. What would you say that look was about?
That was a moment that we really hand-crafted — and we did that because Gibbs has become really an “accidental father figure” to Torres. For a time, Torres had no real direction as he was just going from mission to mission, and Gibbs gives him a family, one like he never had. To be honest, Gibbs in the past couple of years has been more of a father to Torres than anybody else. When Torres was hit by that car and was in the hospital, it was an emotionally available Gibbs, like you had never seen, who shows up. It was really interesting to see Gibbs be that concerned and attached to Torres, so this week’s scene — without giving away anything that it is built on — is kind of a commemoration of the unspoken bond they have. And you will see where that relationship goes from here; it’s a bit of a beacon of things to come. We built it that way because Torres is learning to be not just a team member but also a leader. With the show evolving into its 19th eason, it’s fun to peel those layers but also give those two characters more of that bond that the fans may want to see. 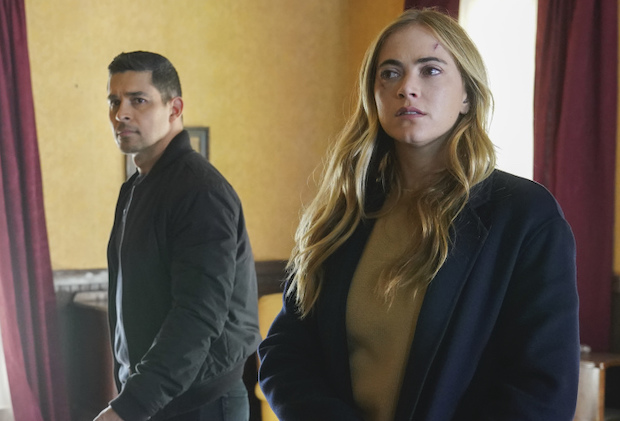 TVLINE | Back in January, there was that episode where Torres and Bishop – shortly after she nearly died — were trapped in adjoining cells in an old sheriff’s office’s, and she was standing on a pressure-sensitive bomb trigger…. And there was a gap in time where I felt like something could have happened, or been said, between them that the audience wasn’t privy to. Plus, there’s the whole, unaccounted-for COVID time jump. Is there any light to be shed on things that happened between them that we don’t yet know about?
Definitely this season, we will crack that. We’re coming to a crossroads for these two characters where they have to really be honest about who they are to each other and who they are to themselves. That’s something that I think the writers have done very well, in a breadcrumb type of way. The question of what they are outside of the badge is something that will be addressed this season. There is a big moment they are going to experience — and who knows, is it the moment they wanted, or a moment they didn’t want? [Laughs] Should they not break a Gibbs Rule, or should they just go for it? We’re going to play with that notion, and since there are only a few episodes left, I would say it’s coming up soon!

I think the writers did a brilliant job at putting together something the pandemic took away from us last year, a real season ender. I think we’re going to combine a lot of the seeds we planted through Season 17 and 18 and give the fans a real finale. Like, a real, explosive finale that a show whose loyal audience shows up live for deserves to see. I mean, we’re going to give people a lot to talk about. I’m not one to do the “You have to wait and see!” hype, but man, this episode is really unpredictable. I promise you that you’re not going to see any of this coming.

TVLINE | Does it in part lay a foundation for whatever Mark Harmon ends up deciding about his involvement next season? Whether he is around a little, or around a lot…?
I can only speak for Torres. I don’t play Gibbs, and it’s not my journey to comment on, but I will say that this episode is just badass, man. It’s a really emotional, controversial type of episode. There’s some action, there are things going on that the fans have been dying to see, and there are some answers they’ve been seeking. People are going to get answers to many of the questions.