The Powerpuff Girls won’t be swinging back into action anytime soon.

Powerpuff: Everything We Know (So Far)

As The CW moves forward with series orders for its All American: Homecoming spinoff as well as a Naomi comic book series adaptation (executive-produced by Ava DuVernay and Jill Blankenship), sources tell TVLine that the live-action Powerpuff pilot is being reworked and redeveloped off-cycle (meaning, not in time for Fall 2021 consideration).

That said, the live-action series’ four leads — Agents of S.H.I.E.L.D.’s Chloe Bennet. Descendants‘ Dove Cameron, Broadway vet Yana Perrault and Scrubs‘ Donald Faison, playing Blossom, Bubbles, Buttercup and Professor Utonium — as well as other cast, and the writers/producers will all remain involved in the project. 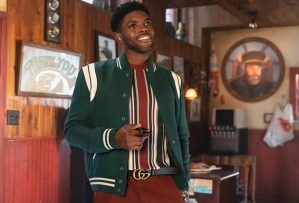 The prospective Nancy Drew spinoff, which would follow the recently introduced Tom Swift character (played by Tian Richards), also remains in consideration for a pickup at The CW.

According to our sister site Deadline, the network is not proceeding with either its Black Lightning spinoff Painkiller or its dramedy Our Ladies of Brooklyn, from Jane the Virgin boss Jennie Snyder Urman.

As for the lonnnnnng-gestation The 100 prequel y’all were just about to ask about, there remain no updates. But tomorrow is another day….