The CW is reinventing an iconic inventor.

Wednesday’s episode of Nancy Drew (The CW, 9/8c) introduces Tian Richards as Tom Swift, a literary character who has existed in various forms since 1910 — but you’ve never seen him like this before.

“The original Tom Swift was great for his time and what he represented,” Richards tells TVLine. “At the time, that was the face of young boys, All-American kids full of possibilities. But in 2021, that can look so different. It can look like someone like me — a Black guy who is chocolate, who is queer, who is all those things that we’re told aren’t the normal or the status quo.”

He continues, “If I had an opportunity to see someone like this exist when I was younger, just think of how much sooner I would have felt [more confident] in my skin and welcomed by the world. I had representation here and there, but it was usually a secondary character, or you felt like they were being stereotyped. Tom gets to exist in all of his beauty and pride. He gets to grow up in a family with a legacy, to have endless possibilities in education and tech and inventing. He gets to realize himself for himself, and that’s beautiful for anyone to see.”

The whole “billionaire” thing is really just the cherry on top, one that makes for some fun fashion moments.

“The costume designer got your boy in all the best drip,” Richards says. “I’m talking Dior, Alexander McQueen. I don’t want to be the guy who just names off a bunch of labels, but Tom is always clean. An outfit for every occasion, trust and believe. But don’t get it twisted — he’s ready to get down and dirty.”

Tom arrives in Horseshoe Bay on a “very specific mission” (no spoilers!), and it should come as no surprise that the man knows how to make an entrance.

“I don’t like to use the word cocky, but confident? Yes,” he says of Tom. “You have to walk into the room with your shoulders back, chest out, chin forward, knowing what you want. And I walked through the door the same way. That was one of the first things we shot, and I had to come ready. I had to announce my presence. Let it be known I’m here, I’m queer and I’m going to get s–t done. 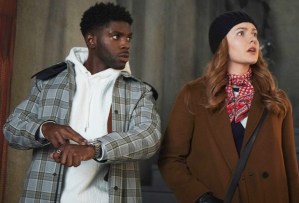 As for Tom’s relationship with Nancy, Richards likens their dynamic to another classic crime-fighting duo: Cagney and Lacey. You know, with ghosts.

“Tom is all about science and the paranormal, and Nancy’s more about ghosts and the supernatural,” he says. “We’re both dead set on our perspectives and our opinions, so you’ll see some clashing. Tom doesn’t go down without a fight.”

You can also expect Tom to speak for the audience, especially when Nancy and her friends need a reminder of just how abnormal their lives have become.

“Most of us now are used to the world of Nancy Drew and all these crazy things occurring, but if you were actually immersed in those things in real life, you’d be like, ‘What the hell?’ And that was me the whole time,” Richards says. “Nancy does and says things so casually, and Tom’s like, ‘Girl, I don’t know where you’re from, but my theories and my technology tell me otherwise.’ Tom is strictly science — he went to MIT, he studied, he did the things — and now you’re telling me all of that will be undermined by ghosts? Maybe he needs to learn the hard way, but he’s a Leo. He’s stubborn.”

Beyond simply introducing Tom into the Drew-niverse, Wednesday’s episode also serves as a potential backdoor pilot, should The CW decide to give the inventor his own spinoff. If that does come to fruition, Richards says there will be no shortage of material to explore down the line.

“We’re going to dive into so many sectors of identity,” he says. “We’re going to talk about Blackness — and a different kind of Blackness than we’re used to seeing, which is the Black elite, the 1 percent, the billionaires. We’re also going to talk about a queer boy’s journey into becoming a queer man. Not only self-acceptance, but acceptance as a whole, having the community and people around you. We also don’t shy away from the STEM world. You’ll see all the amazing gadgets and science, so it’ll also be deeply informative. You want to see the action along with the representation, and we tackle both things head on.”

Are you excited about Tom Swift 2.0? Hit PLAY on the promo below for a taste of Richards in action, then drop a comment with your thoughts.