A violent dust storm hit Austin on Monday’s 9-1-1: Lone Star finale, but even after it settled, the future of the 126 remained unclear.

Let’s start with Tommy, who began the hour by deciding to resign from her position in order to care for her daughters at home. (Charles’ life insurance turned out to be “more than she expected,” affording her the chance to become a full-time mom.) But after an especially eventful day of saving lives — which was encouraged by her daughters, who reminded Tommy that the world still needs her — she opted to remain in the game.

As for how she’s going to make that work, showrunner Tim Minear tells TVLine, “To me, that’s the story. Tommy is a young widow with two young kids. What is the path that she has to carve out for herself? How does she come out the other end of that? Her whole future is not what she thought it was going to be. She has to make some choices. That is fodder for story.”

With the 126’s base of operations still out of commission, Monday’s finale also saw the displaced team members scattered to various firehouses throughout the city. They hoped to reunite after repairing the station, until Billy revealed that his first act as the new deputy fire chief — a job offer Owen rejected earlier in the episode — was to shut down the 126 for good.

Minear won’t reveal exactly how things will play out, but it’s a “definite possibility” that the (former) members of the 126 will remain at their new firehouses when Lone Star returns for Season 3 in 2022. He also reminds us that we “just can’t trust Billy,” but that much was already clear. 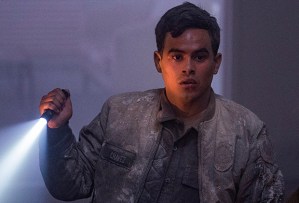 The real stand-out in this finale — besides Owen, who gave Billy a well-deserved punch in the face — was Mateo, who proved how much he’s grown by saving countless lives all by himself. And even though Owen may not be his captain anymore, Minear promises that “there’s much more to learn about Mateo.” He adds, “Julian Works is so underrated. He’s really going to surprise people. To me, he’s Jack Nicholson. You just don’t know it yet.”

And here’s a fun fact for all you American Horror Story fans: director Bradley Buecker used the same smoke machine to make Lone Star‘s dust storm that he used to craft the post-apocalyptic vibe in AHS: Apocalypse. “He has directed a lot of our big episodes, and he really knows how to go out there and just get it done,” Minear says.

Speaking of getting things done, this epic hour was just as much of an undertaking as it looked. More specifically, Minear says we have “no freaking idea” how much work it was.

“We finished shooting the elevator scenes on Tuesday [May 18], and I finished cutting it on Friday [May 21],” he says in slight disbelief. “But the way we pulled it off was very simple — we have an amazing crew; we have a cast that’s willing to roll with the punches; we have [executive producer] Rashad Raisani], who’s someone I can count on through fire and snow; and we have an amazing post-production team. We finished the mix yesterday morning — and that [co-executive producer] Jeff Dickerson got Fleetwood Mac’s ‘The Chain’ to clear! I didn’t think we were going to get it for that scene, but we did!”

Your thoughts on the 9-1-1: Lone Star finale? Hopes for next season? Grade the episode in our poll below, then drop a comment with your full review.